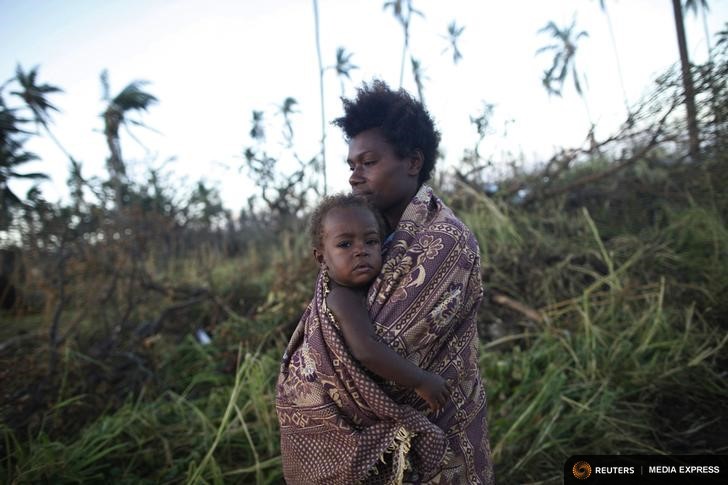 A woman carrying her baby walks past fallen trees in Tanna March 18, 2015. International aid agencies ramped up appeals for cyclone-hit Vanuatu, warning that the powerful storm which affected more than two-thirds of the South Pacific island nation had wiped out crops and destroyed fishing fleets, raising the risk of hunger and disease. Residents of the southern island of Tanna said food and basic supplies were running low while relief workers were still battling to reach many islands pummelled by Cyclone Pam’s gusts of more than 300 kph (185 mph) on Friday and Saturday. REUTERS/Edgar Su

LONDON (Thomson Reuters Foundation) – Just $160 per year for each person living in extreme poverty would eradicate world hunger by 2030, the United Nations said on Friday, recommending the money should be delivered through both cash transfers and “pro-poor” investments.

The SDGs will be finalised in September, but U.N. officials say member states have identified 17 goals and 169 targets. The second goal targets hunger, malnutrition and food insecurity.

“If we adopt a ‘business as usual’ approach, by 2030, we would still have more than 650 million people suffering from hunger,” said José Graziano da Silva, director general of the UN’s Food and Agriculture Organisation (FAO).

The new report, prepared by FAO, the World Food Programme (WFP) and the International Fund for Agriculture Development (IFAD), comes ahead of a major international conference on financing for development in Addis Ababa, Ethiopia next week.

The U.N. wants cash transfers to “eliminate hunger immediately” by bringing people up to the World Bank’s poverty line of $1.25 per day. It estimates this would cost $116 billion per year, $75 billion of which would go to rural areas.

To ensure the drop in hunger is sustainable, “pro-poor” investments of $151 billion per year are needed in areas such as irrigation, infrastructure and credit facilities on top of cash transfers, the U.N. said.

The total sum the U.N. says is needed each year is $267 billion. “Given that this is more or less equivalent to 0.3 percent of the global GDP, I personally think it is a relatively small price to pay to end hunger,” Graziano da Silva said in a statement.

Though much progress has been made in recent years, nearly 800 million people worldwide do not have enough to eat. Most live outside cities.

“We cannot allow them to be left behind,” said Ertharin Cousin, executive director of the World Food Programme.