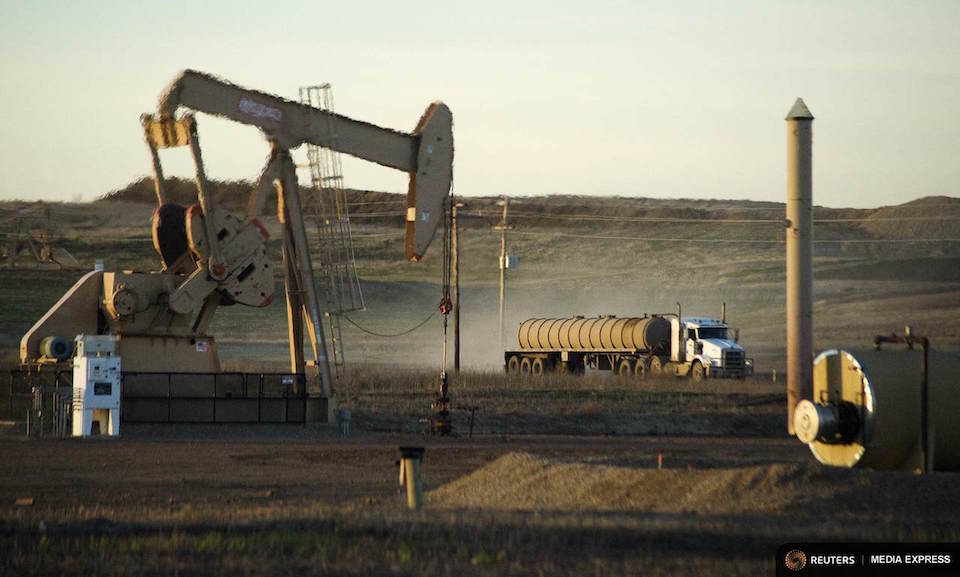 A service truck drives past an oil well on the Fort Berthold Indian Reservation in North Dakota, U.S. on November 1, 2014. REUTERS/Andrew Cullen/File Photo

President-elect Donald J. Trump has long pledged to undertake a profound policy shift on climate change from the low-carbon course President Obama made a cornerstone of his eight years in the White House.

“This very expensive GLOBAL WARMING bullshit has got to stop,” Trump tweeted a year ago.

In recent weeks, Trump doubled down, nominating champions of fossil fuels to several cabinet positions and peppering his transition team with longtime opponents of environmental regulations.

Both the rhetoric and the actions have provoked despair among many who fear a Trump presidency will tip the planet toward an overheated future, upending recent national and international efforts to stem emissions of heat-trapping carbon dioxide from burning coal, oil and natural gas.

But will a President Trump noticeably affect the globe’s climate in ways that, say, a President Hillary Clinton would not have?

In recent weeks, a variety of consultants tracking climate and energy policy have used models to help address that question. ProPublica asked Andrew P. Jones at Climate Interactive, a nonprofit hub for such analysis, to run one such comparison.

The chosen scenario assumes Trump’s actions could result in the United States only achieving half of its pledged reduction through 2030 under the Paris Agreement on climate change, the worldwide but voluntary pact aiming to avoid dangerous global warming that entered into force on Nov. 4.

In this scenario the difference — call it the Trump effect — comes to 11 billion tons of additional carbon dioxide emitted between 2016 and 2030. That number is huge — it’s the equivalent of more than five years’ worth of emissions from all American power plants, for instance.

But it’s almost vanishingly small in global context. Here’s why. Even if all signatories to the Paris pact met their commitments, the global total of CO2 emissions through 2030 would be 580 billion tons, with the United States accounting for 65 billion of those tons. The Trump difference could take American emissions to 76 billion tons, with that 11-billion-ton difference increasing cumulative global emissions by less than 2 percent.

This calculation assumes Trump’s effect is not as damaging as his rhetoric might suggest. Is that realistic? In interviews, more than half a dozen environmental economists and climate policy experts said yes.

They said this less because they see Trump moderating his stances and more because many of the targets set by Obama, and built on in Clinton campaign pledges, were based on shifts in energy use that are largely being driven by market forces or longstanding environmental laws that are relatively immune to the influence of any particular occupant of the White House.

These include polluting industries moving overseas, increasing industrial energy efficiency, a sustained shift away from coal to abundant, cleaner natural gas and wind, and a host of climate-friendly policies pursued by individual cities or states.

For instance, while Wyoming is among the 27 states fighting President Obama’s Clean Power Plan in court, the coal-rich state looks set to meet the emissions benchmarks in those power-plant rules, largely because of a giant wind farm poised to be built in, yes, Carbon County, and newly approved transmission lines to send electricity to states in the power-hungry Southwest.

It’s notable that while Trump’s choice for secretary of energy, former Texas Gov. Rick Perry, is a climate change contrarian, he’s credited by clean-energy champions with overseeing an enormous expansion of wind energy in his state. “Texas is a huge wind state, the biggest by far, and Rick Perry put in these transmission lines and made it wind friendly and that’s why they have such cheap electricity and no problems with reliability — none,” said Hal Harvey, a longtime climate and energy analyst who has advised past Clinton and Bush administrations and run a clean-energy foundation.

For many, this all hardly justifies a sigh of relief.

Indeed, many environmentalists reject the idea that any encouraging trends toward better energy choices are happening on their own. Many coal-fired power plants, they note, were stopped from being built only by lawsuits and political pressure brought by activist opponents, said Kierán Suckling, the founder of the Center for Biological Diversity, which uses the courts to limit harm to public lands and ecosystems.

“Industry and Republicans certainly don’t believe in a secular trend. Instead they have poured enormous resources into trying to amend or repeal old laws, pass new industry-friendly laws, strike down and influence Obama’s policies, and prevent activists from enforcing laws and policies,” Suckling said.

With Republicans controlling the White House and Congress, environmental groups are, in effect, “lawyering up,” vowing to counter any “drill baby drill” efforts with a “sue baby sue” response.

In the end, as global carbon-dioxide tallies reflect, such courtroom sparring, while important, is unlikely to have a game-changing impact on climate trajectories.

Much the same thing can be said of the lasting impact of American presidents. For nearly three decades, White House occupants have pledged to move the needle on climate change one way or the other, without terribly dramatic results.

In the scorching summer of 1988, when global warming first hit headlines in a significant way, presidential candidate George H.W. Bush used a Michigan speech to pledge meaningful action curbing heat-trapping greenhouse gases, saying, “Those who think we are powerless to do anything about the greenhouse effect forget about the White House effect.”

Despite a host of actions since that summer, including President George H.W. Bush signing the foundational climate treaty in Rio in 1992, you’d be hard-pressed to find evidence of such an effect in emission rates.

Globally, the “great acceleration” in emissions (that’s a scientific description) has largely tracked the growth in human numbers and resource appetites — particularly a seemingly insatiable appetite for energy, more than 80 percent of which still comes from fossil fuels despite sustained efforts to spread efficiency and renewable choices.

William Nordhaus, a Yale economist long focused on climate change policy, calls the global situation a high-stakes “climate casino.” He just published a working paper concluding that all policies so far have amounted to “minimal” steps that have had equally minimal effects.

Nearly three decades after that “White House effect” pledge, after eight years of sustained efforts by President Obama, including building a critical 2014 partnership with China, Nordhaus finds “there has been no major improvement in emissions trends as of the latest data.”

In the end, the main value of the climate calculations spurred by Trump’s election could be in refocusing attention on the true scope of the challenge, which some researchers have described as “super wicked” given how hard it has been, using conventional political, legal or diplomatic tools, to balance human energy needs and the climate system’s limits.

The Paris Agreement itself was far more a diplomatic achievement than a climatic one. Its 2030 pledges leave unresolved how to cut emissions of carbon dioxide essentially to zero in the second half of the century in a world heading toward 9 billion or more people seeking decent lives.

That plunge in emissions is necessary because unlike most other pollutants, carbon dioxide from fuel burning stays in circulation for centuries, building in the atmosphere like unpaid credit-card debt.

The real risk for climate change in a Trump presidency, according to close to a dozen experts interviewed for this story, lies less in impacts on specific policies like Obama’s Clean Power Plan and more in the realm of shifts in America’s position in international affairs.

Even if he doesn’t formally pull out of the climate treaty process, Trump could, for example, cancel payments pledged by the United States to a Green Climate Fund set up in 2010 to help the poorest developing countries build resilience to climate hazards and develop clean-energy systems.

President Obama has already paid in $500 million of the $3 billion commitment, with another $200 million potentially paid before he leaves office next month. Environmentalists last week pressed in an open letter for the full amount to be paid before Trump takes office.

“If the U.S. walks from its commitment, I would think it would be difficult for the other OECD countries to sustain donations, and if those donations are not sustained, developing countries will focus on growth as opposed to low carbon growth,” said Henry Lee, a Harvard scholar working in and studying climate policy for decades.

But in international affairs, Trump and his proposed secretary of state, Rex Tillerson, the Exxon chairman, will confront a world of intertwined interests in which climate change has moved from being an inconvenient environmental side issue in the early 1990s to a keystone focal point now, said Andrew Light, a George Mason University professor focused on climate policy.

Light, who served on Obama administration negotiating teams in the run-up to the Paris accord, said such intertwined interests will be thrust upon the Trump administration starting this spring and summer in venues like the annual Group of 7 and Group of 20 meetings of the globe’s most powerful countries.

“Those groups have committed to action using very strong climate and energy language,” he said. “The way we got so many leaders to come to Paris and make this happen and ended up getting an even more ambitious agreement than we expected was by breaking climate diplomacy out of its silo — and making it sort of a peer issue to questions like trade and security. In this world you can’t just walk away from all this stuff.”

Given how Trump appears to be relishing his position as a wild card and a self-described master of the deal, it’s still impossible to say what will unfold starting January 20.

In a blistering speech to thousands of earth scientists in San Francisco earlier this month, California Gov. Jerry Brown vowed to fight Trump in the near term using that state’s influence on everything from automobile standards to the national laboratories, which are managed by the University of California system.

But he also accurately described the climate challenge for what it is: “This is not a battle of one day or one election. This is a long-term slog into the future.”

This story was produced by ProPublica, a Pulitzer Prize-winning investigative newsroom, and is republished here under a Creative Commons licence.

Help Us Investigate: If you have experience with or information about this topic, email andy.revkin@propublica.org.  Sign up for ProPublica’s newsletter.