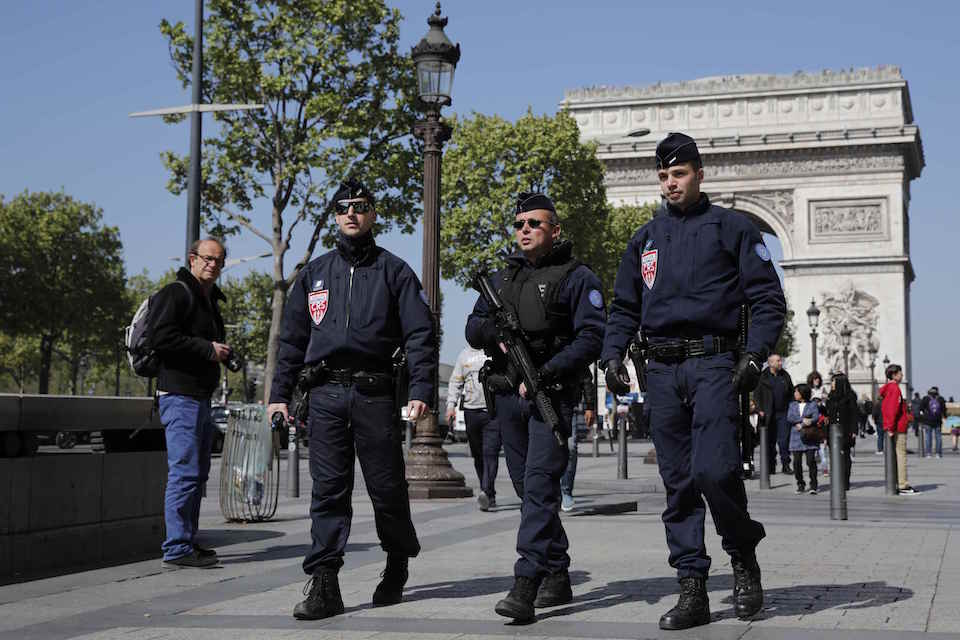 Related story: French election a pivotal European test. Above, French CRS police patrol the Champs Elysees Avenue the day after a policeman was killed and two others were wounded in a shooting incident in Paris, France, April 21, 2017. REUTERS/Benoit Tessier

PARIS (Reuters) – The killing of a policeman by a suspected Islamist militant pushed national security to the top of the French political agenda on Friday, two days before the presidential election.

With the first round of voting in the two-stage election taking place on Sunday, far-right nationalist candidate Marine Le Pen promised tougher immigration and border controls to beat “Islamist terrorism” if elected.

Centrist Emmanuel Macron, who narrowly leads a tight race ahead of Le Pen, said the solutions were not as simple as she suggested, and that there was “no such thing as zero risk”.

Anyone who said otherwise was irresponsible, said Macron, a former economy minister in the government that Le Pen has repeatedly criticised for its security record.

There are four leading candidates in a race that is still too close to call. Sunday’s voting will be followed by a runoff on May 7 between the top two candidates.

While he was still seen winning the first round with 24.5 percent, his score slipped half a percentage point while Le Pen’s rose by one to 23 percent.

Conservative Francois Fillon, a former prime minister, and the far left’s Jean-Luc Melenchon were both down half a percentage point on 19 percent in the Odoxa poll for the newspaper Le Point.

The attack on the Champs-Elysees boulevard in the very heart of the capital added a new source of unpredictability to an election that will decide the management of France’s 2.2 trillion euro economy, which vies with Britain for the rank of fifth largest in the world.

U.S. President Donald Trump told the Associated Press on Friday he thought the attack will “probably help” Le Pen because she is the candidate who is “strongest on borders, and she’s the strongest on what’s been going on in France.”

Trump told the AP in an interview he was not explicitly endorsing Le Pen but that he believes the attack will affect how French people vote on Sunday.

The outcome could also have a bearing on France’s place in the world and in a European Union still reeling from Britain’s decision to leave. While Macron is ardently pro-EU, Le Pen wants to quit its single currency and potentially hold a referendum on leaving the bloc.

All the candidates are seeking to woo the huge number of undecideds – some 31 percent of those likely to vote, according to an Ipsos poll on Friday.

Fillon also seized on the attack, which was claimed by the militant group Islamic State, saying the fight against “Islamist totalitarianism” should be the priority of the next president. “It’s us or them,” he said.

Financial markets, though, shrugged off the latest twist in the campaign, with French benchmark bond yields hitting a three-month low.

The Champs-Elysees shooting is the latest in a series of attacks by Islamist militants on France since 2015, in which more than 200 people have been killed. A truck ploughed into a Bastille Day crowd in Nice last year, killing more than 80, while coordinated attacks on the Bataclan concert hall and other sites in Paris claimed about 130 lives in November 2015. There have also been attacks on a satirical weekly and a kosher store.

However, previous attacks that have taken place shortly before elections, including the November 2015 attacks in Paris ahead of regional polls, and a shooting in a Jewish school before the 2012 presidentials, did not appear to boost the scores of those espousing tougher national security.

An assault on a soldier in February at Paris’s Louvre museum by a man wielding a machete also had no obvious impact on this year’s opinion polls, which have consistently said that voters see unemployment and the trustworthiness of politicians as bigger issues.

One policeman was shot dead and two others were wounded in Thursday night’s attack.

Investigators are trying to assess whether the gunman had accomplices, anti-terrorism prosecutor Francois Molins told a news conference, adding that the shooter had never shown any signs of radicalisation despite a long police history.

After an emergency meeting of security officials, Prime Minister Bernard Cazeneuve said security forces, including elite units, were on alert to back up the 50,000 police earmarked to ensure safety during the election.

“The government is fully mobilised. Nothing must be allowed to impede the fundamental democratic process of our country,” Cazeneuve told reporters. “It falls to us not to give in to fear and intimidation and manipulation, which would play into the hands of the enemy.”

Controls on immigration and national security are cornerstones of Le Pen’s National Front agenda, and on Friday she said she would reinstate border checks and expel foreigners who are on intelligence services’ watch lists.

Macron was quick to respond.

“I’ve heard Madame Le Pen saying again recently that, with her in charge, certain attacks would have been avoided,” he told RTL Radio. “There’s no such thing as zero risk. Anyone who pretends (otherwise) is both irresponsible and deceitful.”

In an Elabe poll conducted on Wednesday and Thursday, and published on Friday, both Fillon and Melenchon were seen narrowing Macron and Le Pen’s lead.

Should both Macron and Le Pen make it to the second round, he was likely to win the runoff by 65 percent to 35, according to the survey for BFM TV and L’Express magazine.

Fillon, who has slowly clawed back some ground lost after a fake jobs scandal, saw his score in the first round rise half a percentage point to 20 percent.

Melenchon, who would hike taxes on the rich and spend 100 billion euros ($107 billion) of borrowed money on vast housebuilding and renewable energy projects, gained 1.5 points to 19.5 percent as he built further on the momentum he has generated with strong performances in television debates.

If Melenchon makes it to the runoff, he was projected by the survey to beat either Le Pen or Fillon by comfortable margins, although he was seen losing to Macron by 41 percent to 59.

Next story:  French election a pivotal European test, analysis by Richard Maher: French voters go to the polls on April 23 for the first round of what has been the most unorthodox, unpredictable and potentially momentous presidential contest in recent French history. It could have repercussions far beyond the continent.