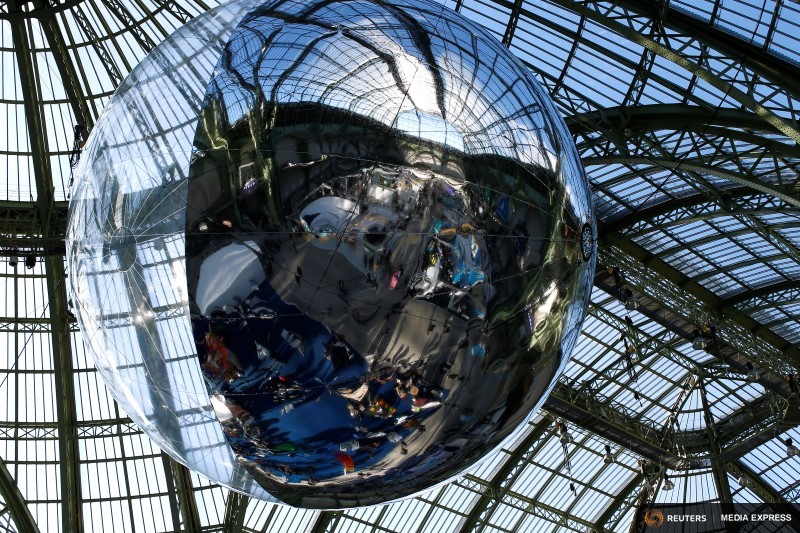 Visitors and ecological stands are reflected on a giant ball suspended from the roof of the Grand Palais during the Solutions COP21 in Paris, France, December 4, 2015 as the World Climate Change Conference 2015 (COP21) continues at Le Bourget near the French capital. REUTERS/Benoit Tessier

PARIS (Reuters) – Global climate change talks in Paris moved into a new, tougher phase on Saturday as negotiators agreed on a draft accord, albeit one that still leaves hundreds of points of dispute for ministers to resolve next week.

While a largely procedural step in the four-year quest for a binding deal to slow global warming, the fact that senior officials from almost 200 nations agreed on a draft marks an advance over the last, failed summit in Copenhagen six years ago.

French Foreign Minister Laurent Fabius warned that much work lay ahead to reach an accord by the end of the conference on Dec. 11 that will bind both rich and poor nations to combat global warming beyond 2020.

“We are not discussing just the environment, the climate. It’s life,” he told delegates. “We have to succeed here.”

The top delegate from China, Su Wei, said the first week of the talks “though very difficult, have produced very good results and provide a strong foundation for next week”.

Even so, the new text highlights how much work remains to be done for ministers including U.S. Secretary of State John Kerry, in finding consensus on issues that have bedevilled talks for four years.

Some developing nations want to phase out fossil fuels by 2050, for instance, but China, the biggest emitter of greenhouse gases, is among those preferring to promise merely to shift to a low-carbon economy this century.

An agreement at the U.N. summit on the outskirts of Paris is expected to represent by far the strongest global accord yet to commit both rich and developing nations to curbing the rise in the emissions responsible for climate change, even though officials say it will not be enough to prevent global temperatures rising beyond a dangerous threshold.

“All the difficult political issues remain unsolved and will be solved by the ministers,” European Climate and Energy Commissioner Miguel Arias Canete said. “It’s easier to get a weak agreement than a strong agreement.”

An accord will not define specific measures or targets, which are being undertaken at a national level.

But it should create a legal framework on key issues such climate finance for developing nations, beyond a goal of $100 billion a year already set for 2020, and set a long-term goal for the shift from fossil fuels.

The text, running to 43 pages including a 21-page core agreement, leaves most of those issues to be worked out.

“We had hoped that our work would be further advanced,” said Nozipho Mxakato-Diseko of South Africa, who speaks on behalf of more than 130 developing nations. She said rich nations should lead in cutting emissions, and provide more finance.

Many participants noted that the Copenhagen conference never even got as far as a formal draft laying out the options.

“The situation couldn’t be more different from Copenhagen … when delegations were more interested in grandstanding,” said Richard Black, director of the Energy and Climate Intelligence unit think-tank.

He said the chances of a deal next week “now look pretty good”.

All sides agree that the promises made so far for curbs on greenhouse gas emissions still fall far short of what is needed to limit global warming to a U.N. goal of 2 degrees Celsius (3.6F) above pre-industrial times.

But some developing nations said the new text showed a widening acceptance by rich nations to help them to cope with loss and damage from major impacts of climate change, such as droughts, floods, hurricanes or sea level rise.

“Two years ago, the discussion was whether loss and damage existed,” Saint Lucia Environment Minister James Fletcher said. Now, he noted, options on loss and damage were part of the core draft text.