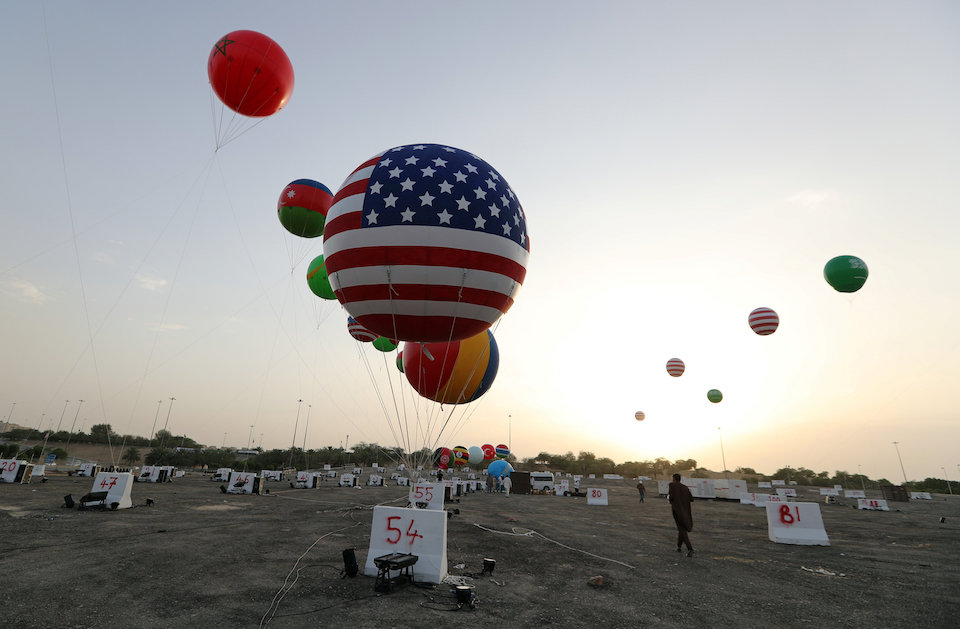 A worker walks past a balloon with a United States flag on it as part of welcome celebrations ahead of the visit of U.S. President Donald Trump, in Riyadh, Saudi Arabia May 19, 2017. REUTERS/Hamad I Mohammed

DUBAI (Reuters) – U.S. President Donald Trump, departing from his predecessor’s practice, is expected to sidestep human rights questions when he meets Gulf Arab leaders at the weekend and focus, to the dismay of beleaguered government critics, on business and security.

Civil liberties monitors point to freedom of expression as a right increasingly constrained in Gulf Arab states including summit host Saudi Arabia, which is planning to buy tens of billions of dollars’ worth of U.S. arms.

Gulf Arab states began stepping up the muffling of political discussion in the dying months of former president Barack Obama’s term and have continued this under Trump, they say.

“Given Trump’s tenuous relationship with freedom of the press and free expression in general, we have no expectation that Trump would raise these issues during his visit,” said Adam Coogle, Middle East researcher at Human Rights Watch.

In Washington, a senior Trump administration official said human rights would not take centre stage in Riyadh, where Arab leaders are expected to discuss combating Islamist militancy and what they see as the growing influence of adversary Iran.

The official said Trump preferred to keep such conversations private, much as he did with Egyptian President Abdel Fattah al-Sisi recently when he obtained the release of an Egyptian-American humanitarian worker.

Trump’s visit is likely to contrast with one Obama paid to Egypt in 2009 when he made an appeal to the Muslim world promoting self-determination, democracy and individual rights.

The Saudis “don’t want any more talk about human rights, democracy, political reform or gender equality. They had enough of that from Barack Obama and Hillary Clinton,” said Bruce Riedel of the Brookings Institution think tank in Washington.

“They’re pretty confident they’re not going to hear it from Donald Trump.”

While experts are not surprised, since the Gulf states’ monarchies abhor discord and dislike free-wheeling political debate as practised in the West, they are nevertheless dismayed.

The output of several columnists, economists and clerics in regional powerhouse Saudi Arabia and some of its smaller neighbours has either dried up or grown circumspect since the second half of 2016 in what critics see as an unacknowledged state drive to stifle public criticism, rights monitors say.

Among those who have fallen silent are critics, both liberal and conservative, of the kingdom’s ambitious plan to diversify the economy and open up the country culturally under a plan known as Vision 2030.

Until late last year Saudi writer Jamal Khashoggi commented about issues including Trump’s rise to power on social media and a column in the pan-Arab al-Hayat daily. He also spoke in public appearances at think tanks.

In December, news circulated on social media that Kashoggi, former editor of the Arabic-language al-Watan daily, one of the kingdom’s top newspapers, had been ordered to stop writing or Tweeting. His account has been silent since November last year.

Since the 2011 Arab Spring, Gulf states have stepped up efforts to curb dissent with tough new cybercrime laws, sentencing offenders to prison terms for Web posts deemed insulting to rulers or threatening to public order.

But in the past two years, unnerved by low oil prices and the slow progress of a war in Yemen targeting the influence of arch foe Iran, Gulf authorities became even less patient with dissenting voices in the media, analysts and rights groups say.

Madawi Al-Rasheed, visiting professor at the Middle East Centre, London School of Economics, said Riyadh was engaged in an effort to muzzle intellectuals with “dissenting voices”.

“There are so many of them, both men and women, who have left the kingdom,” she said.

Activists say muzzled writers include economists, academics, columnists and Muslim clerics. There are no precise figures on how many have been affected, but estimates by activists put the number at more than 20 from Saudi Arabia alone.

While some were merely advised not to air their views on social media, more vocal critics have found themselves behind bars, facing possible indictments on charges such as disobeying the ruler or incitement against the state, rights activists say.

“The pursuit by security is increasing rapidly and … it is killing the voice of moderation,” said Walid Sulais, a Saudi rights activist who fled abroad in late 2016 after authorities summoned him for questioning over his rights work.

Gulf Arab officials did not respond to requests for comment on the issue of free expression. But asked about the expected absence of human rights from Trump’s agenda, Saudi Foreign Minister Adel al-Jubeir said the issue was one of definition.

“Every Saudi has the right to petition his monarch or the governors. The doors of our leaders are open. We have built institutions. We have a thriving press corps. We have a consultative council that started with 60 members, today it has 150 members, and 30 of them are ladies, distinguished ladies.”

Gulf states have increasingly chafed at what they see as a campaign of vilification by Western media and rights groups. They insist they respect rights which do not violate Islamic Sharia laws and their societies’ conservative traditions.

Political parties are banned in Saudi Arabia as are protests, unions are illegal, the press is controlled and criticism of the royal family can lead to prison. Riyadh says it does not have political prisoners, while top officials have said monitoring activists is needed to keep social stability.

In a statement on Jan. 15, Bahrain’s information minister scolded Gulf media, warning outlets to “shoulder their responsibilities” and counter foreign attempts to “spread sedition” in Gulf states – an apparent reference to Iran which

Iran denies interfering in the affairs of Gulf states.

Other Gulf countries, including the United Arab Emirates, Qatar and Oman, have also been accused by rights groups of curbing free expression. In Qatar, activists noted that Faisal al-Marzoqi, a prominent commentator with more than 100,000 Twitter followers, had not tweeted since November 2016.

The UAE said on March 21 it had arrested political activist Ahmed Mansoor, an electrical engineer and poet, on charges of spreading sectarianism and hatred on social media, a move criticised by Amnesty International.

Defending the move, Mohammed al-Hammadi, editor of the pro-government al-Ittihad newspaper, wrote that Mansoor “either will be convicted or will be cleared through the rule of law and the justice of the judiciary, so what is the problem with this?”

In a Twitter post on Feb. 23, Owayed wrote in apparent reference to liberalising reforms: “Any decision-maker who thinks he can change the faith and identity of this country by opening the doors to decadence would be calling for a war in which he would be the main loser, no matter who he is.”

“When he is meeting with his counterparts from Saudi Arabia and other Gulf countries there, he should be equally as clear that any counter-terrorism efforts must include safeguards to protect the rights of individuals to express their opinions and assemble peacefully,” Philip Luther, Amnesty International’s director for the Middle East and North Africa, told Reuters.