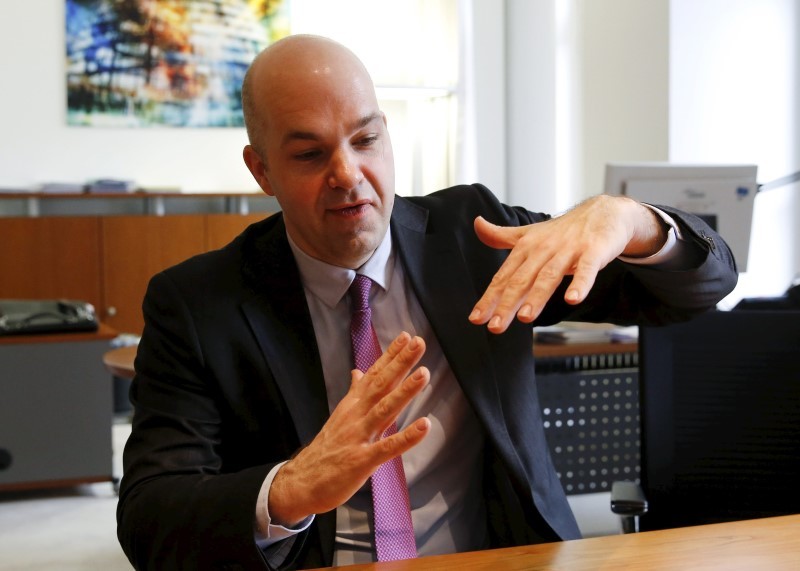 Marcel Fratzscher, chairman of the German Institute for Economic Research, speaks during an interview with Reuters in his office in Berlin, Germany REUTERS/Fabrizio Bensch

BERLIN (Reuters) – Marcel Fratzscher is not your typical German economist.

Educated at Oxford and Harvard, he often writes the first drafts of his papers in English. When asked whose work inspired him, he names Amartya Sen, a Nobel Prize-winning Indian economist and philosopher.

And in contrast to many of his domestic counterparts, Fratzscher does not believe the German economy and the special brand of rules-based governance – Ordnungspolitik – that has shaped it since World War Two is a model that others should emulate.

In fact, the 45-year-old president of the German Institute for Economic Research (DIW) in Berlin, has made a name for himself in recent years by exposing flaws in the German economy and daring policymakers to fix them.

In his 2014 book “Die Deutschland Illusion”, he argued that what was being hailed by politicians and the media as a second German economic miracle was little more than a mirage that masked deep-seated problems, including a massive investment shortage that had left German roads and bridges crumbling.

On Monday March 14, Fratzscher releases a new book, called “Verteilungskampf” (The Distribution Battle), which tackles what he says is another fantasy: the notion that Germany is a nirvana of economic and social equality – more caring Scandinavia than callous United States.

In the book he calls Germany a country of “enormous inequality” in which income, wealth and opportunities are distributed “more unequally than in almost any other industrialised country”.

“We live in denial in Germany,” Fratzscher said in an interview in his Berlin office near the Gendarmenmarkt square.

Some economists may challenge his argument. Germans earn more per capita than virtually all of their European counterparts, have one of the highest savings rates in the bloc and are enjoying record-high employment levels.

A report by the Paris-based Organisation for Economic Cooperation and Development (OECD) last year showed Germany scored better than average on most measures of inequality.

But Fratzscher clearly hopes the book will encourage politicians to tackle reforms of the German education and tax systems, which he says have fuelled inequality.

It seems sure to make waves at a time when many Germans are worried that an influx of refugees could erode their living standards. On Saturday, Der Spiegel magazine did a cover story linked to the book with the title: “Divided Nation”.

“Germany in 2016: the rich are getting richer and the poor remain poor,” Spiegel said. 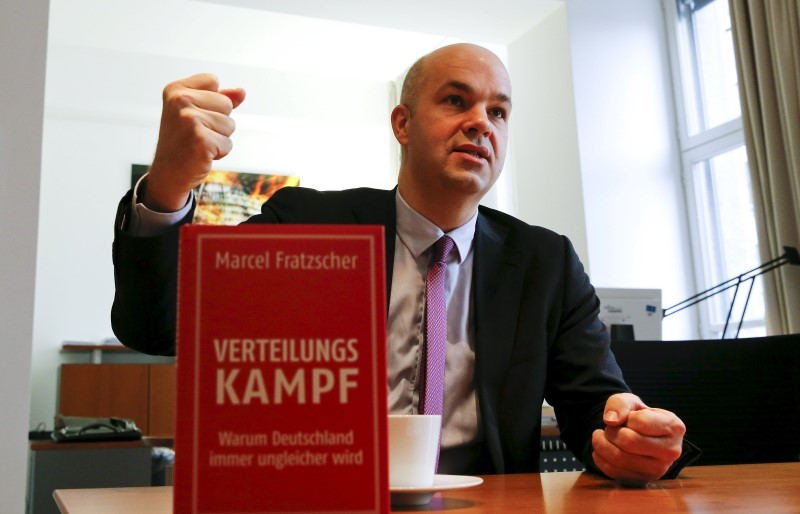 Marcel Fratzscher, president of the German Institute for Economic Research (DIW), introduces his new book “The Distribution Battle – Why Inequality in Germany is Rising” as he speaks during an interview with Reuters in his office in Berlin, Germany, March 7, 2016. REUTERS/Fabrizio Bensch

“Verteilungskampf” also establishes Fratzscher, who ran the international policy analysis division at the European Central Bank (ECB) before joining the DIW in 2013, as one of the most influential economists in Germany – a successor of sorts to Hans-Werner Sinn, the president of the Munich-based Ifo institute, who is due to retire at the end of March.

Sinn, with his signature chin strap beard, has been a staunch defender of German orthodoxy. He opposed bailouts for Greece and other struggling euro members during the bloc’s financial crisis and condemned steps by the ECB to stem the turmoil, sometimes finding support from politicians like Schaeuble.

Fratzscher is the anti-Sinn. He broke with the mainstream in lauding the economic benefits of the euro at the height of the crisis and now talks about how an influx of hundreds of thousands of refugees will be good for German growth.

His stances have drawn criticism from conservative voices such as the Frankfurter Allgemeine Zeitung newspaper. In the world of German economists, some view him as an apostate.

“He’s one of the few economists in Germany who is challenging the traditional conservative view represented by people like Sinn,” said Henrik Enderlein, a professor of political economy at the Hertie School of Governance.

Fratzscher jokingly refers to himself as a “bad German” because he studied abroad.

“If there is a common thread to my books it’s the message that Germany has been somewhat arrogant, that it has been deluding itself,” Fratzscher said.