Aleppo will fall, but Syrian war will go on — Analysis 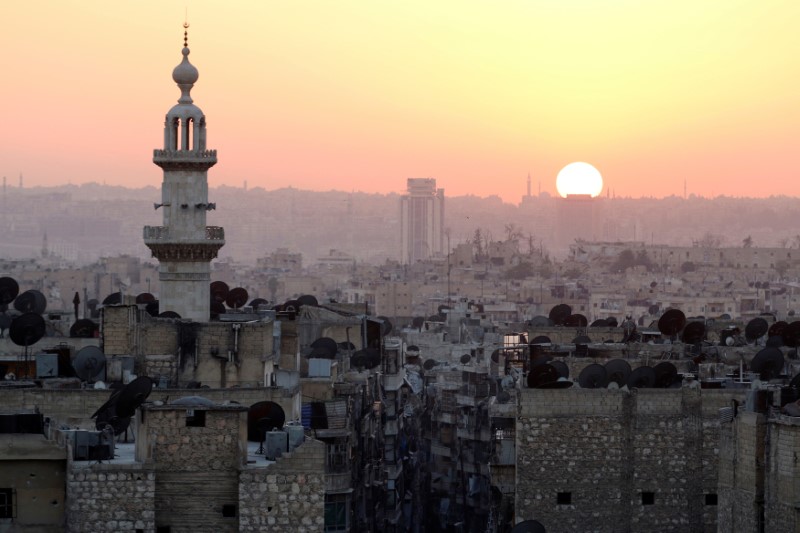 The sun sets over Aleppo as seen from rebel-held part of the city, Syria October 5, 2016. REUTERS/Abdalrhman Ismail 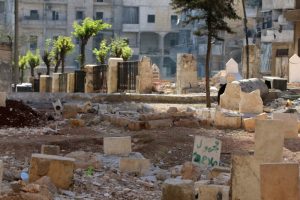 A public garden converted to a graveyard due to overcrowding is pictured in the rebel held Salah al-Din neighbourhood of Aleppo, Syria October 6, 2016. The text on the grave reads in Arabic: “Unknown, Salah allah.” REUTERS/Abdalrhman Ismail

BEIRUT (Reuters) – It may take weeks or months, but Aleppo is likely to fall to Syrian government forces backed by Russian air power and the most lethal bombardment in nearly six years of war.

Capturing the strategically important city, an economic and trading centre which is key to controlling Syria’s northwest, would be an important military triumph for President Bashar al-Assad and his Russian and Iranian allies.

It would be a crippling setback for the Western-backed Syrian rebels who, without quick reinforcements from their foreign backers, look set to be bombed out of their stronghold.

But the fall of Aleppo will not mean an end to the war, military and political analysts say.

Instead it is likely to give way to a long-term Sunni guerrilla insurgency in which the remaining moderate rebel groups, backed by the West and the West’s regional allies, are driven into the arms of militant jihadis.

In a war with so many global and regional actors backing local clients, Assad will survive as leader of a shrunken, broken and fragmented country enduring the world’s worst refugee crisis since World War Two.

“The Russians are doing in Aleppo and Syria what they did in Grozny — it is the same”, said Robert Ford, the U.S. ambassador to Syria in 2011-14, referring to the fierce bombardment that all but destroyed the capital of Russia’s Chechnya region during Moscow’s 1999-2000 war against Islamist separatists there.

The opposition to Assad, he told Reuters, will “go from holding territory … to being an insurgency, a guerrilla war, and that will continue a long time.”

Syria’s war began in 2011 after a popular uprising, against the Assad family’s more than four-decade rule, that was inspired by the Arab Spring revolts across the Arab world.

The war, pitting rebels mostly from Syria’s Sunni majority against a minority rule rooted in Assad’s Alawite community, has killed more than 300,000 people. Half the population has been displaced and much of urban Syria has become a wasteland.

There have been moments during the conflict when it looked like Assad might be toppled. Russia sent its air force to bolster Iran-backed militias a year ago when Moscow and Tehran feared Assad was on the point of succumbing to rebel offensives.

The bombing of eastern Aleppo, with a pro-Assad force on the ground spearheaded by seasoned Iran-backed fighters such as Lebanon’s Hezbollah and Iran’s Revolutionary Guards, is meant to deal a decisive blow against the rebels. 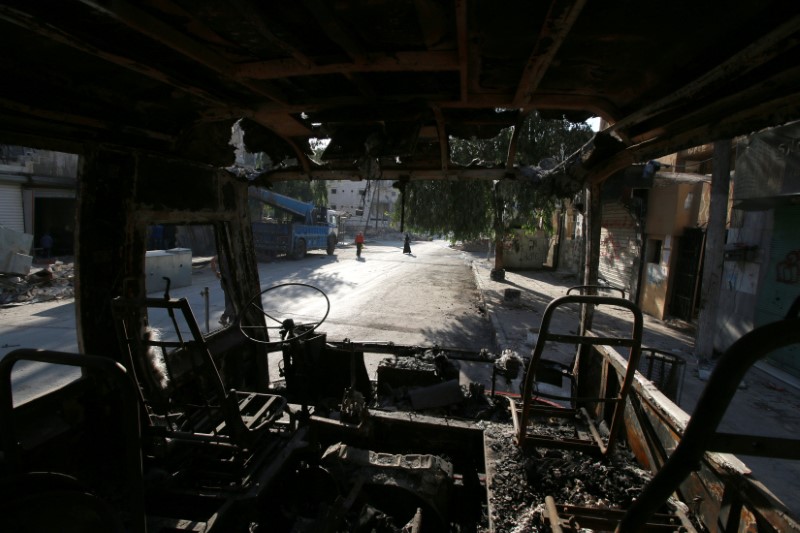 ASSAD LUCKY WITH FRIENDS AND ENEMIES 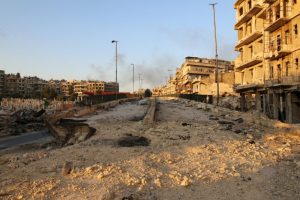 Russian President Vladimir Putin and Iran’s clerical leaders have not wavered in their support for Assad.

But the backers of the rebellion — ranging from the United States to Turkey and the Gulf — have been wary of being sucked into a Levantine quagmire and unnerved by concerns that Islamic State will fill the vacuum if Assad’s rule implodes.

Yet, despite the ferocity of the bombardment of eastern Aleppo, it may be too soon to count the rebels out.

Assad loyalist forces encircled the opposition enclave in July. But with manpower shortages, the Syrian army could not keep step on the ground with the Russian aerial assault. In August, rebels broke through government lines southwest of Aleppo, opening a corridor and briefly lifting the siege.

As a harbinger of the future, the rebel counter-offensive was led by Nusra Front, the jihadi force that had just split from Al Qaeda and rebranded itself as the Jabhat Fateh al-Sham, or Front for the (Islamic) Conquest of the Levant.

Even while negotiating the terms of a short-lived ceasefire with Washington, Russia kept bombing the corridor south of Aleppo. When the brief break in hostilities ended, the intensity of the bombing increased.

The Russian and Syrian forces have been using much more powerful “bunker-buster” bombs, which residents of opposition-held areas say have the force to bring down entire buildings. 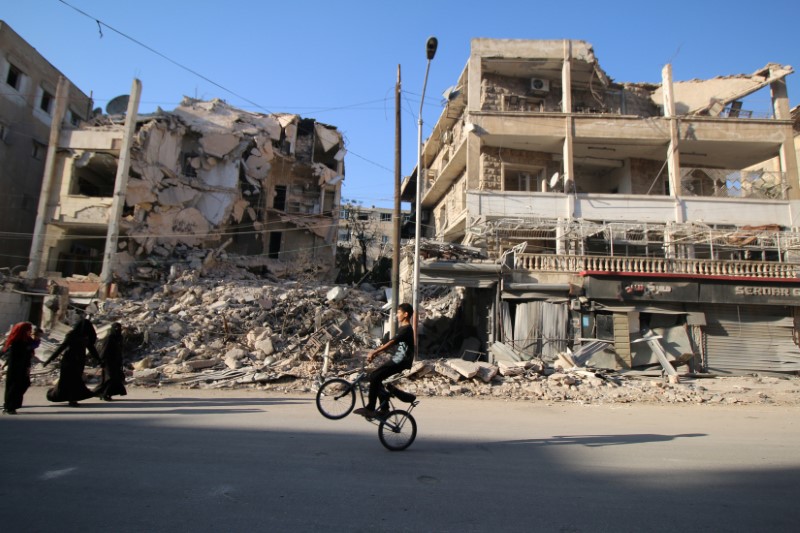 A boy plays with a bicycle past damaged buildings in the rebel held Seif al-Dawla neighbourhood of Aleppo, Syria October 6, 2016. REUTERS/Abdalrhman Ismail

Western countries say Syria’s government and its Russian allies are guilty of war crimes for targeting civilians, aid deliveries and hospitals. Moscow and Damascus say they target only militants and deny they have hit hospitals.

Despite the intensity of the bombing, the opposition are unlikely to stop fighting, not least because the Syrian establishment has left it nowhere else to go.

“Aleppo is not a turning point, not yet,” said Ford, who is now a senior fellow at the Middle East Institute in Washington who has criticised U.S. President Barack Obama for failing to arm the mainstream rebels.

“It shows that the (Assad) regime is winning the war now but there will be no end to the war because the opposition will continue to fight,” he said. “Aleppo will fall but it may not be quick, it may take one year but it will fall.”

Rolf Holmboe, a former Danish ambassador to Lebanon, Syria and Jordan who is now a research fellow at the Canadian Global Affairs Institute, says Aleppo’s fall would be devastating for the rebels, who have used it as a major hub throughout the war.

“The rebels will be isolated in enclaves. The regime will continue attacking one after another without difficulty,” he said. “If Aleppo falls, it will be a strategic loss for the rebels … Now there is no getting around the fact you have to make peace with Assad –- basically he would have won the war.”

Holmboe considers it would be very difficult for the West or Turkey to resupply rebels in Aleppo — even supposing they wanted to — and that Russia and Assad have unleashed a two-pronged attack on eastern Aleppo.

Like Ford, he drew comparisons with Russia’s bombardment of Grozny. 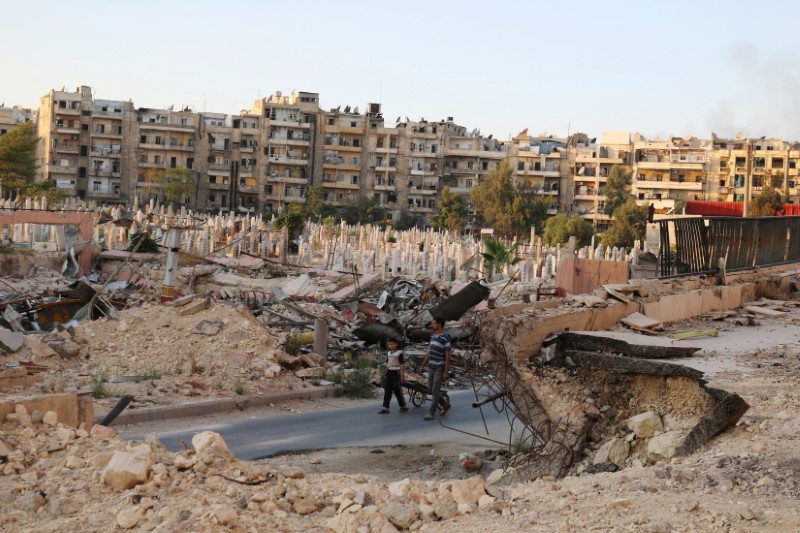 Crucial to the outcome of the war in Syria is the stance of external powers: how much they support their Syrian proxies and how they interpret their interests in a conflict with regional and global ramifications.

Russia and Iran not only want to salvage Assad but also hope to establish themselves as regional or global powers, though such goals leave Moscow with little way out of a conflict that could be a huge financial burden.

Under Obama, whose presidency ends in January, the United States seems to have more limited goals — the main one being to drive Islamic State out of its strongholds in Iraq and Syria.

Washington’s attention is divided, with the U.S. presidential election campaign nearing a climax and U.S. forces also focusing on driving IS out of Mosul and Raqqa.

Gulf Arab countries, which supply weapons and funds to the Syrian opposition, have also been distracted — by a war in Yemen against Houthi rebels aligned to Iran, their regional foe.

Ford said some regional powers could have more influence in Syria but no longer had the stomach for the war.

Jordan, he said, has all but shut down a supply route it ran for the so-called southern front of the rebel Free Syrian Army.

Turkey, which backs the Syrian rebels, is now preoccupied with halting Syrian Kurdish advances near its border. It has diverted its proxies away from Aleppo to fight Kurdish militia crossing west of the Euphrates river at the Syrian city of Jarablus, a move seen by some Syrian rebels as ruinous.

But it remains important for Ankara that the rebels are not defeated, not least because this could increase the flow of refugees to Turkey, which is already sheltering 3 million people who have fled the conflict.

Holmboe foresees the rebels becoming “isolated in various enclaves”, with Assad in control of all big cities and “able to dictate a peace solution on his own terms”.

“Maybe it’s going to take five years, maybe it will take 10 years … (but) he (Assad) will be the leader of a broken country,” Ford said.

Sarkis Naoum, a leading Arab commentator, predicted a protracted conflict and the de facto partitioning of the country. But he suggested countries in the region would opt to increase their arming of rebel groups.

“The Gulf states are not pleased with the way things are going. They’re willing to repeat the experience of Afghanistan,” he said in reference to the 1980s when they supplied arms for the Mujahideen to fight the Soviet Union.

“For them this is the war of the century.”