How do you mine Bitcoin – and is it still worth it? 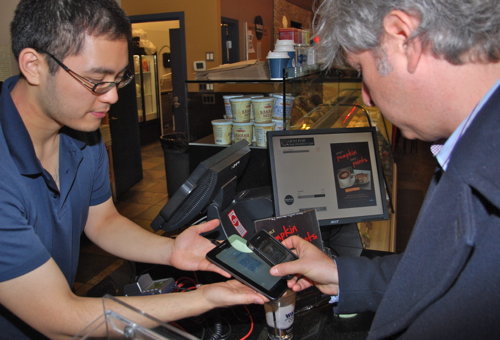 Customer David Lowy buys a coffee with bitcoin at a coffee shop in Vancouver, Canada, where the world’s first bitcoin ATM was installed in  2013. © Deborah Jones 2013

Most people are bamboozled by Bitcoin. It’s shrouded in jargon and geek speak. It borrows physical metaphors from all over the place adding to the confusion. It talks of “coins”, but there are no physical coins. You’ll hear about “miners”, although there is no physical digging or drilling. You’ll also hear made-up words such as “blockchain”. People shake their heads in confusion. The Bitcoin community itself doesn’t even know for sure who invented Bitcoin – I even met one of those who claims to be the big founder.

But there are definitions of Bitcoin that even a five-year-old could understand. Bitcoin is an online form of money – each one is currently worth around £290. So, when you read “cryptocurrency”, think digital gold. Think virtual money.

You can buy and sell bitcoins or exchange them for goods and services in the physical world, and a small but growing number of businesses you’ve heard of accept them. What takes place is a wholly digital trade – no physical coins or notes exchange hands. If you want to cash out into physical paper money, you’ll probably have to pay a fee.

When you send a dollar elsewhere online it is usually a bank that verifies the transaction – and takes a fee for its trouble. Your money is usually in the hands of age-old institutions, many of whom we now mistrust due to decades of corruption and profiteering.

But bitcoins can be bought and sold without the need for those organisations. It does this by distributing what used to be our trust in one organisation across a system of many people. Trust is shared out. And here another metaphor borrowed from the physical world comes into play. We ensure that our digital transactions are true and secure by writing them onto a shared, public “ledger”. It’s a big, open, digital book of truth and openness.

This ledger is secure and transparent. It isn’t owned by one corporation – it’s shared and kept up to date by the Bitcoin community. And no one charges you for recording your transactions into that ledger. Instead, those who verify the truthfulness and reliability of those transactions are the bitcoin miners. They all compete to verify the bitcoin transactions we all make, and those who succeed, are rewarded with bitcoins. In a way, it’s a game. A clever competition, with high stakes. And the winners not only win bitcoins but also help the whole thing to keep working reliably.

A bit like gold, not all bitcoins have yet been discovered. You can buy and sell the ones that are “out there”. On average their value has been rising over the years. The ones yet to be discovered are prospected for by “mining”.

When Bitcoin was founded, a finite limit on the number of bitcoins was set, just as there is a finite amount of gold in the physical world. The number was 21m. So far, more than 12m are in circulation. That means that a little fewer than 9m bitcoins are waiting to be discovered. So there are people buying and selling already existing bitcoins. There are people buying and selling goods and services with bitcoins – some of whom exchange them for stuff and money back in the physical world. And then there are people trying to find those increasingly elusive golden tickets – they are mining the undiscovered bitcoins.

How do you mine bitcoins?

Anthony Volastro offers a clearer description than most: “‘Mining’ is lingo for the discovery of new bitcoins – just like finding gold. In reality, it’s simply the verification of bitcoin transactions.” And how is that done? “It’s not just one transaction individuals are trying to verify; it’s many. All the transactions are gathered into boxes with a virtual padlock on them – called ‘block chains’ … Miners run software to find the key that will open that padlock.” And when they achieve that, new bitcoins are released as a reward.

They are tending the bitcoin garden, playing a kind of functional game – keeping the ledger true and the transactions verified. And it has all been set up so that, by doing that, you can find the unreleased bitcoins and dig them up.

In the early days, it was easier to be a miner. There were fewer miners around. As the bitcoin universe has expanded, however, more people are after the finite digital gold, just as in real gold prospecting. People have banded together, created “pools”, sharing ever more expensive hardware, processing capability and even electricity costs that go with finding those precious bitcoin golden nuggets. You see, it isn’t easy to find a bitcoin. The easier days are over. The view on the street now is that “only the biggest centralized miners will profit.”

So is it worth becoming a miner?

To answer that question, it’s worth hearing from the practitioners – the digital diggers and drillers. “It took ages for me to mine bitcoins because of enormous competent people mining with excellent machines,” said one.

Mining has become more competitive and tougher. On discussion boards the advice is not to even attempt it solo. You’ll have to join a “pool” – a group mining together, with some pretty impressive computer kit. (Most are all-night coders in China). You’ll need access to some hardcore hardware and be ready to burn 24/7 electricity.

Some now claim that the hold just a few groups have now over the mining operation is a significant barrier to entry for anyone else, especially a rookie. There’s no going it alone. You’ll have to join a “mining pool” and you might just feel like you’ve ended up in another institution. Ironic, eh?

There are alternatives to Bitcoin, such as Litecoin or Quarkcoin. Yet these alternative forms of digital money are becoming increasingly competitive as well. And as they evolve and become more competitively turbulent, the rewards diminish as well.. If you are just starting out as a potential miner, you stand a better chance going for one of these newer alternatives.

So, unless you are ready to dive in with some serious hardware, investment of time and even real money, bitcoin mining is probably not for the little guy any more, if it ever truly was. Bitcoin is institutionalising around centralised groups and may well be becoming similar to the organisations the whole thing was set up to replace.

Paul Levy is a Senior Researcher in Innovation Management, University of Brighton. This article was originally published on The Conversation. Read the original article.

You might also wish to read this story in F&O’s archive: