On October 17, 2013, the American government could enter unchartered territory. If Congressional Democrats and Republicans cannot agree on raising the statutory borrowing limit known as the “debt ceiling,” the government could be forced to default on its financial obligations. What would that mean for the rest of the world? Nobody knows for certain. Such a crisis scenario is virtually without precedent in modern North America. Some analysts say a default could trigger a global financial heart attack similar to the one caused by the  2008 collapse of Lehman Brothers, a sprawling global bank. Others claim a default wouldn’t be that bad, because America always has enough tax money coming in to pay its debt service.

We do know from history that a government’s failure to meet its debt obligations can have ramifications well beyond the borders of the realm where the default takes place. At the very least, it means the defaulting jurisdiction is locked out of international financial markets. Argentina was shunned by capital markets for a decade after defaulting on $81.8 billon (U.S.) of sovereign debt in 2001. The western Canadian province of Alberta was an outlier for nine years after admitting its inability to redeem $3.2 million (Cdn) of maturing provincial bonds in 1936. 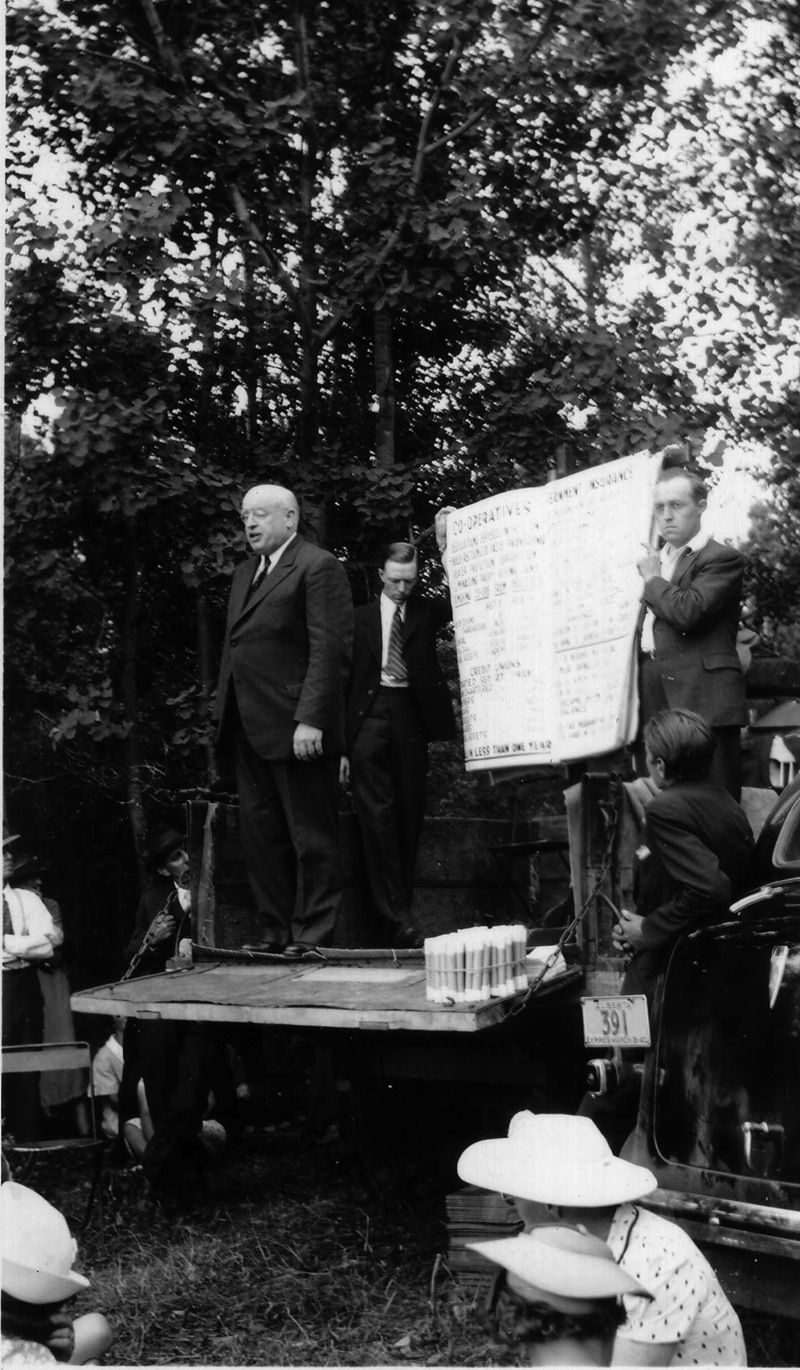 William (Bible Bill) Aberhart speaks at a rally before being elected as premier. Ernest Manning stands behind him, head lowered. (Photo courtesy of Brian Brennan)

Alberta, then with a population of 773,000, was the first, and to date only, Canadian jurisdiction to default on a maturing debt obligation. The ruling Social Credit provincial government had been swept into power in 1935 with a mandate to solve the economic problems of the Depression. However, the government didn’t realize until after it took office just how serious those problems were. The premier of the day, William Aberhart, put it in blunt terms when he stood up in the provincial legislature to announce the default. “We have no other alternative,” he said. “The government is broke.” Decades of financial mismanagement, excessively ambitious capital expansion projects, and rising demands for unemployment relief and other forms of public assistance following the onset of the Depression had left the province with an accumulated debt burden of $160 million (Cdn). Aberhart didn’t want to ask the federal government for help, because that would have meant surrendering autonomy, effectively forfeiting Alberta’s provincial status. Nor did he want to deal with Canada’s Toronto-based financial institutions, which could have bailed Alberta out, because he didn’t trust the chartered banking system.

As a first step toward pulling Alberta out of its financial quagmire, Aberhart announced in late 1936 that, when the province was eventually back in the black, the interest payable on provincial government bonds would be cut in half. This, needless to say, caused great consternation among the bondholders. But Aberhart stood firm. His successor as premier, Ernest Manning, would say in later years that it was simply a matter of priorities: “If it came to a choice between feeding people who were unemployed and paying 8 per cent versus 4 per cent, our choice was to pay 4 per cent on the bonds. Obviously, this antagonized every holder of an Alberta bond, and there were a lot of them.”

If the bondholders had just been Alberta residents, the damage caused by the default might have been largely confined to that province. But many of the bondholders were British and American, and they wondered initially if Alberta’s problems might extend to all Canadian bond issues. They had purchased the Alberta bonds with the mistaken understanding they were a Canadian federal obligation, not a provincial responsibility, and therefore safe. Now they began to worry about the stability of other Canadian securities in their portfolios. To quell their fears, the governor of the recently established Bank of Canada, Graham Towers, moved quickly to assure bondholders in London and New York that Canada was still a safe place for them to invest. Alberta was an aberration, he said, because under Social Credit rule the province had become “one of the strongholds of monetary cranks.” This referred to the fact that the province’s principal financial advisor was an amateur economist from Stockport, Cheshire, Clifford Douglas, who had found little political support in Britain for his unorthodox monetary reform theories but was lionized in Alberta for what one commentator described as a mixture of “pre-Keynesian economics, social resentment, and untutored hope.” One of Douglas’s untested theories was predicated on his belief that an inefficient bank-controlled economy left people without enough purchasing power to avail of the goods and services produced by the free-enterprise system. It was the job of governments, therefore, to step in, smash the chartered banking system’s monopoly on credit creation, and distribute discount coupons and dividends – which he called “social credit” – to increase consumer purchasing power.

After Alberta defaulted in 1936, there was some concern the same might happen in the neighbouring western provinces of Saskatchewan and Manitoba, which were also carrying heavy debt loads. Bank of Canada Governor Towers outlined the potential ramifications in a memorandum to the federal government: “United States investors in Canadian western bonds constitute a very influential group. If a general western default makes them form an adverse opinion on Canadian securities as a whole, the situation would be extremely serious and damaging for the Dominion (of Canada).”

To avoid further defaults, the federal government pumped millions of dollars into the Saskatchewan and Manitoba economies for unemployment relief and the maintenance of interest payments on outstanding debt. The government also gave some money to Alberta, but gave it sparingly. “They didn’t want to deal with us because of the whole attitude toward the Social Credit government,” said Ernest Manning, who succeeded Aberhart as premier in 1943. “That forced us into a pay-as-you-go position until we could refinance our entire debt at lower rates of interest.”

In 1945, Manning moved resolutely to reach a settlement with the bondholders. Over the previous nine years, the province had racked up a total debt of $34 million in defaulted bond payments plus an accumulated $25 million liability for unpaid interest on those bonds. Combined with other obligations, the entire public debt now stood at $219 million – up from $160 million in 1936.

Manning knew that settling with the bondholders wouldn’t be easy. His predecessor, Aberhart, had made numerous attempts to settle during the 1930s, but the attempts always foundered because the bondholders refused to exchange their defaulted and unmatured bonds for new government securities paying much lower rates of interest. This time, Manning ramped up the pressure saying it was either lower rates or nothing. His government would no longer play the debt reduction game by the bondholders’ rules of the 1930s.

Alberta’s ultimatum to investors was, “take-it-or-leave it.” They took it, but it took a long time for Alberta to regain trust, and re-enter the investment community with its credit rating restored.

After a series of meetings with a committee of institutional investors, Manning made what amounted to a final take-it-or-leave-it offer and threatened to put it into legislation with a deadline for acceptance if the bondholders tried to ignore it. Instead of paying off the old securities at the originally agreed interest of 8 per cent, the government would issue new 30-year bonds at the going rate of 3.5 per cent and give bondholders a cash bonus for co-operating. For the bondholders, this amounted to a Hobson’s choice. They could either accept what they saw as a minuscule rate of return on their investment or get no return at all. But Manning’s ultimatum brought them to the negotiating table, and eventually they accepted the deal. The next step for Manning’s government was to prepare a prospectus that would be accepted by the U. S. Securities Exchange Commission, and to strike agreements with the Wood Gundy investment house in Toronto and First Boston Corporation in New York City to underwrite the new bond issue of $219 million. When these were completed, Alberta re-entered the North American investment community with its credit rating restored.

Alberta never faced another default after that. Once oil and gas replaced agriculture as the principal driver of the provincial economy, it was only a matter of time before the debt accumulated during the Depression years became a forgotten chapter in Alberta history.

There’s little correlation, of course, between what happened in Alberta in 1936 and what might happen in Washington on October 17th. Alberta defaulted because the province didn’t have the money to pay its bills and didn’t want to be beholden either to bankers or to the federal government to stay afloat. If America defaults, it will be because two political parties couldn’t bridge their ideological differences.

But one thing is clear from the Alberta default, and from other defaults that have occurred around the world during the past 200 years: Whenever a jurisdiction loses its credit standing in the world’s capital markets, it takes a very long time to regain that trust.

Facts and Opinions feature writer Brian Brennan is the author of The Good Steward: The Ernest C. Manning Story 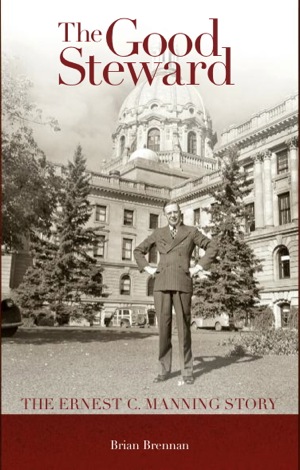 The Good Steward, by Brian Brennan