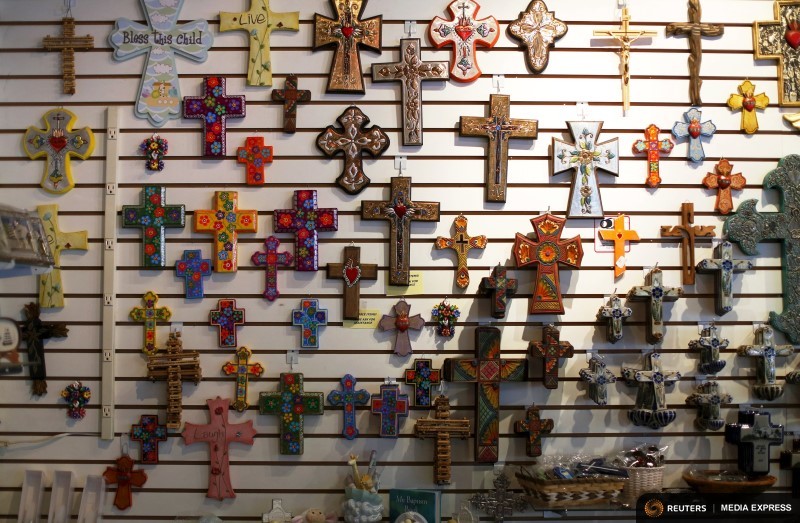 Decorative crucifixes are displayed at the gift shop at Mission San Diego de Alcala in San Diego, California, September 14, 2015. Pope Francis will declare Friar Junipero Serra a saint at a Mass celebrated at the National Shrine in Washington on September 23 during the pontiff’s first visit to the United States. The Franciscan friar from Spain built a series of missions along the Pacific coast in the 18th century, in what is now California, to spread the faith among Native Americans. His advocates say he supported the Indians, introducing cattle and crops to their land. The Vatican has defended Serra against accusations that, as part of the Spanish colonial system, he suppressed Native Americans. Serraâ’s resting place is inside the Basilica at the Carmel Mission south of San Francisco. REUTERS/Mike Blake

Was he a saint or a sinner, an evangelizer or an enslaver?

During his visit to Washington, Pope Francis will preside over one of the most controversial acts of his papacy. He will confer sainthood on the 18th century Spanish missionary Friar Junipero Serra, and in doing so, dive into a cultural battle in the United States.

Serra founded nine of the 21 missions in California that later were the basis of what is now the modern state. He is a household name in California, where streets and buildings bear his name and children study his legacy in schools.

Critics say that legacy has more darkness than light, that his halo is stained with blood.

Many Native Americans were appalled when the pope announced the canonization in January, calling Serra a great evangelizer. The late Pope John Paul beatified Serra in 1988 and Francis waived Church rules that normally require a second miracle between beatification and sainthood.

Detractors say Serra, who arrived from Mexico in what is now San Diego in 1769, beat and imprisoned Native Americans in the closed communities known as missions. They say he suppressed their cultures and facilitated the spread of diseases that heavily reduced the population.

But last May, the pope praised Serra’s missionary zeal and said he had “defended the indigenous peoples against abuses by the colonizers”.

“He was one of the founding fathers of the United States, a saintly example of the Church’s universality and special patron of the Hispanic people of the country,” the Argentine-born pope said.

Corine Fairbanks, director of the Southern California chapter of the American Indian Movement, opposes the canonization, which takes place on September 23, the day after the pope arrives in the United States from Cuba.

“The pope stating that this person is someone saintly, or someone to be looked up to, or even revered or prayed to is giving the international message that what happened (to indigenous people), was by divine right,” Fairbanks told Reuters Television.

“Thousands, hundreds of thousands of people were killed all in the name of Catholicism and progress, so to speak.” Corine Fairbanks

Vatican sources said Francis may make another apology during the canonisation ceremony outside a Washington church, where some Native Americans say they hope to be able to protest.

Supporters say Serra loved the “Mission Indians”, as they are known, and believed that spreading the gospel to them and ensuring their salvation, was part of that love, even if it meant barring them from leaving the missions.

Olin Tezcatlipoca, director of the Mexia Movement, which promotes indigenous rights, said such assertions appall him.

Much of the Church’s defence of Serra revolves around the explanation that “he was a man of his times” in a much broader historical context.

Father Vincenzo Criscuolo, a Franciscan at the Vatican department for the causes of saints, said that corporal punishment was commonly used as an educational tool at the time, particularly by Spaniards, but rejected accusations from some Native Americans that in Serra’s case it amounted to genocide.

“It (corporal punishment) can’t be excluded but it certainly was not genocide,” he said.

Guzman Carriquiry, a member of the Vatican’s commission for Latin America and a personal friend of the pope, criticised proposals that a statue of Serra be removed from the National Statuary Hall of the U.S. Capitol building in Washington.

“They want to remove the only Hispanic there, exactly when the first Hispanic pope in history will canonise him. That would not be an extraordinary welcome in a land that puts itself forward as an example of multi-cultural tolerance,” he said.

Monsignor J. Michael McKiernan, rector of Mission Basilica in San Juan Capistrano, California, acknowledged that Serra had “human flaws and difficulties and struggles” but that overall his legacy was a positive one.

“It’s not all happiness and grace,” he told Reuters Television. “There were some difficult times as well.”

“So some of the things that some of our brothers and sisters and Native Americans are concerned about, are very real and we don’t want to deny those, but also recognising that his legacy also brought beautiful things as we celebrate here every single day.”