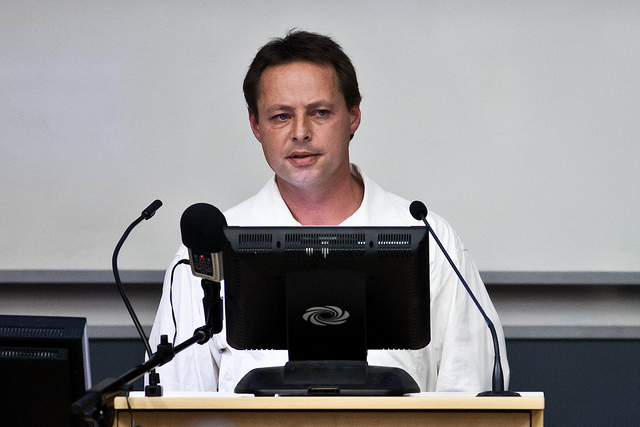 SYDNEY — The United States has acknowledged that the conviction of an Australian man held for nearly six years in Guantanamo Bay was not legally valid.

The Australian, David Hicks, was one of the first people sent to Guantanamo, and he has already figured in a key U.S. court decision that expanded the rights of detainees held in the offshore prison. Initially charged with multiple crimes, including conspiracy to commit acts of terrorism, attempted murder, and aiding the enemy, Hicks ultimately pleaded guilty to a single charge of providing “material support” to terrorism.

Hicks recently appealed, arguing that the law used against him was passed after 9/11 and could not be applied retroactively. In its reply, the U.S. argued that the review court should refuse to review the case because Hicks had entered a guilty plea.  But in a crucial concession, the military commission’s chief prosecutor said that if the appeal were allowed, “the Court should not confirm Hicks’s material-support conviction.”

The Jan. 16 brief by Brig. Gen. Mark S. Martins was obtained by ProPublica and has not yet been made public.

“Hicks will finally get justice,” said Michael Mori, a Marine Corps major who was Hicks’ military lawyer. Mori is now out of the military and is no longer involved in the case, but he said he has seen a copy of the prosecutor’s brief, as did two lawyers currently representing Hicks.

Hicks would not have been convicted in the first place “if the case had been tried in federal court, instead of the politically motivated military commissions,” said Mori, author of a book about the case, “In the Company of Cowards: Bush, Howard and Injustice at Guantanamo,” which was published last September.

The latest development is a striking retreat for the American government. The Bush administration initially described Hicks as among the “worst of the worst,” the label used for the men held in Guantanamo. And in 2007, when Hicks was still in Guantanamo, the American ambassador in Australia, Robert D. McCallum Jr., described the Guantanamo detainees as “ruthless fanatics who would kill Australians and Americans without blinking an eye.”

Hicks’ case stands out in any discussion about the use of the military commissions in the war on terror. He was a Westerner, Detainee 002 (001 was another Westerner, John Walker Lindh, from San Francisco. Lindh pleaded guilty in federal court to two-terrorism-related charges in 2002 and was sentenced to 20 years in prison) and he was on the first plane bringing prisoners to Guantanamo.

Later, Hicks was a plaintiff in the lawsuit that resulted in the Supreme Court ruling that Guantanamo detainees had the right to file habeas petitions in civilian courts to challenge their detention.  And he was the first person convicted and sentenced by the military commission.

Many legal analysts have questioned whether the military process begun by the Bush administration can ever arrive at the truth.  How can a judge assess a statement extracted by torture? How reliable are the allegations in the government’s indictments when prosecutors overcharged, as they did in Hicks’ case? If the Bush administration had allowed suspects to be tried in federal courts, the government’s charges and the suspects’ claims of innocence could have been put to rigorous test.

In the case of David Hicks, opinions remain divided over whether he was a lost soul in search of adventure and meaning in his life or a committed Taliban supporter, who, with his Caucasian skin and Australian passport, was being groomed by al-Qaida to carry out terrorist attacks in the West.

A heavy drinker and drug user, Hicks was expelled from school at 14. He was only 5-feet-5-inches tall, but he played Australian Rules football, which is physically more demanding than rugby, and became a kangaroo skinner in Australia’s Outback; he then went to Japan to train horses. Tired of that, he ventured to the Balkans where he joined the Kosovo Liberation Army, which at the time was fighting with NATO support against Slobodan Milosevic, Serbia’s leader.  When that war ended, he returned to Australia, and after trying unsuccessfully to join the Australian army, he went to Pakistan, hoping to ride the Silk Trail on horseback, he told his parents.

There, he found Lashkar-e-Taiba, a Pakistani-supported organization battling India in the disputed territory of Kashmir. Lashkar-e-Taiba eventually ended up on the U.S. list of terrorist organizations and executed the 2008 attack on Mumbai that killed 166 people, including six Americans. But at the time, the group was officially viewed as a collection of regional insurgents.

Lashkar sent Hicks to Afghanistan for training. American and Australian officials have said that he attended at least four al-Qaida camps. In the most exhaustive journalistic examination of the Hicks case, “Detainee 002: The Case of David Hicks,” Australian journalist Leigh Sales wrote that Hicks “did a seven week training course, including marksmanship, small team tactics, ambush, camouflage and intelligence gathering,” and that he claimed to have met bin Laden twenty times, which was probably a boast, which he later regretted. A military prosecutor described Hicks, to Sales, as a “ne’er-do-well,” “big talker,” and a “kooky maverick,” without the courage or intellect to carry out a major operation.

In his own memoir, “Guantanamo: My Journey,” Mr. Hicks glosses over his time in Afghanistan. Sally Neighbour, an Australian journalist who has written extensively on Islam and terrorism post 9/11, asserted in her review of the book that Hicks had been less than forthcoming. She noted that he devoted only one page in the 456-page book to his al-Qaida training.

“None of this is to suggest that David Hicks deserved the ‘six years of hell’ he describes,” Neighbour wrote. “He did not, which is why so many Australians campaigned for his release. At the least, Hicks owed them a frank, open and truthful account of his whole story, rather than this distorted air-brushed version of the truth.”

Hicks’ ordeal began when he was captured in late 2001 by the Northern Alliance, the anti-Taliban group.  The Afghans turned Hicks over to the American military for a ransom of $5,000, according to his father. After being interrogated aboard the U.S.S. Peleliu, he was flown to Guantanamo, where he cooperated with interrogators.

The Australian government was content to let him stay there because whatever he was doing in Afghanistan, he had not violated any Australian laws, so he would have to be released if he were sent home.

When Hicks was first captured, Australian tabloids labeled him “Australia’s own Taliban.” But public opinion turned here, and support for David Hicks became the symbol, for conservatives and liberals, to express their opposition to the manner in which America was conducting the war on terror 2014 Guantanamo, secret prisons, torture and the lack of due process under the military commissions.

Prime Minister John Howard, the leader of the country’s center-right Liberal Party, and who coincidentally had been feted at a gala party at the Australian embassy in Washington two days before 9/11, was facing a tough re-election and appealed to President Bush and Vice President Cheney to bring Hicks to trial. The charges against Hicks were then reduced to the one count of material support for terrorism, and he pleaded guilty.

He was returned to Australia, served seven months in jail and then was released after a total of nearly six years behind bars. He has since married, lives in Sydney and works at odd jobs. He is currently on a job outside Sydney, beyond reliable cellphone service and thus not available for an interview, his Australian lawyer, Stephen Kenny, said in a telephone interview from his office in Adelaide. “We’re very please to see that they agree he is innocent, and the conviction cannot stand,” Mr. Kenny said.

In November 2013, lawyers at the Center for Constitutional Rights, in New York, and Joseph Margulies, a law professor who has represented several Guantanamo detainees in landmark cases, filed an appeal in Hicks’ case. They argued that Hicks’ guilty plea and conviction were not legally valid because material support for terrorism was not a crime under American law at the time Hicks was in Afghanistan, nor was it a war crime under international law.

Last July, the Court of Appeals for the District of Columbia vacated the material support conviction of another Guantanamo detainee, Ali al-Bahlul. In light of that decision, United States v Bahlul, in November, the military review court hearing Hicks’ appeal asked the government and Hicks’ lawyers to specifically address the question of whether Hicks’ conviction should be affirmed.

In the seven-page brief responding to that question, the commission’s chief prosecutor argues first that the court should not hear Hicks’ appeal because he had pleaded guilty. Hicks’ lawyers argue the plea was coerced by the torture and brutal conditions under which Hicks was held at Guantanamo. They said his plea was irrelevant in any event because courts cannot accept a guilty plea to conduct that was not a crime at the time it occurred.

In his brief, the chief prosecutor acknowledges that if the court believes it has jurisdiction, it “should decline to affirm Hicks’s material-support conviction” in light of the appeals court ruling on Bahlul.

Hicks, 39, has maintained a low profile since his release. But at a human rights ceremony in Sydney last month, he heckled the country’s attorney general, George Brandis.

“Hey, my name is David Hicks,” he shouted as Brandis was speaking, the Guardian-Australia reported. “I was tortured for 5 1/2 years in Guantanamo Bay in the full knowledge of your party! What do you have to say?”

CIA psychologists failed both scientific rigour and morality, by Laurence Alison, The Conversation

ProPublica’s coverage of Guantanamo Bay. (You will leave Facts and Opinions’ site) ProPublica is a Pulitzer Prize-winning investigative newsroom. Sign up here for their newsletter.

Help sustain our independent, non-partisan and professional journalism by buying a $1 day pass or subscription to Facts and Opinions. A boutique of select, first-rate reporting and analysis, without borders, F&O is employee-owned, does not carry advertising, and is funded entirely by readers. Click here to purchase a $1 day pass or subscription, from $2.95 per month to $19.95 annually.