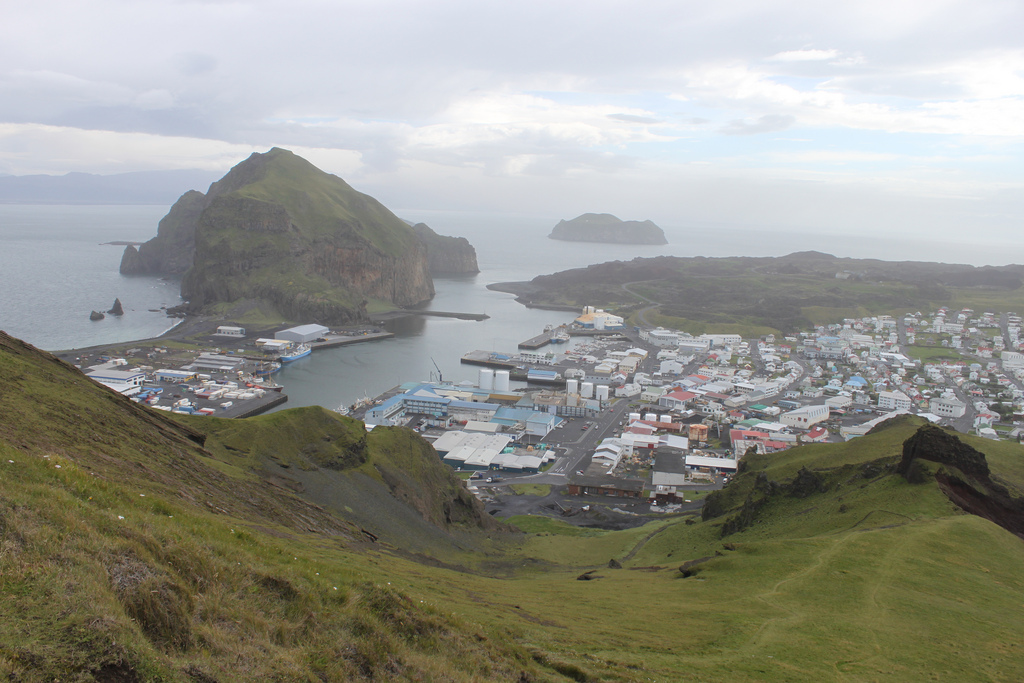 Heimay, Iceland, was nearly destroyed by a volcanic explosion above it, more than four decades ago. Residents not only prevailed, but benefitted from the devastation, writes Johanna Hoffman. Photo by kitniederer via Flickr, Creative Commons

HEIMAY, Iceland – The grassy slopes above this small Icelandic fishing town exploded with lava and ash 41 years ago. Rolling meadows erupted into a raw volcano and columns of 2,000º molten rock burst from the Earth. The surprise five-month eruption nearly destroyed the town.

Yet residents found ways to not only return but benefit from the devastation.

That Heimay’s townspeople bounced back with speed and agility is no accident. For Icelanders, long tested by fire and ice, resiliency to environmental change is par for the course.

As climate change threatens us all with stress and surprise, we would do well to learn from their ways. Design and planning can help us cope with – and even embrace – uncertainty and instability in our cities. Like the people of Heimaey, we can learn to take shelter in shifting ground.

Change, for Icelanders, is a fact of life. Earthquakes happen regularly. Volcanic eruptions come and are accommodated when they do. Asked about the 1973 explosion, a Heimaey barista shrugged: “It was stressful, but we managed.” Such is life on the Mid-Atlantic Ridge.

Across the rest of the developed world, natural hazards spark the opposite reaction. Ever since industrialization gave us the tools for large-scale engineering, we’ve set about armoring landscapes and minimizing environmental change. Manhattan’s marshes were filled and shored up to foster international trade. The Netherlands, reeling from devastating flooding of the Rhine in 1953, launched the Deltaworks project, one of the most extensive systems of dikes and dams in the world.

This reliance on hard engineering to keep natural forces at bay has left us vulnerable. Sandy overwhelmed Manhattan’s shoreline fill, crippling the region. Hurricane Katrina almost wiped a major American city off the map. The mighty dams and levees of the Mississippi couldn’t hold back 2011’s crushing spring floods, resulting in $3.4 billion in direct damages.

On Jan. 23, 1973, the island of Heimaey ripped open. As tremors in the Earth let loose spews of molten lava, farmers shot their cattle, fishermen abandoned their boats in the harbor and nearly all 5,300 residents fled to the mainland. For months, fire rained across the island, houses burned and ash fell twenty feet deep. By the time things fell quiet five months later, Eldfell loomed 600 feet high, a raw volcano where before there was only grass.

As lava began to pour across the island, Icelanders realized the major center of their country’s fishing industry – Heimaey’s harbor – was about to be blocked from the sea. Fishing is so central to Iceland that the country puts a different fish, crustacean or dolphin on each coin. John McPhee, writing in Control of Nature, put the dilemma in perspective: Proportionally Heimaey was more valuable to Iceland than Manhattan was to Americans.

Controversial tactics got the go-ahead. Physicist Thorbjorn Sigurgeirsson proposed spraying the lava’s face with seawater to cool and redirect the flow. Crews set to work with fire hoses, a dredging boat, and finally industrial pumps. The $1.5 million intervention worked: The lava flows were slowed, then diverted. Residents who returned came home an island 20 percent larger, with a more protected harbor.

The lesson here is that resilience can be cultivated. Heimaey’s resilience to Eldfell’s explosive force stemmed from two key factors.

One, residents had a strong understanding of their island’s landscape dynamics. Understanding the natural forces that shape our landscapes helps prepare us both practically and psychologically for how those landscapes can change.

Two, Icelandic culture is shaped by robust social ties and strong governing institutions. We can cooperate better and act quicker if we foster strong connections with people – from neighbors to government officials – who share our landscapes.

Both factors are key in developing resiliency to intense environmental change.

The 1995 Chicago heat wave offers a vivid – and tragic – example of the importance of social ties. More than 700 people died, many elderly, as polluted urban air trapped the sweltering heat. Sociologist Eric Klinenberg examined the impact of the event on two adjacent neighborhoods, and found striking differences.

One neighborhood was poor and largely elderly but dotted with small commercial establishments that encouraged residents to socialize. The death toll there was three out of every 100,000 people.

The other neighborhood, also poor and elderly, lacked commercial business and had less social action on the street. Its death toll was more than 10 times higher – 33 out of every 100,000 people.

Regular social interactions, it turns out, give residents a common understanding of who needs help and how to reach them. Those social ties, Klinenberg concludes, can go a long way in helping cities cope with the increasingly unpredictable events – from heat waves to hurricanes – stemming from climate change.

Just as important are a given group’s cultural mores. Christine Wamsler, author of Cities, Disaster Risk and Adaptation and associate professor at Sweden’s Lund University, finds that longstanding capacity for adaptation often results from how connected a given culture is to its landscape.

In Japan, for instance, negotiating a tsunami is a significant part of national culture. Folktales, paintings and photographs all repeatedly depict the act of retreating to high ground when tsunami comes. When coastal waters start to surge, citizens know what to do.

This is where planning and design can help. When well done, they are powerful tools to cultivate better understanding of our landscapes and the people with whom we share them.

New Yorkers may not be well aware of the risks that come with living on the Hudson Estuary these days, but they soon will be, thanks to bigger storm surges and extreme tides. Smart design moves now could save considerable heartbreak and cash, as well as get residents accustomed to dealing with environmental change.

Some of that change is already underway. Since Sandy revealed the region’s vulnerability to flooding and inundation, new waterfront projects are replacing the old seawall paradigm with tidal inlets and urban beaches to connect residents with river dynamics.

On the opposite American coast, San Francisco also risks inundation from sea level rise. Designs for its shoreline could include water plazas and floating piers that would allow users to better understand the intensity of tides and the harshness of winter storms. In Las Vegas, massive light shows could be re-wired as public art installations to communicate water usage levels in the increasingly water-poor city.

Planning and design can also play fundamental roles in strengthening our social networks.

Long before Eldfell exploded, Heimaey’s harsh winters and violent storms had taught residents how to cooperate and rebuild. Those strong social ties likewise extended to Heimaey’s relationship with the Icelandic government, whose swift actions were key in saving the town and its harbor. We can cultivate those ties by pushing for development that fosters connections between residents and nurtures economic development.

Designing housing within walking distance from stores creates opportunities to strengthen relationships between neighbors. Promoting public transportation sets the stage not just for more chance encounters, but for the sense of shared experience.

Given the uncertainties climate change is throwing our way, it’s time to learn from Heimaey’s example. We can’t stop the ground from shifting beneath us but we can learn to shift with it when it does.

Johanna Hoffman is a landscape architect, coastal adaptation strategist and writer on climate change and its impacts on the built environment. She lives in California’s San Francisco Bay area.  This essay was originally published by The Daily Climate, an independent news service in the United States covering energy, the environment and climate change.

Recommended reading on F&O:
Isn’t It Hysterical? The cliff is ahead. We have the tools to see it. By Chris Wood, F&O Natural Security columnist (paywall)
“Volcano Season” — is it real? By Robin Wylie
The Drowning of the ‘Amazon of North America.’ By Bob Marshall, Brian Jacobs and Al Shaw
Book Review: Mike Berners-Lee on Naomi Klein’s latest book, This Changes Everything
The Ugly Oil Sands Debate. By Tzeporah Berman
An Argument for Carbon Divestment. By Desmond Tutu