Condemnation of memory: the destruction of World Heritage

Recently in Aleppo, Syria, the Jabha Shamiya militia has started carrying out a new urban warfare strategy: tunnel bombing. Aside from the human damage wrought by this tactic, it is also extremely damaging to Aleppo’s Old City, a UNESCO World Heritage site.

In addition to the collateral destruction caused by warring religious and political sects, the destruction of World Heritage sites is often associated to the absolute iconoclasm of several Islamic fundamentalist groups. Recent examples include the demolition of the Bamyian’s Buddhas in Afghanistan and the destruction of Timbuktu’s Holy Shrines in Mali.

However, these are only the most visible examples of a broader threat to cultural heritage around the world. And Middle Eastern extremist groups are far from the only ones responsible; profitable looting, unchecked industrial and urban development, and collateral damages during conflicts – all have led to the destruction or disappearance of cultural heritage.

Cultural heritage can be either tangible (sculptures, monuments), or intangible (oral traditions, performing arts); movable (paintings, manuscripts), or not (archaeological sites). They can represent a number of things: it memorializes an important era in history, it can symbolize a nation’s power, or represent a profitable source of income. For these reasons, they’ve been the object of manipulation and destruction for millennia, whether it was the looting of the pharaohs’ tombs 2,500 years ago, or Scipio’s complete annihilation of Carthage in 146 BCE.

In November 1945, representatives from different nations gathered to ponder the causes of two consecutive global conflicts. The group, made up of politicians, scientists, philosophers, and artists, identified part of the problem as mankind’s “ignorance of each other’s ways and lives” – an inability to understand, appreciate and preserve different cultures.

At the end of the conference, thirty-seven countries created UNESCO (The United Nations Educational, Scientific and Cultural Organization) and signed its constitution; a year later, twenty countries ratified it. The institution was dedicated to the promotion of “intellectual and moral solidarity of mankind” through the advancement of cross-cultural knowledge, and the protection of cultural expression in its many forms. Through international collaboration, the organization soon went to work, preserving endangered cultural sites like the Abu Simbel temple in Egypt.

In November 1972, during UNESCO’s 17th session, the state parties adopted the “Convention concerning the Protection of the World Cultural and Natural Heritage,” and created the “World Heritage” designation, which they assigned to extraordinary cultural achievements, such as the Andean road system and the Great Wall of China, and natural landscapes, like Iguazu Falls and Turkey’s Göreme National Park.

The Convention mentioned that “The deterioration or disappearance of any item of the cultural or natural heritage constitutes a harmful impoverishment of the heritage of all the nations of the world.” It also emphasized the global ownership of this heritage, along with the responsibilities of future generations.

As of today, 779 cultural properties, along with 31 mixed sites (natural and cultural) are listed in 161 state parties throughout the world. For the past 70 years, a set of conventions, recommendations, and declarations, have contributed to the development and implementation of new regulations, which tackle issues such as illegal trafficking, protection of cultural heritage during conflicts, and defining what should be considered “intangible cultural heritage” (such as “male-child cleansing ceremony of the Lango of central northern Uganda,” or “Mongolian caligraphy”).

However, as of 2015, in addition to the non-listed cultural heritage features, 46 World Heritage sites and 38 cultural practices are considered endangered.

For instance, in Crimea and Ukraine, UNESCO Director-General Irina Bokova has raised concerns about the lack of measures in place to protect archaeological and cultural resources; the destruction of several historic churches and fortresses has already occurred. Meanwhile, in Yerevan, Armenia, corruption and misplaced nationalism has led to an almost complete eradication of the old city, which dates from the 18th and 19th centuries. In Bolivia, extensive mining activities is threatening the survival of the 500-year-old Potosí colonial settlement.

America hasn’t emerged unscathed. In New York City, much of its modern architectural heritage – like the American Folk Art Museum – is being neglected. It’s also estimated that up to 80% of the archaeological sites in the US have been looted and damaged.

Finally, rampant looting has taken place in Greece, Italy, Portugal, Spain, and large parts of Southeast Asia, due to an illegal antiquity trade market estimated to be worth upwards of a billion dollars per year. Some of these pirated artifacts will end up for sale online, on the auction block at Sotheby’s – even in national museums.

Why, despite international efforts such as the UNESCO, is cultural heritage still under attack worldwide?

Some have blamed nationalistic regimes, which often attempt to politicize cultural artifacts, using them to reinterpret the past for specific ideological purposes. Others have highlighted the striking contrast between the massive profit created by the illegal antiquity market and the relatively low penal risk tied to it. And some have also pointed to the lack of enforcement of UNESCO regulations; they’ve also suggested the creation of modern-day “Monument Men” – individuals tasked with safeguarding at-risk areas of cultural importance in countries at war.

But above all, there seems to be a disconnect among nations and individuals in how they comprehend the concept of world heritage, and its importance as a means to safeguard mankind’s memory.

When the UNESCO convention was signed, the world had just emerged from two global conflicts. While each nation had its own agenda, all the attending state parties sought to find common denominators: shared goals that would persevere beyond ideology, politics, power and economics. It’s an ambient universalism that’s particularly well represented in the Universal Declaration of Human Rights. 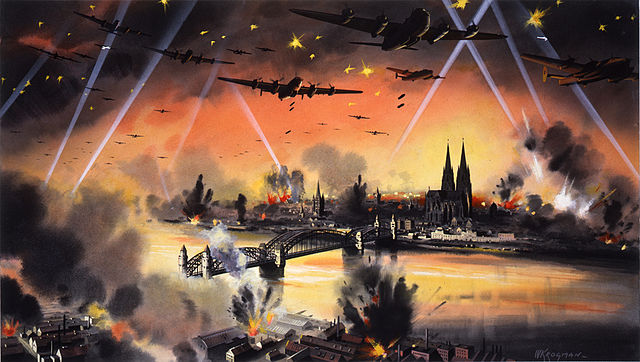 The creation of UNESCO was influenced by the destruction caused by two World Wars, in which entire cities – along with countless structures of cultural importance – were left in ruins. Above, British war art depiction of mass bomber raid on Cologne. The National Archives, UK. via Wikimedia Commons

The challenge of the UNESCO participants, then, was defining a set of universal values that would preserve and promote a culturally diverse world. To the assembled parties, the modification and re-interpretation of the past was one of the greatest threats to world peace. This was particularly conspicuous in the creation of the Ahnenerbe during Nazi Germany. This research institute, headed by Himmler, was charged with studying “Aryan culture” and finding evidence supporting Hitler’s imperialist and racial ideology.

UNESCO decided that the sum of all of mankind’s experience and achievements was to be safeguarded and shown as the heritage of all. It would serve as the ultimate common denominator. Some of the charter’s lessons are simple: the past belongs to no particular nation, no culture is a hermetic entity, and it is a fluid concept, always gaining new elements.

A relativist perspective on the concept of World Heritage would question the right of institutions to meddle in the affairs of individual countries. I would argue that the huge number of people risking their lives on a daily basis to preserve pieces of their cultural heritage is the strongest evidence of a universal devotion to safeguarding our shared memory.

In order to support this effort, increasing international collaboration between different institutions has occurred at the scientific, law enforcement and judicial levels. The ongoing efforts of UNESCO, the International Council on Monuments and Sits (ICOMOS), INTERPOL have led to positive results, such as the registration of art dealers and the closure of loopholes that allowed artifacts from looting to enter the legal antiquity market.

Of course, more needs to be done.

In Ancient Egypt, one of the worst punishments an individual could receive was the chiseling off of his or her name from all monuments and statues – the idea being that the person would be doomed to be forgotten for eternity. In Ancient Rome, this type of post-mortem sentence was named damnatio memoriae, the condemnation of memory.

It is the opposite – the preservation of mankind’s shared memory – that is at the core of World Heritage. As war continues to rage in places like Syria, the same countries that have pledged to preserve the world’s heritage should consider what’s also at stake – beyond politics, beyond economics – and recognize how much can be lost.

Bastien Varoutsikos is a Ph.D. candidate in Anthropology at Harvard University