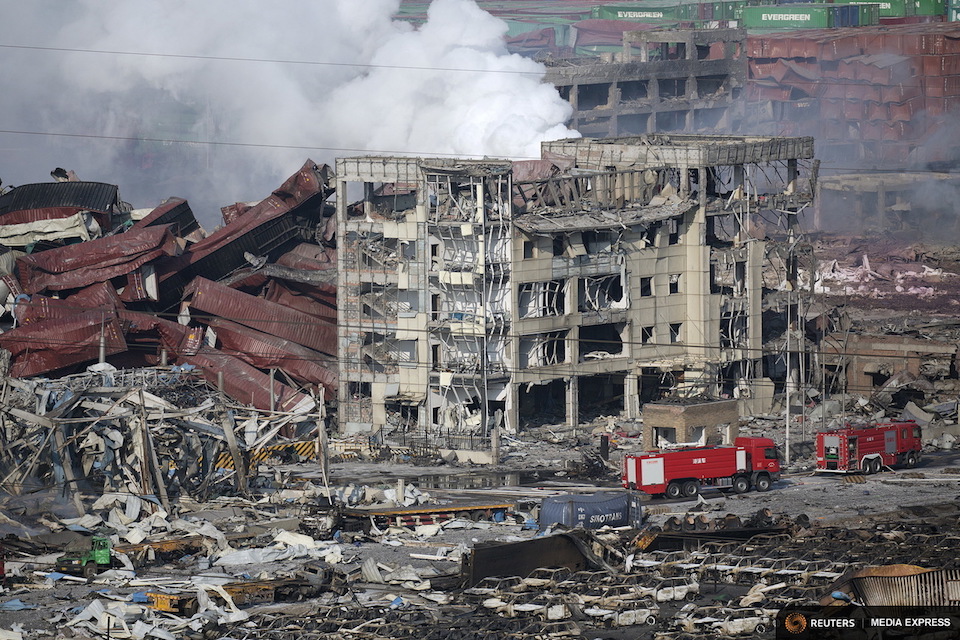 Fire engines are seen at the site of the explosions at the Binhai new district, Tianjin, August 13, 2015. REUTERS/Damir Sagolj

TIANJIN, China (Reuters) – Two huge explosions tore through an industrial area where toxic chemicals and gas were stored in the northeast Chinese port city of Tianjin, killing at least 50 people, including at least a dozen fire fighters, officials and state media said.

At least 700 people were injured, more than 71 seriously, the Tianjin government said on its Weibo microblog, and the official Xinhua news agency said two fires were still burning.

The blasts the night of August 12, so large that they were seen by satellites in space, sent shockwaves through apartment blocks kilometres away in the port city of 15 million people. Internet videos showed fireballs shooting into the sky and the U.S. Geological Survey registered the blasts as seismic events.

Vast areas of the port – the 10th largest in the world – were devastated, crumpled shipping containers were thrown around like match sticks, hundreds of new cars were torched and port buildings left as burnt-out shells, Reuters witnesses said.

“I was sleeping when our windows and doors suddenly shook as we heard explosions outside. I first thought it was an earthquake,” Guan Xiang, who lives 7 km (4 miles) away from the explosion site, told Reuters by telephone.

Guan, 24, said he saw flames and a mushroom cloud in the sky as he and other residents scrambled to get out of the building.

Tianjin authorities said 12 firefighters were among the 44 killed.

The cause of the blasts was being investigated but Xinhua said several containers caught fire beforehand. Industrial accidents are not uncommon in China following three decades of breakneck economic growth. A blast at an auto parts factory in eastern China killed 75 people a year ago when a room filled with metal dust exploded.

The state-run Beijing News earlier cited Tianjin fire authorities as saying they had lost contact with 36 firefighters. By late afternoon, Xinhua reported 18 were missing, while 66 were among the hundreds of people being treated in nearby hospitals.

Xinhua said 1,000 firefighters and more than 140 fire engines were struggling to contain a blaze in a warehouse that held “dangerous goods”.

“The volatility of the goods means the fire is especially unpredictable and dangerous to approach,” Xinhua said.

Several fire trucks had been destroyed and nearby firefighters wept as they worked to extinguish flames, the Beijing News reported.

President Xi Jinping demanded that authorities “make full effort to rescue and treat the injured and ensure the safety of people and their property”.

Xi said in a statement carried by official media that those responsible should be “severely handled”.

City officials had met recently with companies to discuss tightening safety standards on the handling of dangerous chemicals. The Tianjin Administration of Work Safety posted a notice about the meeting with companies at the port on its website a week ago.

Anxious residents rushed to hospitals to seek news about injured loved ones. Dozens of police guarded the entrance of the TEDA hospital, a Reuters witness said.

Pictures on Chinese media websites showed residents and workers, some bleeding, fleeing their homes. Xinhua said people had been hurt by broken glass and other flying debris. Authorities told reporters they expected the blasts to have forced 6,000 people from their homes by nightfall.

Grey clouds of smoke billowed above the blast site and several trucks carrying paramilitary police – wearing masks to protect them from potentially toxic smoke – headed to the area.

The blasts shattered windows in buildings and cars and knocked down walls in a 2-km radius around the site. Photographs on news websites showed burned-out cars inside a multi-storey car park at a logistics base at the port.

Video posted on YouTube from what appeared to be an apartment building some distance from the scene showed an initial blast followed by a second, much bigger, explosion. Shockwaves hit the building seconds later.

“Our building is shaking. Is this an atomic bomb?” said a frenzied voice inside.

Despite the devastation, the port was operating normally, a port official said. Tianjin port is the gateway to northern China’s industrial belt.

Xinhua said the explosions, the first equivalent to 3 tonnes of TNT and the second to 21 tonnes of TNT, ripped through a warehouse.

It identified the owner of the warehouse as Tianjin Dongjiang Port Ruihai International Logistics. The company’s website said it was a government-approved firm specialising in handling “dangerous goods”. Company officials could not immediately be reached for comment.

According to an assessment by government environmental inspectors published in 2014, the facility was designed to store several dangerous and toxic chemicals including butanone, an explosive industrial solvent, sodium cyanide and compressed natural gas.

CCTV said at least one person at a “relevant company” had been detained.

Among the injured were some employees of John Deere & Co <DE.N>, the U.S. farm and construction equipment maker based in Moline, Illinois. Company spokesman Ken Golden said several employees who were at home at the time of the blasts sustained serious injuries and that some are in critical condition.

In addition, a small group of Deere employees working at the company’s facilities sustained minor injuries from blown-out windows, Golden said in a written statement.

Watch a video of the explosion. (Warning: language may be offensive.)