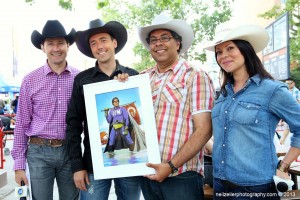 Naheed Nenshi, mayor of Calgary, Alberta, was awarded  first place Tuesday in the 2014 World Mayor Prize, by the City Mayor Foundation, an international think tank. Said the World Mayor organization in its announcement:

Calgary Mayor Naheed Nenshi, the winner of the 2014 World Mayor Prize, is the most admired mayor of any large Canadian city. His vision how a city should plan for its future has attracted the attention of urban thinkers from across North America. Since taking office in 2010, he has become the most admired mayor of any large Canadian city. He is an urban visionary who doesn’t neglect the nitty-gritty of local government. For many in North America and indeed Europe, Mayor Nenshi is a role model for decisive management, inclusivity and forward planning. He has also demonstrated strong leadership during disasters like the Alberta floods of 2013 and last year’s power outage, which affected large parts of the downtown area of the city. While Mayor Nenshi rejects being labelled progressive or indeed anything else – in the World Mayor interview he said: “I really believe that this kind of categorization alienates people and keeps them from participating in the political process.” – he has not shied away from challenging conservative views from some members of Alberta’s provincial government.

In 2010 Naheed Nenshi became the first Muslim mayor of a major North American city after his ‘Purple Revolution’ captured the imagination of voters from right across the political spectrum. Some six weeks before the 18 October 2010 elections, opinion polls only credited Naheed Nenshi with eight per cent support but extensive use of social media combined with tireless door stepping – his supporters even organised coffee parties in their homes where Nenshi explained his vision – propelled him to victory on election day. Three years later the Mayor was re-elected with almost three quarters of votes cast.

Nenshi, who embodies the face of change in Canada’s once-conservative, white-bread energy capital of Calgary, has been a political star since he not only adroitly provided leadership in the historic flood that ravaged the city in 2013, but did so with panache. He is a known policy wonk, former academic, a self-styled “brown guy,” a liberal willing to fetter some business, and an Ismaili Muslim.  He was profiled by Brian Brennan in Canada’s Mayor, the first original feature in the inaugural issue of Facts and Opinions. (The magazine story was awarded Runner-up, Best Feature Article, 2014, in the Professional Writers Association of Canada Awards.)

The other 2014 winners of the World Mayor project are:

The British-based World Mayor philanthropic organization, which refuses advertising and donations, said in its manifesto its aim is to raise the profile of mayors worldwide, “honour those who have made long-lasting contributions to their communities and are committed to the well-being of cities nationally and internationally.”

“In this century, metropolitan areas, rather than nation states, will shape the world’s social, cultural, technological and economic agendas. This process will lead to increased competition for human, intellectual and material resources but will also force cities to co-operate with and learn from one another,” said the project.

“An outstanding mayor must possess qualities such as: honesty, leadership and vision, good management abilities, social and economic awareness, ability to provide security and to protect the environment, as well as having the skill to cultivate good relations between communities different cultural, racial and social backgrounds.”   Contenders area also required to sign a statement of ethics.

Canada’s Mayor by Brian Brennan (paywall, accessible with a $1 day pass for the entire site, or by subscription.)

*Help sustain independent, non-partisan and professional journalism by buying a $1 day pass or subscription to Facts and Opinions. An online journal of first-rate reporting and analysis, without borders, F&O is employee-owned, does not carry advertising, and is funded entirely by readers. Click here to purchase a $1 day pass or subscription, from $2.95/month to $19.95/year. Receive free blog emails via the form on FRONTLINES. Thank you for your patronage. Please tell others about us.