Although musical satirist Tom Lehrer had not been active as a performer and recording artist for 15 years when Arts columnist Brian Brennan met him in 1980, he still had a cult following of enthusiasts who fondly remembered his trenchant observations of 1950s’ American life and politics. An excerpt of Brennan’s Brief Encounters column, The Media-shy Satirist: Tom Lehrer: 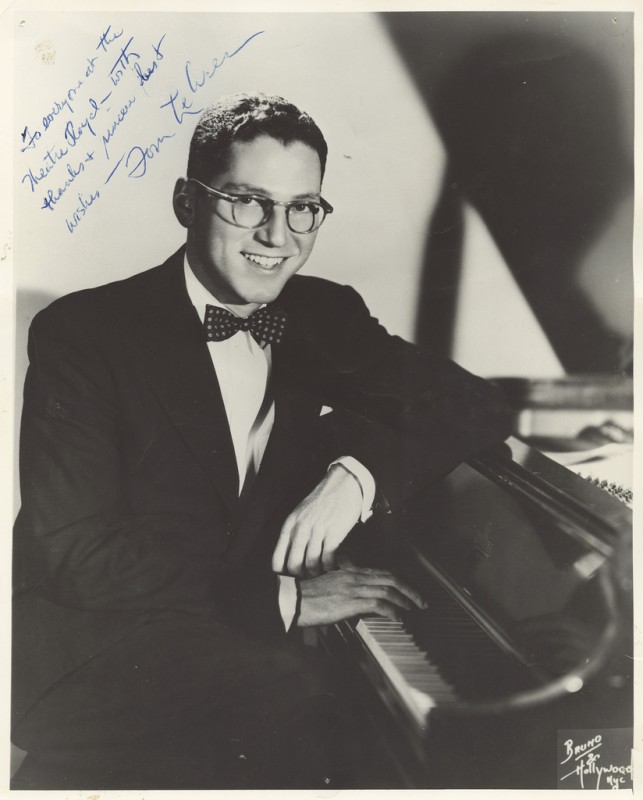 A photo of Tom Lehrer signed, “To everyone at the Theatre Royal – with thanks and sincere best wishes – Tom Lehrer.” Image provided by the Tasmanian Archive and Heritage Office.

The Associated Press called him the J.D. Salinger of musical satire. Tom Lehrer was a brilliant American songwriter with a sardonic wit who scored big with the college crowd in the 1950s, only to walk away from it all in 1960 when at the height of his fame.

There were rumours for a while that he was dead. Lehrer admitted encouraging them, hoping they would cut down on his junk mail. There were also rumours that he quit show business because Henry Kissinger won the Nobel Peace Prize. Those too were false. Kissinger received the Nobel in 1973, eight years after Lehrer finally stopped performing professionally. But Lehrer did acknowledge telling a reporter once that political satire became obsolete when Kissinger was awarded the Nobel.

The rumours persisted because Lehrer had vanished without a trace. He didn’t do television appearances (“the only thing I would prefer more is to have my eyes gouged out with steel needles”) and he only gave newspaper interviews on the very rare occasions when he had something to promote. … read more (log in first –paywall*)