Why Bernie Sanders need to fight on … and surrender

I’m not going to pretend I’m a Bernie Sanders supporter. I’m not. I’ve explained in earlier columns why I back Hillary Clinton, even though I’m ideologically much closer to Sanders on almost all of the important issues.  After living in the United States for nearly a quarter century, and seeing how the mainstream media, the right-wing echo chamber, never-ending political gridlock, religious politics, and unfettered access to money combine to create a fetid political miasma, I believe that Bernie would be a sitting duck in this fall’s presidential election, regardless of what the polls say right now. The right hasn’t even started to turn its guns on a self-declared socialist. I can see the ads now.

It looks like the end is nigh for the Sanders campaign. After a double-digit loss in New York, and looming double-digits losses in Pennsylvania, Maryland, Connecticut and Delaware, a Sanders win ain’t gonna happen. All the talk by die-hard Bernie supporters of stealing away superdelegates is just that – talk. And Sanders will lose for one main reason – a total inability to connect with minority voters. If he had just drawn even with Clinton with voters in these communities he would be the nominee for sure. But his campaign has mainly appealed to young white progressives, which is an important audience, but without black and Hispanic voters, you will not even get nominated as a Democratic dogcatcher.

(I’m still waiting to see a thorough analysis of why this happened.)

It’s time for Sanders to come to grips with this reality and to start thinking about November. The most important thing is to beat the Republicans, and the Democrats have a golden chance to win back the Senate AND the House because of how the Republican party’s nominating contest has turned into a combination freak show, wrestling cage match and car wreck. It doesn’t matter if it’s Trump or Cruz. Since the GOP contest will probably last until late July, in Cleveland, the Democrats have a golden opportunity to define the terms of the election now, and make a start on defining who the party will be up against.

But that can’t happen if Bernie Sanders and his supporters keep vilifying Clinton. As comedian Patton Oswald, a big Bernie supporter but a realist, said in a recent interview, if you’re a Democrat but you hate Clinton so much you would rather have Trump as president, then, “You’re a fucking child.”

But it is absolutely necessary that Bernie not give up running. Yes, he should start to encourage his supporters to support Clinton. I am, however, totally in favor of him building up his delegate total and going into Philadelphia in late July demanding that the party’s platform reflect his point of view.  He should also pressure Clinton to pick a vice-presidential candidate who reflects his view. Someone like, say, Sen. Elizabeth Warren of Massachusetts.

Warren would be the perfect pick. She is as progressive as Sanders on all the issues that young voters care about. It would be much easier for them to support Clinton if they knew Warren was her backup. She is super intelligent, and fearless. The traditional roll of a vice-president nominee is to say the things about the opponent that a presidential candidate can’t. It’s my opinion that Warren would reduce Trump or Cruz to tears. And heaven help the poor man or woman the GOP pick as their vice-presidential candidate in any debate against her.

Bernie Sanders can bring about change in the Democratic Party in a way that no other candidate has. It’s important that he does so. If the Democrats want to take advantage of the party’s growing support among young people, and the demographic changes in their favor, they need to move forward. Repeating what Barack Obama did is not enough.

That’s why Bernie Sanders needs to both surrender and fight on. It’s time to act. He can both help the Democrats overwhelmingly win the next election, and change the party forever.  I know that would not be the ultimate prize, but it would be a victory not to be sneezed at. 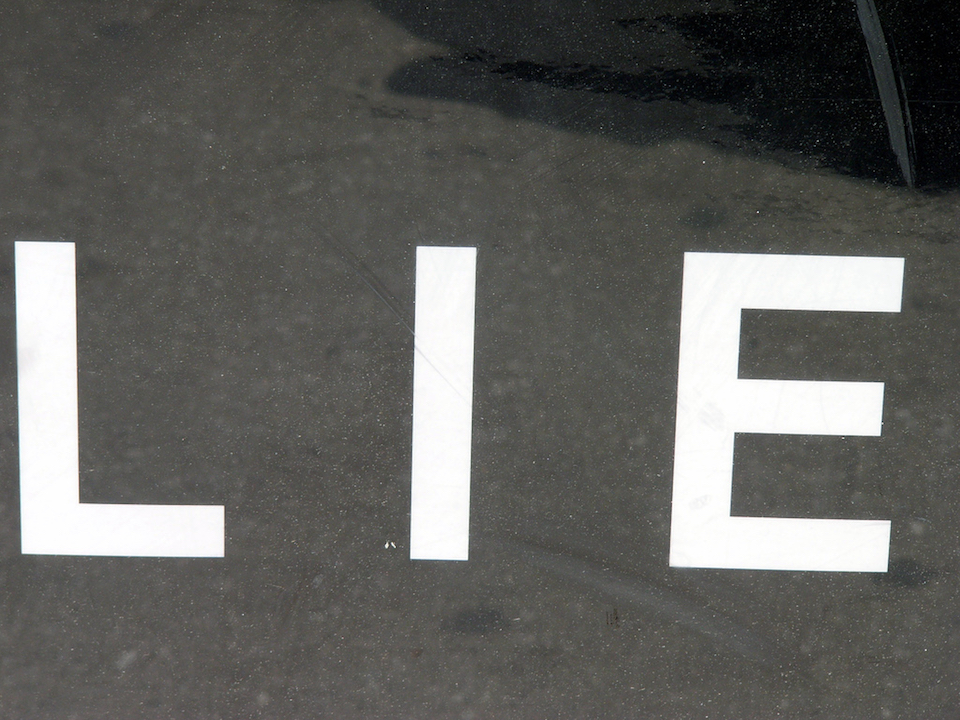 Lies fall from politicians lips like leaves fall from the trees in autumn. Most of the heaviest lying is taking place on the national level, at the moment particularly within the Republican Party (more on that below). But you can find lying at almost every level of political office.

Here in Virginia, where I currently live, we have an election this week. It’s not a big election. No governors nor senators nor a president being elected. Just elections for the state house and senate, local sheriff, the other odd office. But lying is on full display. Candidates lie about the policies they would enact. They creatively ‘embellish’ past achievements. And they lie about, and twist, the things their opponents have said and done. And often these are not little lies, but great big whoppers, sometimes made of whole cloth.

And when lying doesn’t work, fear is the fall-back strategy.

“Be afraid, be very afraid of electing my opponent because his or her election means your pocketbook, your religion, your guns, your children’s school, your very lives, might be in danger.”

Truth is more elusive than Susquatch and just as well hidden. And like Susquatch, the question is, does it really exist?

It certainly doesn’t among the men and women running for their parties’ respective presidential nominations. While Hillary Clinton and Bernie Sanders are no saints when it comes to truth telling, they are novices compared to the Republican candidates.

You would need a calculator to keep track of the lies and fabrications spun out like cotton candy during this party’s recent presidential debates. Donald Trump, for instance, is a veritable Grand Master of Outrageous Statements. And Dr. Ben Carson, who is just as bad as Trump at inventing scenarios but lacks his over-the-top craziness, and so is taken more “seriously” by observers, just plain lies.

Even second-tier candidates know the game. Candidates like Carly Fiorina lie about seeing controversial videos, and Jeb Bush lies about what his brother did in the war on terror. They refuse to admit that they are wrong, even when confronted with the facts, because admitting you lied is the worst of all possible political sins.

But Trump and Carson are too outrageous, each in their own way, to be ultimately victorious. And candidates like Fiorina and Bush are too irrelevant to worry about.

It’s the quiet lies and twisted truths of Sen. Marco Rubio and Sen. Ted Cruz that are more worrisome. Some of their policy statements defy mathematical and scientific logic, but in the lying season you are not judged on your truthfulness, but on how well you can tell the lie and your ability to maintain the lie.

And when, now and then, the media plucks up enough courage to actually say, “Hey, that’s kinda B.S.”, the cries of bias ring out like church bells on Christmas Day. In the GOP, the cries are almost always of liberal media bias, while in the Democratic Party, the cries tend to be more focused on the individual journalist being “unfair,” rather than the entire group.

After a while, you get tired of the people who are supposed to represent us treating democracy like shit.

Then again, maybe they represent us better than we would like to admit.

It’s no blazing insight to say that politicians lie in order to get elected, and keep lying so that they can remain elected. Politicians have been doing it forever.

What’s different is our willingness to accept these lies. Thanks to things like polls, focus groups, surveys, social media, etc., politicians know exactly which types of lies will work with what group of people and in what area. They tailor their lies so that confirmation bias becomes their greatest political asset. (Trump says all Mexicans are dangerous and bad, although stats show that whites have a far greater incarceration rate. Truth doesn’t matter, because these lies play to the confirmation bias of the GOP’s racist base, for whom the lie was told in the first place.)

Mendacity has become the political standard and truth-telling is seen as stupid and a sign of weakness. But perhaps even worse is that ‘truth’ has also taken on a new meaning. It is no longer absolute, but is now only relevant to particular groups in particular ways. In a very post-modern sense, truth is what a politician tells you is true, regardless if it is or not.

And this, for me personally, is the great danger. Lies have become the ‘truth’ for too many people. Genuine truth creates too many problems: it asks us to change, to be different, to move out of our comfort zone in order to create a better democracy. Believing lies are true lets us off the hook. Our democracy shrinks and becomes sterile, but we remain ‘safe.’ And this is particularly true in Western nations in the past decade.

As I said above, it is the lying season in American politics. I’m afraid it’s become the only season we have left.