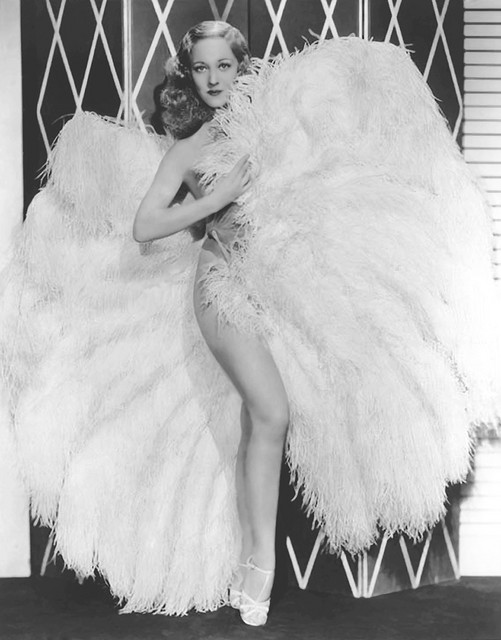 Fan dancer Sally Rand was still dancing nude on stage with her trademark ostrich-feather fans when she was in her 70s. In his new time capsule piece, Arts columnist Brian Brennan recalls that she wouldn’t dance while the television cameras were rolling. That, she said, “would destroy the illusion.” And excerpt of Brennan’s latest  Brief Encounters column, The Fan Dancer: Sally Rand.

My assignment was to interview a 71-year-old grandmother who danced nude while waving a couple of big white ostrich-feather fans like the veils of Salome. She had been a star in 1933 when she created a sensation at the Chicago World’s Fair, but now she seemed more of a curiosity. A 1972 article in The Village Voice had been headlined, “What do you say to a naked 68-year-old lady?”

“If I were to give it up, what would I retire to?” she replied. “Sitting on a patio doing needlepoint? Yecch.” She had been doing the fan dance 40 weeks a year for the previous 42 years, and planned to keep going until she died … log in first to read The Fan Dancer: Sally Rand (subscription required*)

*Facts and Opinions is a boutique for slow journalism, without borders. Independent, non-partisan and employee-owned, F&O performs journalism for citizens, sustained entirely by readers: we do not carry advertising or solicit donations from foundations or causes.  Why? If you’d like to support our journalism, for $2.95 (the price of a cheap brew) you can subscribe to F&O for a month. If that breaks your budget, a one-day pass is $1. A subscription is required for original F&O work.