Oddly, the new column by Natural Security columnist Chris Wood brought to my mind a sign outside a university chemistry lab when, a lifetime ago, I was studying biology. “If you’re not part of the solution, you’re part of the precipitate,” it quipped. It’s a bit of goofy scientist humour — but reading Wood’s piece, I thought, he is part of the solution — because he clearly lays out the problems we face, and presents the solutions needed. The problems of preserving a livable earth are not trivial — but they are, in theory, solvable ones, argues Wood. An excerpt of his new column, Clam rolls: 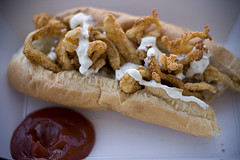 At the other end of the scale, consider a document leaked from the United Nations’ Environment Program — the organization that produces those once-every-five-years global compendia of climate science — in the last few days. It confirms that the clams’ dilemma is being replicated around our planet, that we humans stand to lose much more than our regional cuisine, and that the singular reason for all of this is one we are well aware of: carbon. … log in first (subscription required*) and click here to read Clam Rolls.

Seals, otters and other species around the world are increasingly being infected by parasites and other diseases long common in goats, cows, cats and dogs, marine mammal experts told a major science conference. 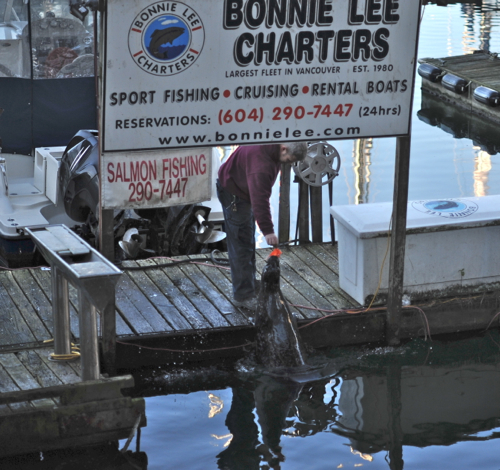 And the diseases also increasingly threaten people who use the oceans for recreation, work or for seafood, scientists told a news conference at the annual meeting of the American Association for the Advancement of Science, in Vancouver.

The symposium “Swimming in Sick Seas” was just one of many sessions at the conference to draw a bleak picture of the state of the world’s oceans, which are increasingly acidic, warming in some areas, being inundated with melting ice, and experiencing other climate change effects.

“There are dramatic shifts in the ocean ecosystem,” said Jason Hall-Spencer of the UK University of Plymouth. His research in Italy, Baha California, and Papua New Guinea is “all showing the same thing. As you increase CO2 you get a 30 per cent drop in microbes, plants and animals” in the oceans.

Gretchen Hofmann of the University of California at Santa Barbara said increasing ocean acidity, caused by CO2 from fossil-fuel burning, is killing the young of shellfish – called spat –worldwide.

In the Pacific Northwest region of Canada and the United States, the failure of spat hatcheries threaten a commercial industry worth more than $200-million (US), said Hofmann.

Lisa Levin of the Scripps Institution of Oceanography in La Jolla,California, said  warming of the water reduces how much oxygen it can hold, newly threatening deep-sea creatures that have survived for millennium under stable conditions.

“We’ve seen less than 5 per cent of (animals) on the deep sea floor, and if we’re wiping them out we’ll never see them,” Levin told the conference. “There are undoubtedly organisms down there that can be very beneficial to us, that we have yet to find.”

“I see the dead mammals coming ashore as canaries in a coal mine,”said Trites, director of the Marine Mammal Research Unit in at the Fisheries Centre at University of British Columbia.

Parasites, funguses, viruses and bacteria are increasingly passed from land to sea animals because human settlements on coastlines change water patterns through paving, in-filling of wetlands that are natural filters, and intensive agriculture run-off, said scientists.

Diseases from large agriculture operations can cause “abortion storms” in sea animals, said Michael Grigg, an American expert in parasites with the National Institutes of Health in Bethesda, Maryland.

Grigg said a virulent new Type X strain in California “is now spreading across the United States” and samples have found it in South America and Asia. Grigg noted strains of Toxoplasma gondii are already common in people, infecting as many as 25 per cent of  North Americans and from 50 to 70 per cent of adult Europeans.

Changes and frequency of diseases in sea animals “could have unrecognized impacts on humans as well,” said Melissa Miller, a veterinarian in California. “We live in the same areas, and harvest and eat many of the same foods.”