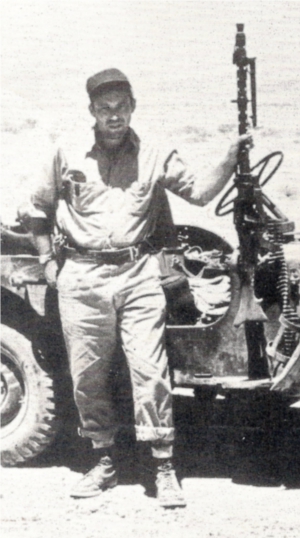 Leon Uris with a patrol in the Negev Desert, in the 1950’s. Photo scan from the Doubleday book cover of Exodus via Wikipedia.

Leon Uris prided himself on being a popular historian who did his homework, as well as being a bestselling novelist. However,  Arts columnist Brian Brennan dared to question the accuracy of his historical research. An excerpt of Brennan’s Brief Encounters column: From High School Dropout to Brand-name Novelist: Leon Uris:

I must admit I came loaded for bear when I went to interview bestselling American author Leon Uris. Earlier, I had written a negative review of Trinity, his 751-page novel dealing with Northern Ireland’s politics of violence. After spending the first 23 years of my life in Dublin, I figured I knew a thing or two about Irish history. I said in my review, and repeated it when I met Uris, that the book offered a simplistic and distorted view of history because it castigated the British as oppressors and portrayed the forerunners of the Irish Republican Army as valiant freedom fighters.

“I think you’re mistaken and you’re trying to bait me,” responded Uris. “Every responsible scholar I know has said that this book follows very accurate historical lines.”

When I offered him the name of one scholar, Wayne Hall, who begged to differ, Uris dismissed the criticism on grounds that Hall “must be an Englishman.” (Hall was actually American, then teaching Irish literature at the University of Cincinnati.) Baltimore-born Uris had a thing about the English, it transpired. They hadn’t liked his blood-and-thunder novel Exodus, about the birth of Israel, because he described Great Britain as a “tired colonial power sitting between two warring communities.” …  log in or subscribe* to read From High School Dropout to Brand-name Novelist: Leon Uris.

*You’ll find lots of great free stories inside our site, but much of our original work is behind a paywall — we do not sell advertising. We do need and appreciate your support – a day pass is a buck and monthly subscription costs less than a cup of coffee.