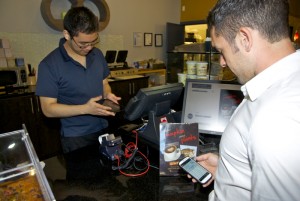 The world’s first ATM capable of swapping bitcoins for any official currency started operating this week in a coffee shop in Western Canada.

Bitconiacs, a storefront currency exchange owned by three 20-something entrepreneurs, claims to be first in the world to set up an automatic teller machine dedicated to the digital currency.

The machine stands flush against a wall at the Waves coffee shop in downtown Vancouver at Howe and Smithe streets. At first glance it looks much like any other automated teller. But instead of using bank or credit cards to distribute cash it lets customers deposit Canadian dollars into their online bitcoin account, or withdraw cash using their bitcoins, via an online exchange.

The coffee shop  is one of some 15 city businesses in the city to accept the digital money.

Bitcoins – sometimes called the currency of the so-called “Dark Web” – are based on an algorithm invented in 2008 by an anonymous computer scientist known by the pseudonym Satoshi Nakamoto. In recent years bitcoins have become popular in high-inflation countries such as Argentina, in Germany (which recently declared them officially a “private currency,”) and in cities popular with high-tech entrepreneurs. The currency, yet to be regulated by any government, has run into its share of controversies. It’s volatile, has been utilized by drug gangs, and poses challenges for tax authorities. It’s also increasingly embedded in  the investment community, and has drawn interest from a range of activists from libertarians to social entrepreneurs.

Watch for an upcoming Facts and Opinions feature on the new digital currency, and its implications for governments, policy makers and citizens.