Climate March well-meaning — but means next to nothing 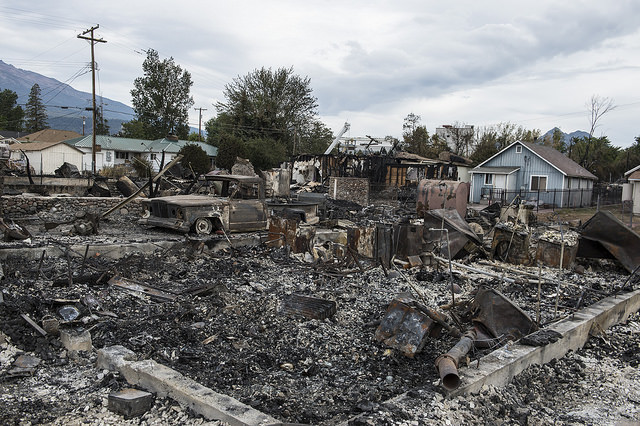 This isn’t the Bastille of the Climate Revolution. Not even close.

What organizers are billing as “the largest climate march in history this weekend,” hopes to draw as many as 150,000 people to New York City to urge leaders from 120 countries meeting there for the Climate Summit on Tuesday to kick up the pace of response to climate change. 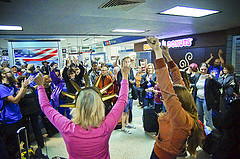 People celebrate the September 19 arrival of the Climate Train at Penn Station in New York, where more than 100,000 people are expected to join the Climate March Sunday, prior to the Climate Summit at the United Nations September 23. Photo by Light Brigading via Flickr, Creative Commons

I don’t mean to be mean, and I applaud the goodwill of everyone involved, but 150,000 people, if they get that many (and usually in these things actual warm body counts fall far short of heady expectations), in the streets of a city of eight million otherwise-occupied souls, will mean next to nothing to the men keeping climate action in first gear.

For one thing, 150,000 is a corporal’s guard compared, say, to the conservatively estimated (by the BBC) six to ten million people who mustered out to protest President George W. Bush’s invasion of Iraq. That was one country about to commit one egregiously arrogant as well as stupid, act. If ten million people couldn’t get America to think twice about an invasion of choice, a relative platoon isn’t going to budge the keystone predators of the financial and fossil-fuel industries or their political chattels.

For another, the people abandoning the defense of our families, our economic savings, and our communities from the increasingly extreme violence of climate disruption, won’t be in New York. Both Canada’s Prime Minister Stephen Harper and Australia’s Tony Abbott — who have jointly put the rest of the world on explicit notice that they’re willing to see much of it destroyed (I mean this literally) so long as their economies prosper — are snubbing the event. So, as far as we know, are the Koch brothers, Charles and David, and Rupert Murdoch—among Harper and Abbott’s much more powerful analogs in the plutocracy.

So again: full marks for sincerity to the New York marchers. But sincerity only goes so far. The United Nations Climate Summit is no Bastille in the economic revolution (or something very close to it) that might just possibly keep our society from tumbling into the pit of our own ecological overdraft. Those Bastilles are in places like Ottawa and Canberra and Palm Springs, where the Koch Brothers annually gather their followers and sycophants and Congressional marionettes.

Turn up there with 150,000 men and women and kids righteously pissed off about having their future destroyed, and some of those leaders might just begin to worry enough about their own future to re-consider their neglect of our natural security.

Journalist and author Chris Wood’s most recent books and articles focus on the environment. Read his Natural Security column for F&O here (subscription*).

**You’ll find lots of great free stories inside our site, but much of our original work is behind a paywall — we do not sell advertising. We do need and appreciate your support (a day pass is a buck and monthly subscription costs less than a cup of coffee), but if you’d like to give us a try before throwing pennies our way, email Editor@factsandopinions.com, and I will send you a complimentary day pass.

Facts and Opinions is a boutique for slow journalism, without borders. Independent, non-partisan and employee-owned, F&O is sustained entirely by readers: we do not carry advertising or solicit donations from foundations or causes.  Why? We appreciate your interest and support:   you can subscribe to F&O or buy a one-day pass for $1. A subscription is required for most F&O original work. Subscribe for free to Frontlines by entering your address in theform on the right (we won’t share your address), or follow us on Facebook or Twitter.