The Return of Doctor Who 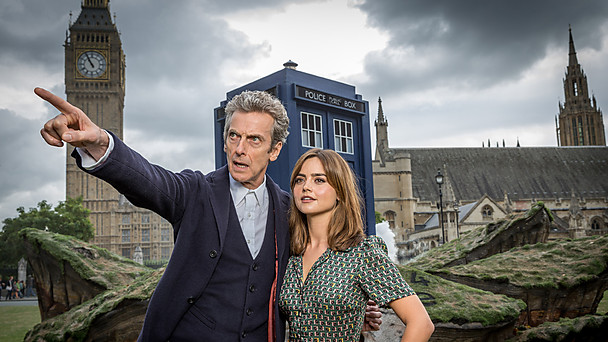 The Doctor returns on Saturday.

Oh. Why, that would be Peter Capaldi, the latest actor to play the science fiction character Doctor Who. He is apparently loved by nerds, muggles and regular folk alike as he and his companions “travel through time and space in a miraculous police box called the TARDIS.” That’s the description by Netflix on one of the many Doctor Who series it offers. The new series can be seen in many countries on television, for those who still have one of those antiquated devices, or live-streaming: this fan site, Dr. Who.com, lists the channels, most of which have online sites, airing the new show.

For fans of a serious bent, we offer a thinky piece about Doctor Who’s usefulness to religious educators, by British historian Andrew Crome, in F&O Arts. “Promoting understanding of the interaction between religion and popular culture allows us to see that religion isn’t a hermetically sealed set of ideas untouched by the contemporary world,” Crome writes. “…  it is a dynamic and shifting force. Like Doctor Who, religion evolves, changes and regenerates in different cultural situations – and studying it is a real “adventure in time and space.”

The teaser trailers and articles that have been tantalising  fans for months are now reaching a crescendo, with the first episode of the new series due to air on August 23. And they promise a new era. The new Doctor, Peter Capaldi, is already being promoted as offering a darker take on the role than his predecessor Matt Smith, and the production team have highlighted a slower pace of storytelling and less flirtatious relationship between the Doctor and his companion Clara (Jenna Coleman).

Although these changes will probably be a lot less noticeable than promotional material has suggested, recent trailers have certainly highlighted the bleaker aspects of the Doctor’s character. In a recent teaser, a Dalek voice is heard saying: “I see into your soul, Doctor … I see beauty, divinity, hatred!”

The choice of terms is interesting. Two are specifically religious concepts – the soul and divinity – which might initially appear out of place in a science fiction series. But this is far from the truth … read Doctor Who: Supernatural, Religious — and a teaching tool?

*Facts and Opinions is a boutique for slow journalism, without borders. Independent, non-partisan and employee-owned, F&O is sustained entirely by readers: we do not carry advertising or solicit donations from foundations or causes.  Why? We appreciate your interest and support:  for $2.95 (the price of a cheap brew) you can subscribe to F&O for a month. If that breaks your budget, a one-day pass is $1. A subscription is required for most F&O original work. Subscribe for free to Frontlines by entering your address in the form on the right (we won’t share your address), or follow us on Facebook or Twitter.