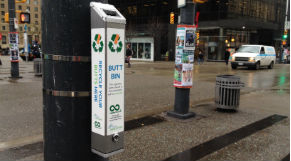 Vancouver, Canada’s west-coast big city, is known globally as host of the 2010 Winter Olympics, as North America’s (and one of the world’s) most expensive places, as the birthplace of Greenpeace, home to the world’s first automated-teller-machine to swap cash for bitcoin virtual currency, and as a production centre for a strain of hydroponically-grown marijuana known as BC Bud.

Today the city claimed another “first:” it installed 110 receptacles to recycle cigarette butts. The butts, which litter the landscape and often end up in the ocean to poison sea life, will be made into building materials, among other things, by TerraCycle, a company working with the city on a pilot butt-recycling project.

“Filters are made from cellulose acetate, and they never lose their toxicity and can poison essential links in the aquatic food chain,” said a joint Vancouver-TerraCycle announcement.