Apocalypse now: our obsession with the end of the world 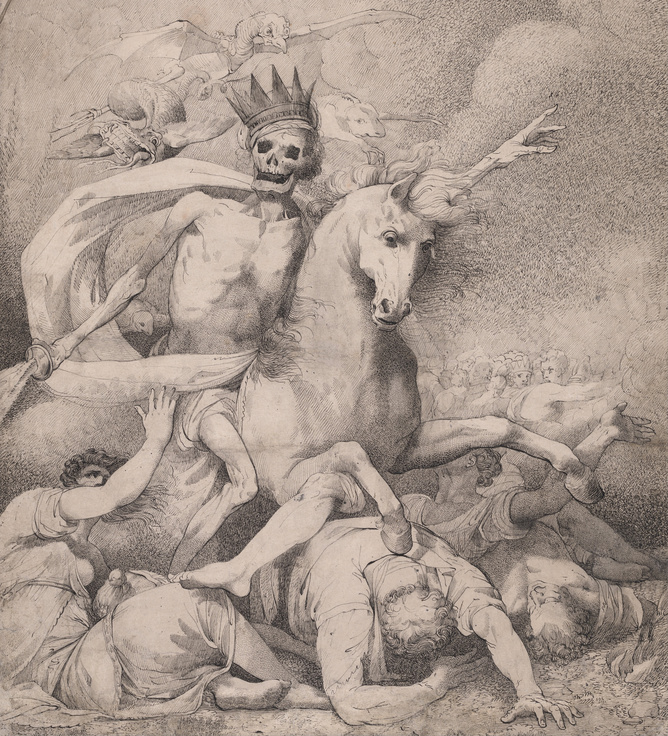 As is typical of our time, over the past few months, many newscasters have used the words apocalypse or apocalyptic to evoke the negative implications of events as diverse as the threat of Grexit, music streaming wars, an asteroid threat, the American housing market, the migrant crisis, the continuing war in Syria and the negative state of the world more generally. Not to mention the flurry of posts which have appeared about upcoming instalment in the highly successful X-Men franchise, X Men: Apocalypse or our obsession with zombies.

We have reached a point where apocalyptic vocabulary litters writing, where Armageddon, the Four Horsemen, the Antichrist and many other words and phrases also lifted from the last book of the Bible, the Book of Revelation (or the Apocalypse as it is sometimes known), are used as a sort of shorthand for the calamitous times that we live in. In a way it is understandable: in a world of 24-hour news media, headlines have had to reach fever pitch in order to grab readers’ attention. Referencing the “end of the world” is, seemingly, the only thing that will suffice.

But calling upon apocalypticism so much ultimately has a numbing effect, whereby the state of the music industry is discussed using precisely the same terms as world poverty. Where man-made crises are viewed through the same apocalyptic prism as natural disasters such as the possible asteroid collision. There is a real sense in which the word apocalypse and its associated lexicon has lost its true meaning and impact.

This apocalyptic glut may be a recent thing in journalism, but such hypochondria isn’t actually a contemporary human trait. Taking a look at art through the centuries shows that each generation, each epoch, has seen themselves apocalyptically, albeit with great differences as to what the actual end will involve. As we explore in our recent book, Picturing the Apocalypse, each depiction of the end of the world gives away a lot about what the most pressing concerns were at the time.

In medieval times, the apocalypse was frequently figured in terms of national and cultural adversaries. So in the 13th century, the rise of anti-Semitism meant that Jews featured heavily in apocalyptic depictions, as seen in some beautiful Anglo-Norman illuminated apocalypse manuscripts. Christ and his followers are depicted as medieval knights, while the forces of Satan are sometimes depicted as Jewish, as in the Lambeth Apocalypse of c. 1260. This sentiment culminated with the expulsion of the Jews in 1290.

Or in France, it was the English who were drafted in to herald the world’s end. In a similar way, in the French life-size 14th century Angers Apocalypse Tapestry (1373-80), the followers of the Beast (a metaphorical manifestation of Satan) are clearly English soldiers (it was, after all, the time of the Hundred Years War). Angers is also interesting in being one of the first occasions that the famous fourth Horseman – the bringer of death – is himself depicted as a skeleton, an interpretation which became increasingly common in the centuries to come. 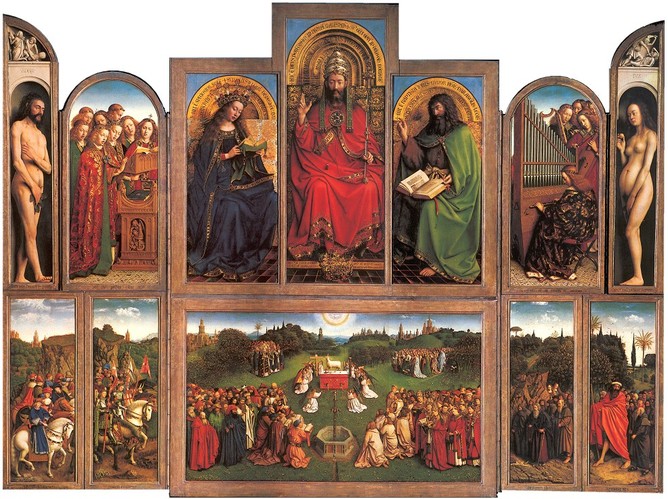 Soon things turned more subjective. Memling and Dürer, for example, fixated more on the nature of the visionary experience via the figure of John of Patmos, the seer of the apocalyptic events that preceding the New Jerusalem. Dürer’s Apocalypse series of 1498 depicts John in his own likeness, the (rather grandiose) implication being that he is re-seeing the apocalypse for his own times.

During the Reformation, the Book of Revelation became an ever richer source for visual polemic. Apocalyptic images became vehicles for theological and even political propaganda. Cranach the Elder, for example, created illustrations for Luther’s first German translation of the New Testament of 1522, in which the Whore of Babylon was depicted wearing a papal tiara. This cemented the link between the papacy and Satan (in the minds of those with reforming tendencies at least).

In the 18th century, the cartoonist James Gillray capitalised on the contemporary artistic obsession with the Fourth Horseman of the Apocalypse (Death) to create a memorable cartoon depicting William Pitt, the Prime Minister of the day, as the rider of the Fourth Horseman, a pointed critique of Pitt’s cynical regime (1795).

Cartoonists have continued to plunder the Book of Revelation to populate satirical images into the 20th and 21st centuries. Subjects as diverse as the Nazis, the G7 (in the 1970s), Barack Obama and contemporary culture more generally have taken a satirical apocalyptic turn. Both Max Beckmann and Otto Dix drew heavily on apocalyptic themes and the Book of Revelation as inspiration for their images critiquing the World War I and II.

So what constitutes an “apocalypse” has mutated dramatically over the centuries, from the English to the Jewish to Barack Obama. And the torrid apocalyptic speculation surrounding our own era is nothing out of the ordinary. The journalists alluded to at the beginning of this piece are drawing on a distinguished and rich apocalyptic tradition, the details of which may have been updated to reflect new global developments and social trends but, as with previous generations, the ways in which we frame our apocalyptic expectations act more as a mirror to our collective anxieties than as signposts to an actual apocalypse.

But perhaps the truest representation of the ultimate meaning of the Book of Revelation (the main source for the Western conception of the apocalypse and apocalyptic more generally) is to be found in Van Eyck’s sublime Ghent Altarpiece of 1432. In this painting, the Lamb of God is the centre of a paradisial vision of the New Jerusalem, the new reality which will follow Armageddon and the Last Judgement, set against a background of Flemish churches.

This altarpiece reminds us of something that may surprise the modern reader or viewer: the central character in the Book of Revelation and indeed of the apocalypse itself, is actually the Lamb of God or Christ (sometimes referred to as the Rider on the White Horse), rather than Satan or Death. Christ redeems those who believe from the woes and disasters which afflict followers of Satan and his Beasts, and it is hope, rather than destruction, that actually characterises apocalyptic thought. Perhaps this is something we would do well to remember.

Natasha O’Hear is Lecturer in Theology & Visual Art at University of St Andrews and Anthony O’Hear is Director of the Royal Institute of Philosophy at University of Buckingham. This article was originally published on The Conversation. Read the original article.