Anwar Ibrahim and a campaign of political vilification in Malaysia 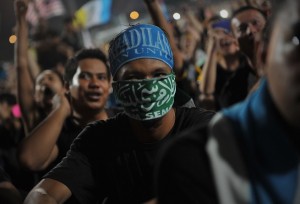 Malaysians protested in Kuala Lumpur on May 8, 2013, against national elections they claim were stolen through fraud by the coalition that has ruled for 56 years. Photo by Firdaus Latif, Wikipedia.

In the end, what happens to Strauss-Khan is neither here nor there: a matter of no significant public importance. But the public reaction to the imprisoning of Anwar is another question. … log in to continue reading Co-opted judiciary sentences Malaysia’s Anwar Ibrahim to 5 years (subscription required*)

Another case of truth is stranger than fiction: For 16 years Malaysia’s establishment has managed to thwart the political efforts of the country’s opposition leader, whose followers have remained loyal despite the horrendous allegations against him. Now, once again, a Malaysian court has dealt him a setback. International affairs analyst Jonathan Manthorpe looks at the big picture. Excerpt of his new column:

Today’s conviction of Malaysia’s opposition leader, Anwar Ibrahim, for sodomy in a clearly politically motivated trial, may well backfire on the ruling Barisan Nasional coalition and bring its downfall in the next elections. A Court of Appeal in Kuala Lumpur today upheld an appeal by the state, overturned Anwar’s 2012 acquittal by the High Court, and sentenced him to five years in prison for sodomizing an aide, Mohd Saiful Bukairy Azlan. Anwar is free on bail and expected to take his final line of recourse to the Federal Court. The judicial persecution of Anwar by the government has been going on for 16 years …

Log in to read the column, Malaysia’s opposition leader Anwar again convicted after fake trial.* You will certainly wish to revisit Manthorpe’s previous column — with a title that explains all: Murder of Mongolian fashion model dogs Malaysia’s Prime Minister.*