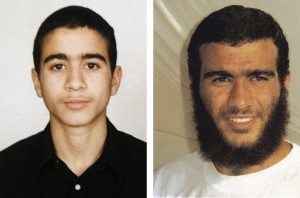 Omar Khadr, undated photo.
Omar Khadr was taken into US custody when he was 15 years old on 27 July 2002 in Afghanistan, he was transferred from Bagram airbase to Guantánamo Bay in October 2002. He says that as soon as he arrived he was subjected to a range of torture and ill-treatment: being short-shackled by his hands and feet to a bolt in the floor and left for five to six hours; being kept in extremely cold rooms; being lifted up by the neck while shackled, and then dropped to the floor; being beaten by guards; having a finger pressed into a pressure point in his neck, causing severe pain and inability to breathe.