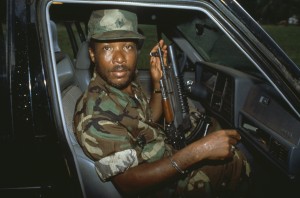 09 Jun 1990, Buchanan, Liberia — Charles Taylor, leader of the National Patriotic Front of Liberia (NPFL), is taking his forces to Buchanan, Liberia. Responding to years of government corruption and oppression, in 1989 Taylor and the NPFL launched a revolt against President Samuel Doe, seizing control of much of Liberia and plunging the country into massive civil war until 1996. | Location: Near Buchanan, Liberia. — Image by © Patrick Robert/Sygma/Corbis