Where I live, in the Pacific Northwest, aboriginals and many newcomers refer to ourselves as The People of the Salmon. This week, sports fishing was cancelled, alongside closed commercial harvests, on the mighty and mythical Fraser River. Too few wild salmon are returning from the Pacific Ocean to spawn, said the joint Canada/U.S. Pacific Salmon Commission. The waters are nearing historically hot temperatures, and flowing much lower than average.

We are all occupied this week by sports in Rio, grotesque politics in the United States, endless wars in the Middle East, and global financial markets in flux. Earth Overshoot Day on Aug. 8 received little attention (see below). Nor did major reports on global warming and humanity’s impact on wildlife (see F&O stories, below).  But it’s salmon that lingers in my mind as I scan headlines about these  issues. What if the salmon vanish, as fisheries have vanished elsewhere? What becomes of the People of the Salmon when the salmon are no more?  What, in your own corner of this small world, is your equivalent of salmon — and how is it faring?

On that poignant note, here is F&O’s line up this week: from a beautiful photo essay honouring a photographer’s grandmother, to the Philippines, to Trumpian America. From finding joy in life to solving the plastics problem. From Turkey’s Fethullah Gülen, to the environment. We aim to offer provocative, informing journalism that matters. Drop us a line and tell us how we’re doing, at editor@factsandopinions.com. And, as always, if you value what we do, please contribute (below). We are supported by readers only, to avoid the conflicts of interest that accompany advertising and running sponsored (fake) stories.

Trump is a feeble version of the Philippines’ Duterte, by Jonathan Manthorpe, International Affairs Column

Joy in doing something you love, badly, by Tom Regan  Column

Florence Foster Jenkins, the subject of a Meryl Streep/Hugh Grant film, had a very interesting career as a bad singer. But why was she a role model for my daughter?

How a Global Treaty on Plastics Can Work, by Nils Simon Expert Witness

Why has plastics pollution been so intransigent from a global governance perspective? Two options seem most viable for crafting a binding international agreement to deal with plastics.

On Oct. 11, 2015, the day Nonna died in Biella, Italy, I was across the world in Brooklyn, New York. I had spent five months with her, celebrating her life instead of mourning her death.

Presented by his followers as a learned scholar and orator, Fethullah Gülen leads a transnational social and economic network. If Gülen helped orchestrate the July coup in Turkey, as the government claims, tens of thousands of affiliates and sympathizers, as well as those of us who have tried to more objectively study this man and his movement, will need to come to terms with one of the most fantastic frauds in modern history.

Climate change threatens 19% of globally threatened and near-threatened species. It’s a serious conservation issue. Yet our new study, published in Nature, shows that by far the largest current hazards to biodiversity are overexploitation and agriculture.

The Earth is so hot this year that a limit for global warming agreed by world leaders at a climate summit in Paris just a few months ago is in danger of being breached.

The New York Times Magazine devotes a special issue to one 40,000-word article on more than a decade of war, terror and revolution in the Middle East, Fractured Lands: How the Arab World Came Apart. It’s a remarkable and magnificent piece of journalism.

On Earth Overshoot Day, Day August 8  humanity began exceeding the limits of the natural bounty our planet provides. For the rest of the year we will sink further into our debt to nature, overfishing, overharvesting, and over emitting, so much that we would need 1.6 Earths to continue supporting our species. If you’re confident that we’ll invent enough technology, or find another habitable planet, before this debt bankrupts our civilizations, then I have a bridge to sell. The Overshoot organizers suggest that each of us pledge to help. The pledges seem paltry, but we’ve got to start somewhere. They are (and I chose the first):

I host a vegetarian dinner party
I lower my household energy consumption
Is my country an ecological creditor or debtor? I become a natural resource expert
I pick a day to telecommute or use other transportation than my car
I illustrate my commitment to tread lightly on the Earth
I reduce my paper waste 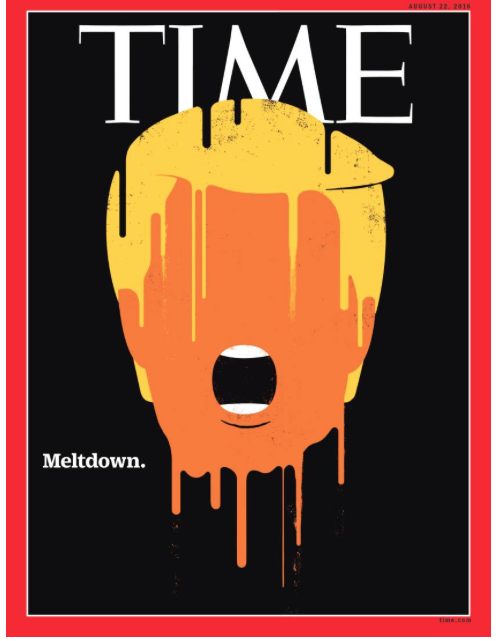 I, for one, can no longer bear to read news about the unspeakable man who would be president, or the horror show of American politics. I don’t recommend any who don’t need to do so, for sanity’s sake. But, my gawd, look at Time’s cover this week. Even without reading the story, Inside Donald Trump’s Meltdown, the image says all, about the former democracy and its grotesque politician both.

Perhaps America’s remaining good is as an object lesson, for those places where democracy still has promise. Its meltdown shows us why civility, intelligence, education, respect and tolerance for other opinions matter.