A tragedy looms on the horizon, warns Mark Carney, one of the world’s most influential central bankers. “Our societies face a series of profound environmental and social challenges,” he said in a speech to Lloyd’s of London. “The combination of the weight of scientific evidence and the dynamics of the financial system suggest that, in the fullness of time, climate change will threaten financial resilience and longer-term prosperity. While there is still time to act, the window of opportunity is finite and shrinking.” With permission, F&O  publishes an excerpt of the speech.

By Mark Carney, Governor of the Bank of England
October, 2015

There is a growing international consensus that climate change is unequivocal.

Many of the changes in our world since the 1950s are without precedent: not merely over decades but over millennia.

Research tells us with a high degree of confidence that:

Evidence is mounting of man’s role in climate change. Human drivers are judged extremely likely to have been the dominant cause of global warming since the mid-20th century. While natural fluctuations may mask it temporarily, the underlying human-induced warming trend of two-tenths of a degree per decade has continued unabated since the 1970s.

While there is always room for scientific disagreement about climate change (as there is with any scientific issue) I have found that insurers are amongst the most determined advocates for tackling it sooner rather than later. And little wonder. While others have been debating the theory, you have been dealing with the reality:  Since the 1980s the number of registered weather-related loss events has tripled; and inflation-adjusted insurance losses from these events have increased from an annual average of around $10bn in the 1980s to around $50bn over the past decade.

The challenges currently posed by climate change pale in significance compared with what might come. The far-sighted amongst you are anticipating broader global impacts on property, migration and political stability, as well as food and water security.

So why isn’t more being done to address it?

A classic problem in environmental economics is the tragedy of the commons. The solution to it lies in property rights and supply management.

Climate change is the Tragedy of the Horizon.

We don’t need an army of actuaries to tell us that the catastrophic impacts of climate change will be felt beyond the traditional horizons of most actors – imposing a cost on future generations that the current generation has no direct incentive to fix.

The horizon for monetary policy extends out to 2-3 years. For financial stability it is a bit longer, but typically only to the outer boundaries of the credit cycle – about a decade.

In other words, once climate change becomes a defining issue for financial stability, it may already be too late. This paradox is deeper, as Lord Stern and others have amply demonstrated. As risks are a function of cumulative emissions, earlier action will mean less costly adjustment.

The desirability of restricting climate change to two degrees above pre-industrial levels leads to the notion of a carbon ‘budget’, an assessment of the amount of emissions the world can ‘afford’.

Such a budget – like the one produced by the IPCC – highlights the consequences of inaction today for the scale of reaction required tomorrow.

These actions will be influenced by policy choices that are rightly the responsibility of elected governments, advised by scientific experts. In ten weeks representatives of 196 countries will gather in Paris at the COP21 summit to consider the world’s response to climate change. It is governments who must choose whether, and how, to pursue that two degree world.

And the role of finance? Earlier this year, G20 Finance Ministers asked the Financial Stability Board to consider how the financial sector could take account of the risks climate change poses to our financial system.

As Chair of the FSB I hosted a meeting last week where the private and public sectors discussed the current and prospective financial stability risks from climate change and what might be done to mitigate them.

I want to share some thoughts on the way forward after providing some context beginning with lessons from the insurance sector.

There are three broad channels through which climate change can affect financial stability:

– First, physical risks: the impacts today on insurance liabilities and the value of financial assets that arise from climate- and weather-related events, such as floods and storms that damage property or disrupt trade;

– Second, liability risks: the impacts that could arise tomorrow if parties who have suffered loss or damage from the effects of climate change seek compensation from those they hold responsible. Such claims could come decades in the future, but have the potential to hit carbon extractors and emitters – and, if they have liability cover, their insurers – the hardest;

– Finally, transition risks: the financial risks which could result from the process of adjustment towards a lower-carbon economy. Changes in policy, technology and physical risks could prompt a reassessment of the value of a large range of assets as costs and opportunities become apparent.

The speed at which such re-pricing occurs is uncertain and could be decisive for financial stability. There have already been a few high profile examples of jump-to-distress pricing because of shifts in environmental policy or performance.

Risks to financial stability will be minimised if the transition begins early and follows a predictable path, thereby helping the market anticipate the transition to a two degree world.

Mark Carney’s full speech, with references, is here on the Bank of England site.

Wikipedia page for The Stern Review of the Economic Effects of Climate Change (2006). 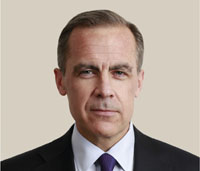