Why the United States is a perilous country for a young man, black or white 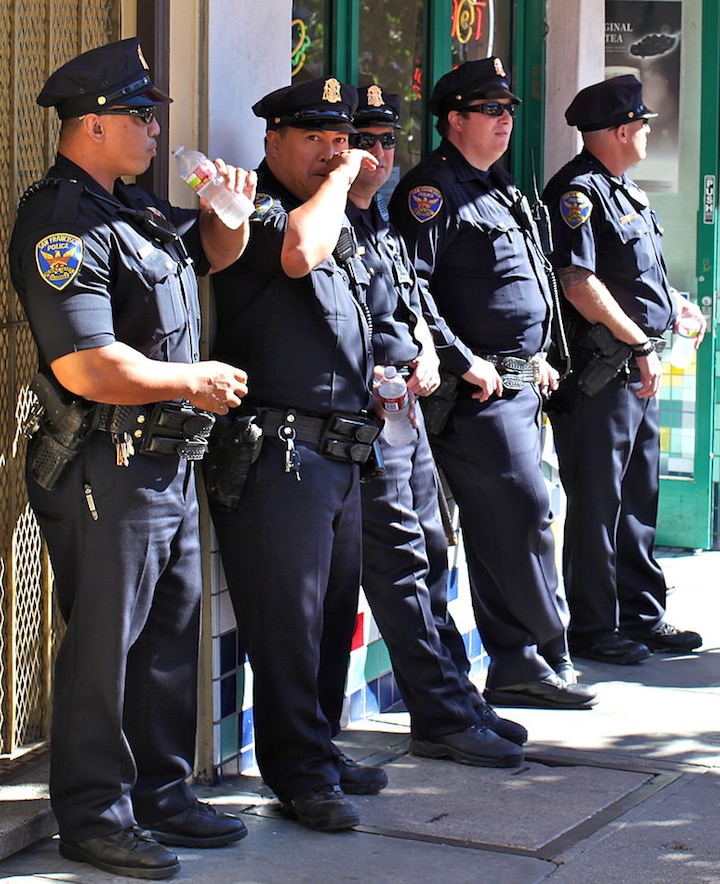 Armed and dangerous, in the right circumstances, these members of the San Francisco Police Department were photographed in 2012. Wikimedia Commons

The racial problem is an obvious one. The whole idea of a post-racial America that resulted from the election of Barack Obama to the presidency is a joke. While it is significant that millions of Americans voted for a black man, the reality is that millions of others voted against him for the same reason. The ongoing racial attacks on President Obama by Republican and Tea Party members and legislators since his election in 2008 is well documented.

There’s no need to go deeper into the racial issue because it is so obvious it needs no comment, even by those who want to deny it exists. African-Americans face discrimination in almost every aspect of life in the United States. One place where this racism shows through is during any interaction with America’s police departments.

I recently heard John Ameachi, who played in the NBA for seven years (and later became a well-known educator and writer and was awarded the Order of the British Empire) talk about his experiences when he moved to the U.S. from the United Kingdom to play basketball at a high school in Ohio.

His new teammates took him aside to tell him the rules of being a black in that state. Basically it was a guide to not being hassled, or shot, by the police for no other reason then you are a young black man.

But the problem with the police goes far beyond a racial one. Police departments across America are arming themselves to the teeth with military-grade weapons and are basically unaccountable to anyone but themselves.

Although the federal government says it keeps no statistics on police killings in the country, an absence that is staggering in itself, several groups have taken up the challenge in recent years to document these incidents.

According their statistics, more than 1,000 people a year are killed in the United States during a confrontation of some kind with the police. And of that number some 80 to 85 per cent are questionable in some way.

And yet despite this sobering revelation, very, very few police officers are ever charged with any kind of a crime or receive any kind of a suspension or even a mild reprimand.

Michael Bell, a retired U.S. Air Force officer and father of a young man killed by police in Wisconsin, campaigned and succeeded in getting Wisconsin to pass a law that mandated that all police shootings would be investigated by an outside group, and not by police themselves.

In an article on Politico, Bell succinctly outlines the problem:

“Yes, there is good reason to think that many of these unjustifiable homicides by police across the country are racially motivated. But there is a lot more than that going on here.

“Our country is simply not paying enough attention to the terrible lack of accountability of police departments and the way it affects all of us — regardless of race or ethnicity.

“Because if a blond-haired, blue-eyed boy — that was my son, Michael — can be shot in the head under a street light with his hands cuffed behind his back, in front of five eyewitnesses (including his mother and sister), and his father was a retired Air Force lieutenant colonel who flew in three wars for his country — that’s me — and I still couldn’t get anything done about it, then Joe the plumber and Javier the roofer aren’t going to be able to do anything about it either.”

But there is a third factor that at play here that almost no one in the media has talked about. And that is the role of the National Rifle Association and its continuing efforts to arm every American that it can. (I recently saw a cartoon by Michael Luckovich of the Atlanta Journal-Constitution that perfectly illustrates the situation. It showed a map of America with people shooting each other in every corner of the country, and across the pond in Iraq, a member of ISIS saying to another member “No need to attack America.”)

All 50 states have laws that allow people to carry a concealed weapon in a variety of situations. More than half have open-carry laws, or laws that permit an individual to carry a firearm openly in public.

Eleven of the open-carry states don’t require individuals to get a permit to carry openly. Thirteen others require a licence or some other permit.

So imagine you’re a police officer. You already have an institutional (if not personal) bias against African-Americans. And you also have to deal with the fact that your state may have a law that means that anybody can be carrying a gun at any time. This unlimited supply of weapons means that police are almost always going to think their life is in danger, in every situation.

And when you add in the first two factors of racism and lack of accountability, this means that more and more young African-Americans (and Americans in general) are going to die as a result of some kind of interaction with an American police officer.

Editor’s note: Michael Bell was killed in a U.S. state which allows individuals to carry firearms openly, and without a licence or permit. Here’s an electronic map of open and concealed America, state by state:

Tom Regan is the author of F&O‘s Summoning Orenda column.