Why the ‘American people’ do not exist 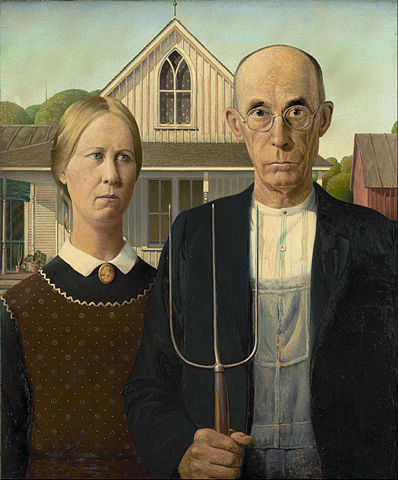 ‘The American people’ do not exist, writes Tom Regan. “They are as much of a myth as Sasquatch, Area 51, Nigerian yellow cake, and the Tooth Fairy.” “Grant Wood – American Gothic – Google Art Project” by Grant Wood. Creative Commons

It’s wacky season in Washington once again. Wacky season comes in two flavors in the nation’s capitol: during the summer, when all the politicos would rather be jetting to a prime vacation spot on the private jet of a fat cat corporate sponsor, and when it’s time to start running for president.

That’s because ‘the American people’ do not exist in the way that these voices want us to believe. They are as much of a myth as Sasquatch, Area 51, Nigerian yellow cake, and the Tooth Fairy

The notion of ‘the American people’ to some degree comes from the also fictitious idea of America being a great melting pot. But it goes beyond that. The phrase, which tumbles so easily from the mouths of politicians and talking heads on cable news channels, refers to a huge monolithic entity – THE AMERICAN PEOPLE! They all think the same, support the same policies, worry about the same problems, and see the world in exactly the same way.

Americans can barely agree about the time of day let alone significant political programs, initiatives and challenges. The idea that they could do so in the current political context is ludicrous. Instead, ‘the American people’ are actually a number of groups. For instance, when conservative Republicans like Sen. Ted Cruz say it, they mean white, fundamentalist Christians males (this is the same group they mean when they use the word ‘patriots’). When someone like Democratic Sen. Chuck Schumer says it, it means progressives, African-Americans, working single women, growing numbers of Hispanics, and liberal Jews. The last time you could truly speak of ‘the American people’ as a whole was in the first few weeks after 9/11. And even then, it didn’t last too long.

Its time we dumped the phrase – and only use it when talking about census results – as well as the melting pot idea. America is NOT some kind of big monolith. You could even argue that the idea of ‘the American people’ runs contrary to the individualist mythology of the country.

America is a noisy, messy, unruly mass, made up of people who see themselves as Americans, but not always first and foremost. And its been that way for many decades. New immigrants to the country retain strong ties to their native land’s politics, religion and culture. They tend to congregate in neighborhoods where they find other who come from the same background. In a new land, it provides a measure of comfort.

But even groups who’ve been here for generations are not a political or cultural monolith. While the mainstream media and the Beltway mandarins focus solely on the two main political parties, there are in fact a multitude of political parties and culture views that, in the age of the Internet and social media, are on view pretty much all the time.

In fact, this political and cultural diversity is one of the best thing about the country. America is not a melting pot, but it is constantly changing, evolving, two steps forward, one step back. And by the time we hit 2050, the country will look, and maybe think, considerably differently than it does now. And this is in fact the secret to America. It is not static. It’s not one big ‘group think.’

So the next time you hear a politician or a commentator talk about the American people, please remember, they are never, ever talking about everybody. It’s just a phrase, full of political nonsense, signifying nothing.