Why Putin Fears a President Clinton 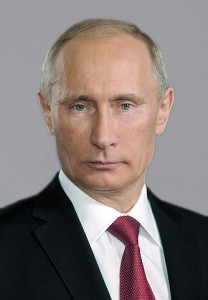 For all of his and his lackeys’ denials, there seems little doubt that the hacking of emails from the U.S. Democratic National Committee, and Clinton advisor John Podesta, was carried out by Russians under the orders of Russian President Vladimir Putin.

As if the US needed more evidence that Mr. Putin wants to sway the election in favor of Republican candidate Donald Trump, there is this week’s statement by a longtime Putin ally –  known for voicing radical opinions to test reactions for Putin – that if Trump is not elected, there will be nuclear war.

“Relations between Russia and the United States can’t get any worse. The only way they can get worse is if a war starts,” Vladimir Zhirinovsky told a reporter from Reuters in his office on the 10th floor of Russia’s State Duma, or lower house of parliament.

To quote my grandfather, horse hockey.

Yes, things are bad between the two countries at the moment, primarily over Syria and the Ukraine. The email hacking, and attempts to disrupt American voting systems, don’t help. But Putin is trying to take advantage of the space left by the end of one administration and the beginning of another to create as much chaos as he can. Creating chaos is the one thing he can do effectively, because the truth is that Russia is not the military power Putin boasts about, and he knows it.

So why work so hard to elect Trump? There are several theories.

But I believe there is another reason that Putin wants Trump to win. He’s terrified of Clinton.

Clinton has shown little inclination to buy into the PR machine that is the ego of Vladimir Putin, such as his bare-chested bear-fighting calendars and his scoring multiple goals while playing against seasoned Russian hockey stars. It’s easy to see that Clinton sees it all for the baloney that it is. Clinton is also not some newbie on the world stage. As secretary of state, she has clashed with Putin before and has a much better measure of him than does Trump, who barely takes time to learn about anything that is not about him.

No doubt the idea was that by giving hacked emails to WikiLeaks and its founder Julian Assange, who hates Clinton for entirely different reasons, the Russians would help kill Clinton’s candidacy. But Putin didn’t count on two things.

First, the emails are not all that damaging. They are more the “inside’ baseball of the Clinton campaign. Time magazine’s Joe Klein, no friend of the Clintons and author of  the book Primary Colors, a fictionalized account of her husband Bill’s presidential campaign, said the mail shows her to be, well, a normal politician, which he wrote was “reassuring in this crazy election.”

A Washington Post editorial (and remember the Post’s opinion and editorial section is moderately conservative) wrote that the leaked emails showed her to be (gasp!) “reasonable.”

But even Putin could not know that Donald Trump’s past indiscretions and alleged sexual assaults would blow up to swamp coverage of every other issue. Even if the leaks had been truly bad for the Clinton campaign, it is doubtful that most people, other than Trump’s true believers, paid any solid attention. As each new woman comes forward to allege that Trump sexually assaulted her, the hacked emails retreat farther and farther into the background noise of the campaign.

In the end, Putin will have to deal with Clinton. And it’s my guess that after all he’s done to do in her candidacy, she won’t be in a mood to fool around with Russia.

Clinton won’t be stupid – her advocacy of a no-fly zone in Syria was done more to spook Putin than to actually institute one – but she will be tough. Putin will have to face the fact that he won’t get want he wants as easily as he thought he could.