Why I fear Americans more than terrorists

Even if Paris had a terrorist death toll similar to the Paris attacks every week for a year, 130 people, it would still not match the number of deaths by firearms in a year in the US.

A true story of living in a country overwhelmed with firearms, and how it constantly leads to you imagine the worst.

About a month ago, I went to see the movie Zootopia with my family in Frederick, Maryland. We like to sit close to the screen, so we planted ourselves about six or seven rows back. I noticed a tall young man sitting in the very front row, but didn’t think much about it at first. As the pre-show features came to an end, that changed.

The young man stood up. He reached down for a backpack. I sat up straight in my seat. Suddenly my heart was in my throat. In America, young white male gunmen like to slaughter people in movie houses. My mind raced. How could I get my family out of the line of fire? Should a yell a warning to the rest of the theater, or would that just make us his first targets? For a moment, I felt unimaginable terror.

Then the young man put on his backpack and walked out of the theatre. I have no idea why he left so early. My son said he was homeless and probably had enough money to buy a ticket and take a break from the cold outside.

That moment has stayed with me, for weeks. I’d like to say my fear was baseless, but I know it wasn’t. The reality of life in America is that being killed by a gun in a movie theater … or a school, or a church, or at a party, or even driving in your car … is very much a fear that everyone in this country must face. 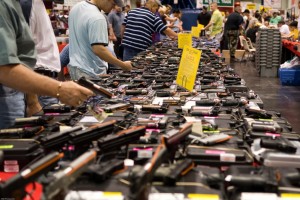 Even in countries that struggle with terrorism it’s not what it seems to be. Daniel Kahneman, the Nobel prize winning economist and author of “Thinking, Fast and Slow” (a great book) is quoted in a Washington Post article that “even in countries that have been targets of intensive terror campaigns, such as Israel, the weekly number of casualties almost never [comes] close to the number of traffic deaths.”

Meanwhile, the odds of being killed by a gun are about 30,000 to one. If you live in a qood neighborhood, the odds can rise to 150,000 to one. Which doesn’t seem bad until you compare it to the terrorist stats. Basically an American is 133 times more likely to be killed by a gun in the US than you are to die in a terrorist attack. Think about that – 133 times more likely. And that’s a rough estimate.

Let’s look at it another way. In the US, the rate of being killed by a firearm is 31 per million. That is very similar to the number of Americans killed in single car accidents. In Japan, the murder rate is one in ten million. In Germany, it’s two in a million, which is the same rate at which Americans die of hypothermia each year. An American is 10 times more likely to be killed by a police officer than by a terrorist.

Even if Paris had a terrorist death toll similar to the Paris attacks every week for a year, 130 people, it would still not match the number of deaths by firearms in a year in the US.

Death by a firearm is the tenth most common cause of death in the US, by some estimates. Terrorism is so low I couldn’t even find a ranking for it.

Now I’m not stupid. I understand why people fear terrorism. It’s the right word – terror. And when a terrorist attack happens, the media descend on it like a pack of sharks with chum in the water. I don’t blame them for that – it’s their job. The problem is, few ever seem to put it in perspective. When a terrorist attack happens few point out how rare terrorist attacks are (at least in the Western world – in Iraq or Syria or Afghanistan they’re a daily occurrence.) The main message of most reporting is, “Be afraid, be very afraid.” In reality the message should be that we need to be vigilant, NOT afraid.

When there is another mass shooting, much of the media’s message is completely different: “It’s too bad, but we all know nothing is going to change. So we’ll just move along until the next one happens,” as it always does.

That’s why I fear my fellow Americans WAY more than I fear any terrorist. For too many Americans, daily violence is just an accepted way of life. And thanks to the National Rifle Association and politicians afraid to confront America’s organized death machine, your chances of being caught up in that daily violence are much greater than dying in a rare act of terrorism.

This story has been updated to correct the time frame cited in the comparison between Americans killed annually by guns and the number who died in the Paris attacks.

In Other Countries, You’re as Likely to Be Killed by a Falling Object as by a Gun, New York Times http://www.nytimes.com/2015/12/05/upshot/in-other-countries-youre-as-likely-to-be-killed-by-a-falling-object-as-a-gun.html

How scared should you be of terrorism? http://reason.com/archives/2011/09/06/how-scared-of-terrorism-should

The Dunblane massacre at 20: how Britain rewrote gun laws, by Peter Squires, Report

In the 20 years since the 1996 Dunblane massacre, a great deal has been learned about preventing gun violence in the UK.