The Trumping of Rationality

For many years, economists, philosophers and pundits thought that people would always act in their own best interests – in other words, rationally.

The idea was that, when making a decision, people would look at options and the information available to make rational choices. But in the mid-70s, two Israeli psychologists – Daniel Kahneman and Amos Tversky – turned that idea on its head. 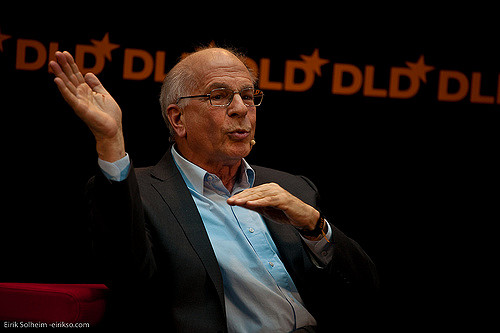 Psychologist Daniel Kahneman, winner of the 2002 Nobel Prize in economics, in 2009. Photo by Eirik Solheim/Flickr/Creative Commons

What the two men showed, through experiments that found their way into some of the most-cited papers in the field of psychology AND economics, was that when faced with a decision in a period of uncertainty people often made irrational decisions. They did not necessarily make the decision that was best for them, but were instead influenced by availability, confirmation bias, and what Kahneman and Tversky called “representativeness.”

Author Michael Lewis described this in his recent book about their findings, The Undoing Project, as “the similarity between whatever people were judging and some model they have in their mind of that thing.”

Which brings us to the election of American president Donald Trump, and why celebrity and brand now matter more than substance.

On the surface, the choice between Democratic nominee Hilary Clinton and Trump was quite clear, particularly if you were a older white male making a ‘rational’ decision. Clinton had the experience, was strong on foreign policy, had the knowledge of how government works, and supported plans that were largely favorable to older white men  – including the unemployed, who had no healthcare without Obamacare. (Trade was the one main area that she could be attacked on rationally.)

When compared to Trump in other areas – such as questionable ties to personal foundations, business conflicts of interest, ties to Wall Street – there was really little difference.

But Clinton had several other advantages, such as the possibility of becoming the first woman president, and the support of the entire Democratic establishment after the end of the primaries.

So why did Trump win?

Two reasons, one already well-known- the Wikileaks-Russian email leaks and the Russian fake news campaign designed to damage Clinton on on every level. But a second reason, I think, tells us more about the future of where politics is headed in the US: the dawn of the celebrity presidency.

Now it might be argued that Ronald Reagan was the first celebrity president. But Reagan had been governor of a state larger than most countries in the world, the head of a union (the Screen Actors Guild), and had been active in Republican politics for many years. Trump had none of these attributes. He had only his celebrity. Period. True, he is wealthy, but his history as a businessman is mixed with as many bankruptcies and product failures as successes.

Over the years, Trump crafted an image of a winner, whether or not that was accurate. He cultivated the media in New York with tales of business and sexual prowess. He had years as the host of a TV show that portrayed him as a dynamic business leader, not afraid to do what was needed, to be heartless when it was called for. He created a model in people’s minds, and that it was largely inaccurate and certainly incomplete that didn’t matter. The model was strong.

The model was why people were so willing to overlook the racist, misogynist, bigoted (and perverted) comments he made during the campaign. This is most true of Christian evangelicals. The real Trump is the total opposite of what evangelicals said they wanted: he rarely if ever attended church, was married three times, cheated on two wives, and was not involved in promoting their evangelical agenda in any real way. But in their desperation to defeat the Democrats, evangelicals created a model of Trump in their minds that represented all the things he was not.

They wanted the model that seemed to them the closest to how they saw a dynamic leader, not the one that was probably the rational choice for their very real problems. The question of who would be the best person to govern the country was not their key consideration. The Trump model was one they knew well, and when push came to shove, it was the one enough people voted for to let him win the electoral college.

As author Lewis put it in a 2011 Vanity Fair article: “The human mind is so wedded to stereotypes and so distracted by vivid descriptions that it will seize upon them, even when they defy logic, rather than upon truly relevant facts.”

Stereotypes and vivid descriptions. That, in a nutshell, is Donald Trump

The other day, a friend commented that American celebrity Kim Kardashian could probably be elected American president. It wasn’t funny. She’s already known by millions of people who follow her every whim and fancy. Her sex tape background only gives her more coin of the realm in a world dominated by Facebook, Twitter, SnapChat and Instagram.

Working your way up through the party structure is no longer the way to succeed in politics; instead, shine on TV and social media.

Experience in government or international affairs is no longer needed. Instead, be outrageous. Become well-known. Create a model in people’s minds you want them to see. And, who knows, people might irrationally vote for you one day, too.

Donald Trump will lose the United States presidential election in November, but the curse of Pandora is now out of the box and the age of the collapse of the American Imperium is upon us.

There would be a delicious irony if Japan were driven out of the arms of Donald Trump, and into the arms of  Vladimir Putin because of Shinzo Abe’s suspicions about the reliability of the man who U.S. intelligence agencies unanimously believe was helped into the Oval Office by Putin’s spy agencies.

I Stole It Fair and Square, by Jim McNiven

Michael Lewis’ latest book,Flash Boys, is the 21st Century version of the story of those British financiers who lost out to Nathan Rothschild in 1814, and of their attempts to figure out how Rothschild did it. Today, semaphores and carrier pigeons have been replaced with fiber optic cables and microwave towers. There is nothing illegal in getting to the market microseconds ahead of the other guy by using up-to-date technology. And yet, in the aftermath of the trauma of the crash of 2008, the unethical and the illegal easily flow together, especially when the risk is of another crash.