The State of Indiana chooses hatred 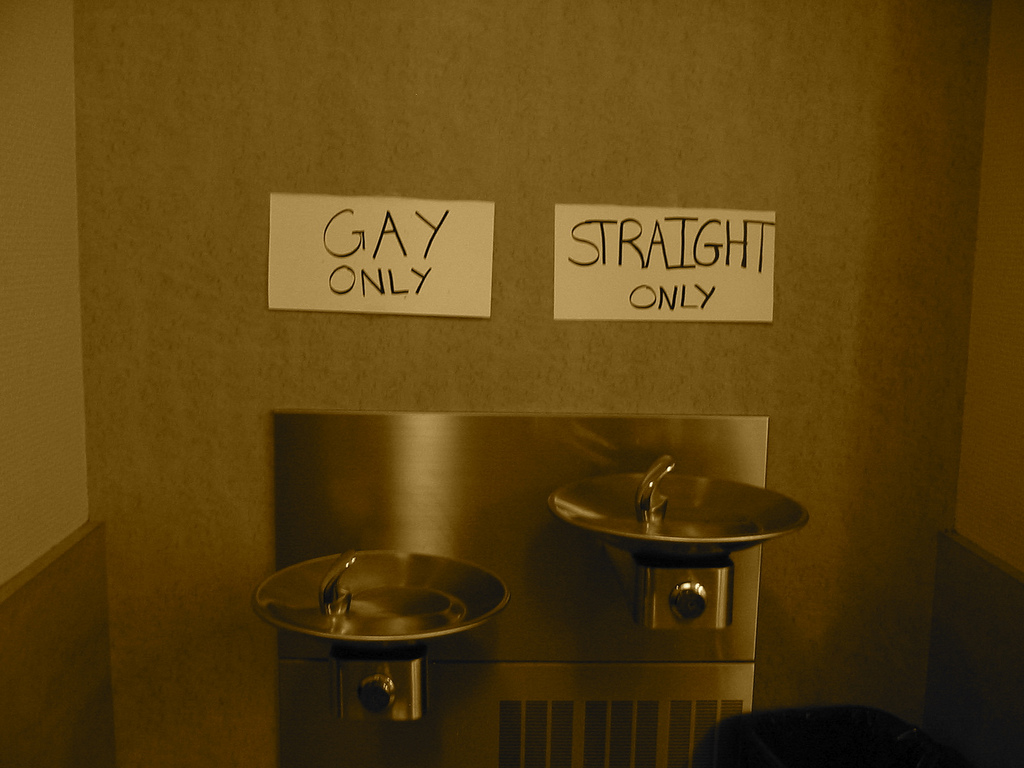 Supporters of the US state of Indiana’s new law call it a religious freedom bill, but is actually nothing of the sort.

It’s actually a bill that celebrates religious bigotry. The only freedom it really offers is the freedom to exercise hatred toward other individuals who are different than you or who believe something different than you do. It is fundamentally un-American, probably un-Constitutional, and certainly immoral. It’s a bill that gives official government blessing for right-wing conservative religious fundamentalists to practice official government sanctioned bigotry against homosexuals.

“There has been a lot of misunderstanding about this bill,” Indiana Governor Mike Pence said. “This bill is not about discrimination, and if I thought it legalized discrimination in any way I would’ve vetoed it.”

Pardon me for saying so, Governor Pence, but that’s enough horse manure to fertilize every farm in your state. Pretending that a bill that reeks of discrimination isn’t discrimination just because you say so, is like claiming the weather’s fine when you’re running from a tornado.

But the new Indiana law, and 19 other similar bills in other right-wing Christian-controlled state legislatures, do illustrate a real danger that America faces. America is in danger from a wave of religious fundamentalism.

These days one is encouraged by politicians and the media to think of Islamic fundamentalism when you hear that kind of statement. And while this is certainly a genuine concern in some ways, the reality is that since 9/11 it’s become very difficult for anyone to carry out the kind of mass destruction we saw on that day. The fears now have shifted to the lone wolf, or wolves, like the two Boston brothers who detonated bombs at the 2012 Boston Marathon. And while awful, this religious fundamentalism was never a danger to the principles and ideals of America itself.

No, the religious fundamentalism that threatens to undermine American democracy has nothing to do with sharia law. It is Christian right-wing religious fundamentalism that threatens to destroy numerous important freedoms because they believe “Jesus” wants them to do it. It is a kind of virus that seeks to remove everything that doesn’t conform to its vision of the world. At the current moment, it’s not as violent as the kind of fundamentalism one can find in Islam, or Hinduism, or Buddhism. But that doesn’t mean it’s any less virulent or openly antagonistic towards those who question its beliefs.

It’s important to note here that Christianity itself is not the problem – it is a particular branch of Christianity, one that believes it is the only one that has all the answers, and disparages all other forms of religious belief including those that fall within its own sphere. There are many denominations of Christianity that have opened their hearts to gays and lesbians, and there are many, many other Christians who respect those of different beliefs and religious traditions, or those who have none at all.

But not the fundamentalists.

There are numerous groups in the United States who stated raison d’être is to return America to its so-called “Christian roots” (which decoded means Christian right-wing fundamentalist roots, roots that America actually never had). What “Christian roots” mean is a male-dominated, white, anti-gay, anti-immigrant, anti-black, anti-labour, anti-science, anti-everything America that bullies the rest of the world while it waits for the “Rapture.”

You can find a fairly long listing of these religious hate groups at places like the Southern Poverty Law Center, or Americans United for Separation of Church and State.

Meanwhile, right-wing Christian colleges like Patrick Henry or Liberty University or Bob Jones University, to name a few of the better known ones, openly acknowledged that their mission is to return America to this racist, bigoted, homophobic far-right Christian vision that titillates them in their dreams at night.

In many ways these far-right Christians are little different from the fundamentalist imams that they rail against in Islam. The phrases they use may be different, as are the books they love to quote from, but their intent is the same, as is their vision of the world: Our way or the highway.

The story of America is one of diversity, acceptance (often over many years, but acceptance none the less) and long-fought-for freedoms. Fundamentalist far-right Christianity of the kind practiced by supporters of the Indiana hate bill would roll these gains back. The America these followers seek has actually never existed. And those of us who see the danger here must make sure politically they never get the chance to create it.