If you want to know why Donald Trump continues to lead the Republican presidential contest, you don’t need to understand Trump as much as you do the people who are supporting him. And if you’re going to do that, you need to understand the way they process information and facts.

Many years ago, I read a very interesting comment from a scholar at the American Enterprise Institute. Now AEI scholars and I don’t exactly see eye to eye on many issues, but this one resonated with me. The scholar in question was addressing a room full of journalists and was trying to explain to them how they could report a story one way, but people would interpret it completely differently. 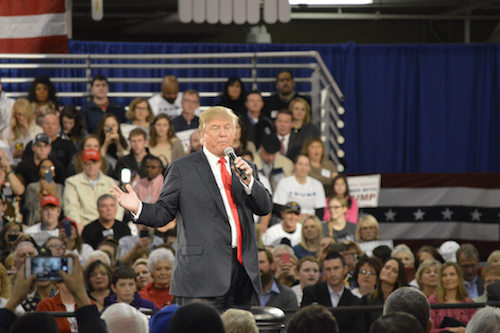 In 2009, research by Don Moore of Carnegie Mellon University in Pittsburgh showed that people preferred advice or information from a confident or “cocky’ source, over a knowledgeable one, even if the confident source has a bad track record of giving advice.

In another series of tests in 2005 and 2006, researchers at the University of Michigan found that when political partisans are given facts and information that corrects misinformation, it does not actually change their minds but instead reinforces the misinformation.

“The general idea is that it’s absolutely threatening to admit you’re wrong,” political scientist Brendan Nyhan, the lead researcher on the Michigan study, told the Boston Globe in 2010. This reaction is “a natural defense mechanism to avoid that cognitive dissonance.”

Beliefs don’t get along well with facts. Most people tend to twist facts to suit their own beliefs, and this is true of those on the right and on the left. People will withdraw into the “truths” they’ve selected based on their beliefs, and this is especially true when people feel their way of life is threatened.

This brings us to the people who support Donald Trump. It would be a mistake to think that the only reason they do so is because they are, like he is, bigoted and racist. While that is certainly true of many (witness the robocalls made on his behalf in Iowa by a white supremacist group, support that Trump has made no effect to renounce), it does not tell the story of all.

A study done by the Hoover Institute, and quoted by the BBC, “found that more than half of Trump-backers are female. About a third are over the age of 65. Only 2% are younger than 30. Half of his voters have a high-school diploma, but just 19% have a college degree. Just over a third earn less than $50,000, while 11% make six figures or more.”

If you wanted to draw a picture of the group of people who feel the most threatened by the progressive changes in American society, it would look very much like a group of Trump supporters.

For this group in particular, the key question is, “Can you exist in a world where your ‘truth’, what you’ve based your whole life on and around, might not be exactly true anymore?”

Trump attracts them because he tells them their truth is still true. That the solution to the complex problems of the day are simple – he knows “guys” who can fix them. That he’ll make America great again by bringing jobs back from China and Mexico, and bombing ISIS out of existence, and keeping all those illegal people out of the country.

To put it in a more 2016 context, he promises them to restore a meme (or a set of beliefs) that date back to before the 60s.

Women and minorities knew their place. Illegal immigration was unheard of. Men all had good jobs. Everybody believed in the same God. Or at least the same version. Kids respected their parents. Terrorism was a word that kids learned about in college when studying European history. America was the most powerful nation in the world. And did I mention jobs? There were lots of good jobs.

Now, that meme didn’t exist even back then, but that doesn’t matter. It’s the idealized meme that all true Trump supporters hold in their hearts. It’s more than just confirmation bias. It’s what they’ve based their core beliefs around, their identity as human beings. And after a long time of seeing that identity knocked down and often ridiculed, along comes a guy – a cocky, loud guy – who tells them what they want to hear, which they translate as “he speaks his mind.” In fact, he is speaking their minds.

You see, no matter what the truth is, it goes through those cultural values, and people decide what is really ‘true” based on those beliefs. In fact, the real truth doesn’t matter at all. As the Michigan study above showed, when presented with facts that correct a piece of misinformation, people don’t go, “Oh, I was wrong, let me change my opinion.” They find a way to change the facts to fit their beliefs. (You see this most often in Christian doomsday cults who, when the day of doom passes without the end of the world, just change the date rather than admit maybe the world won’t end that way.)

So what does all this mean?

It means Donald Trump is not going away anytime soon. He may or may not win the Republican nomination. If he does, he won’t win the presidential election. While his supporters are legion in the GOP, they no longer dominate American society (which is why they support Trump in the first place).

This group, however, is not going to go away after the 2016 election. They will translate a Trump defeat into a rallying cry, that he (and their beliefs) were robbed of victory by a cabal of liberals, atheists, GOP establishment figures, minorities and the media. The facts won’t matter to them. They know better. And it’s only going to make them even angrier than they are now.