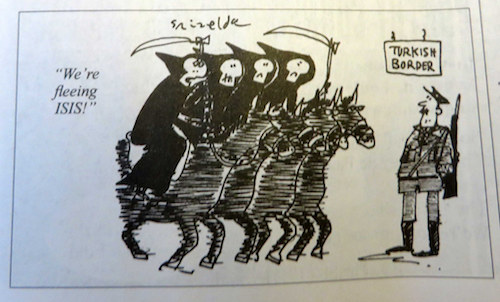 Let me tell you about my last couple of weeks at work.

When I’m not penning thought bubbles for FactsandOpinions, I’m an editor on two websites that cover the Middle East and Southeast Asia.

One story I edited recently was about a Lebanese family, tired of living near the fighting on the Lebanon-Syria border, who tried to cross the Mediterranean from Turkey to Greece in order to join the influx of refugees searching for safety and a better life in Europe. Six of the eight family members drowned after their flimsy raft started to take on water at 2 a.m. in the morning. One of the survivors, a father in his late 20s, spoke of how he tried to keep his wife alive throughout the night until she died of hypothermia in his arms. This was after he was unable to keep his children next to him, and watched them drift away to their deaths. Every time I try to think of the terror and the confusion of those hours, I have to go for a walk to deal with my emotions.

Yesterday, before Paris, I had started to talk to our assignment editor about doing a story on the bombing of the market in Beirut, where 49 mostly women and children were cut down. The first bomb targeted the women and children inside the market. When local residents rushed to see if they could help, the second explosion cut them down. And I remember wondering, how do you kill people who were coming to save others? What part of your humanity has become so twisted and lost that you don’t look at these first responders with amazement and awe at their courage, but with hatred? What part of you believes you’ll go to heaven faster if you kill kids?

A few weeks ago, I looked over photos of the ISIS bombing in Ankara where 100 people died in the same modus operandi as the later Beirut bombing – one suicide bomber explodes himself in the middle of the crowd, and when others rush in to help survivors of the first attack, the second suicide bomber detonates himself.

Do you want to know why so many Syrians are trying to escape to Europe? Let me give you some idea.

When ISIS fighters take over an area, one of the first things that they do is round up all the people they think would oppose them and kill them, often in a very public spectacle, with many of the local community residents forced to watch as they either shoot or behead their captives. ISIS will then often go from house to house and take away young girls who will be forced to “marry” ISIS fighters. Often these girls are no older than 13 or 14. ISIS will then impose its barbaric medieval code of behaviour on these communities. Anyone caught disobeying the rules can be flayed, if lucky. Sometimes they are crucified, once again in a public square as local residents are forced to watch.

So tell me, how long would you remain with your family in that kind of a situation? If you had an opportunity to escape, do you mean to tell me that you would just sit there and do nothing? Or, as in the fantasy of many right-wing conservatives in the United States, you would get out your semi-automatic Bushmaster and take a few of them down with you, a la Rambo or the Rock? And then what would happen to your family? Would they keep you alive long enough to watch them slaughter your loved ones before they finished you off?

I have many days like this. I’ve read stories and seen pictures of beheadings and crucifixions and unspeakable horrors. And I’ve been doing this for the past six years, and for many years before that, in a different way but covering the same area, at the Christian Science Monitor.

Which brings me to Paris, and what happened on the night of November 13. As in London, or in Madrid, the death toll was staggering. Once again the terrorists hit soft spots, particularly so in this case. And it is the fact that they choose these soft spots that makes the event so particularly terrifying. Which of course, is exactly what they wanted.

I find myself trying to contain a surge of anger. That anger is directed at two groups in particular: ISIS, the 21st century version of the Nazis who need to be dealt with in the same way; and those of us in the West who only seem to be able to generate emotion about these horrible events when the victims happen to people who look like us.

Because let’s face it folks, we didn’t have this kind of a reaction when the exact same thing happened in Mumbai, India. Although we were horrified for a couple of days, we didn’t change the avatars we use on Facebook to reflect solidarity with India. And a week later it was all behind us.

And if the horrible events of last night in Paris had happened in Amman or Cairo or Manama or Jakarta or Dakar, we would have barely noticed. Once again, we would’ve watched coverage on cable news for a day, maybe two and then we would’ve gotten on with our lives.

We are hypocrites in our grief. We scoff at other nations for their tribal instincts, and yet when the chips are down, we just become another tribe ourselves.

Here’s the reality of the situation.

ISIS is not going to go down easy. Even if we beat them back in Iraq and Syria, which is increasingly the case, we will be dealing with their disaffected and frustrated acolytes for years to come. We will not, however, be able to truly defeat them until the death of 100 people in Ankara, or 49 people in a market in Beirut, means the same to us as the death of 127 people in Paris. We have to move beyond the tribe.

And we won’t be able to stop the flood of refugees into Europe, and maybe into North America as well, until we give people a reason to stay in Syria, which means ending the evil of ISIS once and for all. Even if that means boots on the ground.

The choice is ours. To quote Benjamin Franklin, we either hang together or we hang separately. 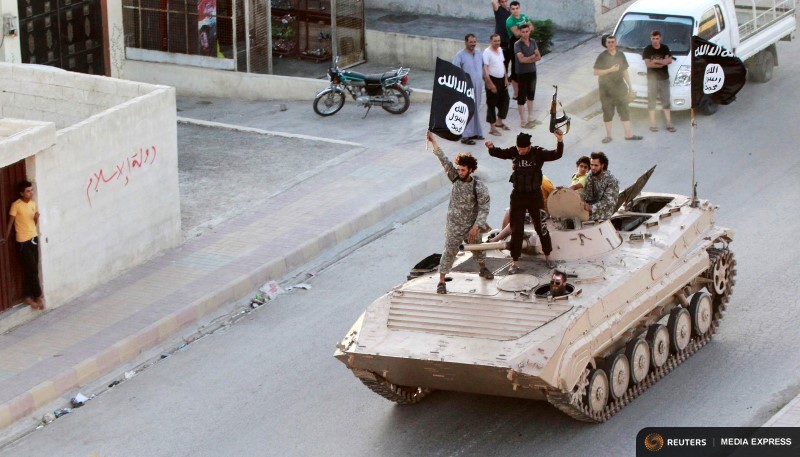 Militant Islamist fighters hold the flag of Islamic State (IS) while taking part in a military parade along the streets of northern Raqqa province in this June 30, 2014 file photo. REUTERS/Stringer