No safe place left in America — NRA to blame 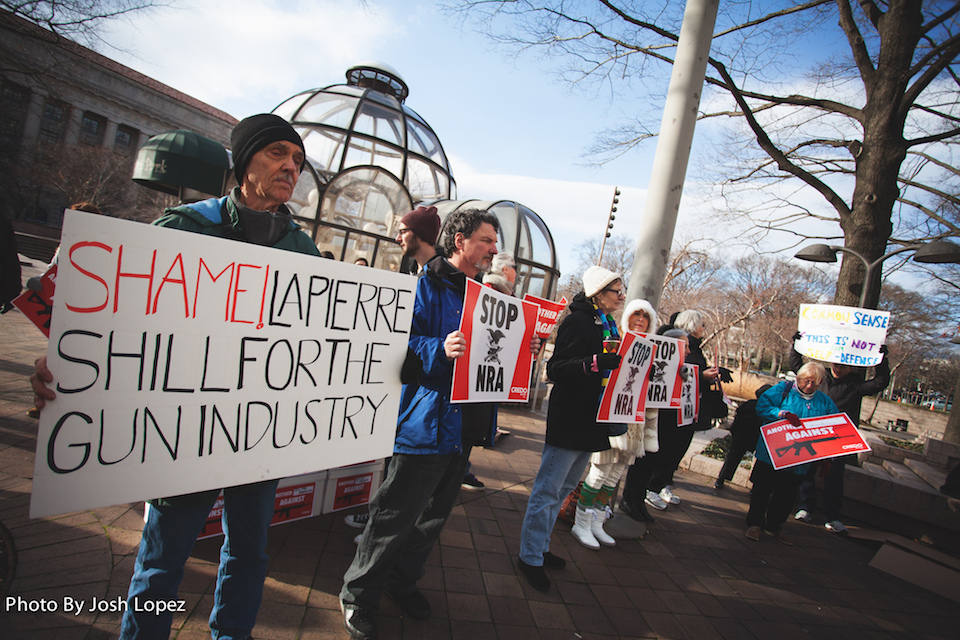 “Just another day in the United States of America, another day of gunfire, panic and fear.”

That was how the BBC began its coverage of the shootings in San Bernardino, California, which left 14 people dead and more than 20 injured.

Shootingtracker.com is a site that counts the number of mass shootings that take place in this country. It defines a mass shooting as one in which four or more people are shot, and injured or killed. So far, in 2015, there have been 350 mass shootings. That’s more than one a day.

Here’s the truth about the United States of America. There are no safe places left: not schools, not churches, not hospitals, not Christmas parties, not workplaces, not private homes, not office buildings, not public streets. Nowhere. Americans live in a war zone of gun violence. It is not as dangerous what residents of Syria and Iraq face, it is overwhelming.

You can point the finger of blame for this unbelievable toll at many individuals and organizations. But in reality it is a toxic stew of many ingredients, each perhaps harmless by itself. When all are thrown together, and stirred vigorously by the National Rifle Association and its puppet masters the gun manufacturers, and promoted unthinkingly by media, you end up with staggering statistics.

Some, including myself, previously pointed to gun regulations enacted in nations like Canada and Australia after their own mass shootings. But it’s time to forget about that. The United States is not Canada. It’s not Australia. The love of guns is so ingrained in the American culture and mythology that I daresay that trying to end it could provoke another civil war. I’m not joking.

The U.S. takes this gun-loving culture and combines it with a paranoid distrust of government (particularly among those who own multiple guns). It’s added to a society where white males in particular see themselves diminishing in power and numbers (which helps to fuel their anger at almost every minority group). Then, there’s a rising chorus of right-wing media and conservative demagogues who promote racial imbalance in an effort to gain money and power. Put all this together, and very bad things happen.

It seems to me that Americans have lost the ability to talk things out. Instead, the solution to grievances, whether on a personal or societal level, is to grab your gun and start shooting.

Are you upset at the way you’ve been treated at work? Then head to your nearest gun show, load up on semiautomatics and hundreds of rounds of ammunition, and go to your office. Tired of how you’re being treated at school? Angry at a professor who didn’t give you the mark you needed on your dissertation? Then take out your anger with a gun. Angry at someone who believes in a different cultural value than you do? Then crash into their clinic and fire at will. Face discrimination because of your religious beliefs? You don’t have to take it, you could shoot your way to paradise. Think there are too many Blacks, or Muslims, or uppity women, or Hispanics, are responsible for all the troubles in your life (because that’s what the talking heads on conservative media have told you)? You know how to deal with them.

And at the apex of this pyramid of violence stands the NRA and American gun manufacturers. Now the NRA in and of itself doesn’t shoot anyone. It’s not pulling the triggers. It is just doing everything in its power to make sure that any individuals who want to use a gun to express anger and frustration at other people or society, they can access all the weaponry and ammunition that they desire.

It’s not just that the NRA is opposed to common sense gun regulations: it actively seeks out and undermines those who propose them. Under the leadership of Wayne LaPierre, a man the New York Daily News has designated a “terrorist,” the NRA has not only pushed to put guns in every possible place in America, including churches and schools – and bars – it has helped to promote laws like Stand Your Ground in Florida and Texas that encourage people to settle disputes with guns.

Perhaps the most egregious example of this was the man who murdered another man in a movie theater when he didn’t stop looking at his cell phone prior to the start of the movie. The shooter immediately claimed Stand Your Ground as a defense, because he said he felt threatened when he and the other man were arguing.

The NRA claims to promote its position based on its belief in the Second Amendment, but in reality it is helping its corporate masters, the gun manufacturers, make staggering profits. It is unrepentant in its venal motives and does not hesitate to try to spend or bribe its way to victory over anyproposed law that would restrict its agenda.

And here’s the kicker. The NRA can count on the support of the American public as it marches on. Scared to death by the overwhelming number of shootings, whipped into a frenzy by conservative media that promotes hatred and gun ownership, and fueled by mythology that says you can’t be an American without a gun, I can promise you that nothing, nothing will happen to change these grim outcomes.

Think I’m wrong? Gun stores all across America reported increased sales on Black Friday and after the San Bernardino shooting – as if someone with a handgun could take down two shooters armed with semi-automatic weapons. That is the world of the NRA has created in America.

You want to feel safe? Don’t press your politicians to come up with real long-term solutions, don’t try to find a way to help include those who feel alienated, don’t look at a long-term strategy towards possible acts of terrorism that might actually work. No. Just buy a gun. You’ll make Wayne LaPierre’s day.