Newspapers their own worst enemy in battle to survive 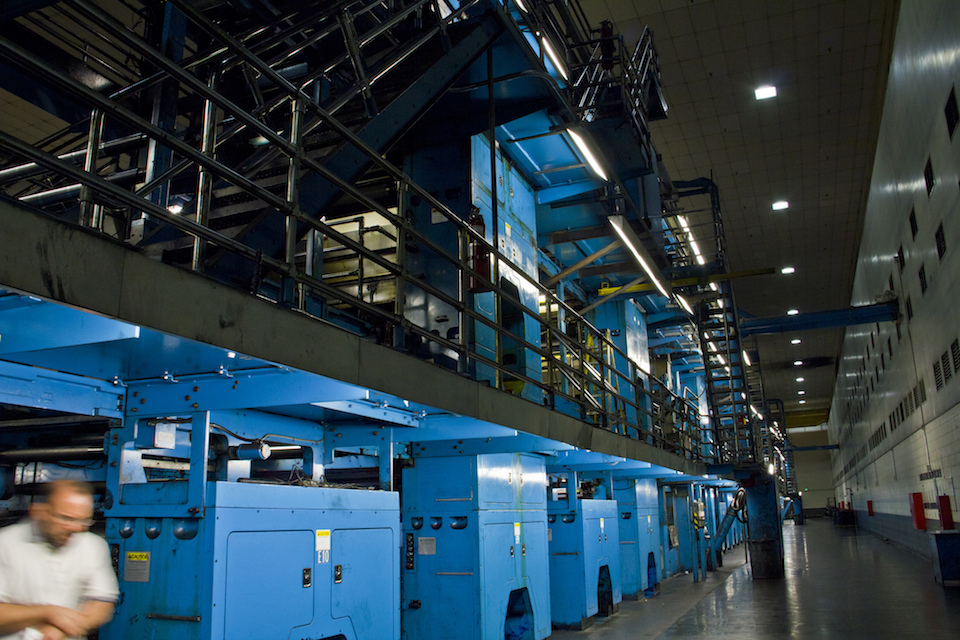 Six units of Goss Colorliner presses print up to 96-page newspapers at a rate of up to 70,000 newspapers an hour. Photo: Neon Tommy

From as early as I can remember my mother told me she knew that I was going to be a journalist. One day, many years later, I asked her how she knew.

“That’s easy,” she said to me. “The black smudge mark on the end of your nose.”

Ah yes, the smudge mark. I loved the smell of newspapers. Ink on paper. Many days when the paper came to our house I would bury my face in between the pages and take a deep sniff.

In later years when I actually became a journalist, I would often sneak down to the press room and watch the papers roll off the presses. I loved the sound the machines made as they readied that day’s news for the people who would buy our paper. And it didn’t matter if I was working for a small paper in Nova Scotia, Canada, or when I worked on the weekends at the Boston Globe. I always found some reason to make my way down to the presses and just stand there for a few minutes.

I worked for newspapers for almost 30 years and I loved every second of it.

So you may find it odd when I tell you that I don’t miss newspapers. I haven’t had a weekly newspaper for years. I won’t go into the long details of it, but from the spring day in 1993, when I downloaded my first copy of the Mosaic browser, I knew that, to borrow a line from William Butler Yeats, “all was changed and changed utterly.”

Zoom ahead to the early spring of 1994, and Doug McKay, the executive editor of the Daily News, Bill Turpin, the paper’s managing editor, and I, were putting the first newspaper on the Internet in Canada, one of the first in the world. I felt more certain than ever that the Internet was the future.

I still remain convinced that’s the truth. I can only say that I wish newspapers across the country, maybe even across the world, have been quicker to understand that.

The media especially in Canada have been filled lately with stories about failed newspapers, like the Guelph Mercury, or failing media enterprises like Postmedia. The Internet, and various businesses associated with the Internet, are eating newspapers for lunch. People just aren’t reading newspapers like they once did. Advertisers are not advertising in newspapers as in the past.

The sorry truth is that newspapers really have no one to blame for the situation but themselves.

I know there are many people who will not like reading that statement. But as someone who has been involved in media for 35 years, and most of the last 23 in online media, I can tell you it isn’t as if they hadn’t been warned.

Years ago I argued in a column that it wasn’t as if newspapers were going to completely disappear (because back then that was too much of a heresy) but they would become like one of two things: horses or radio. Once upon a time horses were everywhere. Then along came the car. There are still horses in America and Canada, but there aren’t as many and they’re much more expensive to own.

Or newspapers would become like radio, in that they would find a way to give away their content for free and be totally sponsored by advertising. That model is very much in effect right now with the Metro newspapers.

I wasn’t the only person arguing this, of course. One of the people who most influenced my outlook on the future of newspapers was the author Michael Lewis. I did a series of interviews with Lewis after he had done a television series for the BBC called “The Future Just Happened.”

Lewis was one of the first people I can remember who could see the disruptive potential of the Internet in such clear terms. We talked at length about how the Internet was going to disrupt the model of big industries like medicine, law, movies, music, and television. Lewis said that innovation always started at the edges and worked its way towards the center. When I asked what he saw in terms of the future of newspapers, he said he didn’t think the disruptive paradigm would be any different. And he of course was correct.

Before we proceed there is one myth about newspapers that I would like to address. Conventional wisdom has it that newspapers and newspaper readership were doing quite well until about the mid-90s. Papers had taken a beating from television starting in the 60’s, but readership was still strong.

The reality is that newspaper readership has been on an almost daily decline over the last 70 years. As one new medium after another has been introduced into the market, and people have different choices about how to get their news, newspaper readership has dropped. (Some sources say that the decline may have begun as early as the 1920s with the introduction of radio.)

But to get back to Lewis’s paradigm shift model, newspapers made mistake after mistake, in not understanding the way people use the Internet, or how businesses could quickly form online that would threaten the most vibrant financial sources of newspapers, such as classified or display ads. Monster Jobs, Facebook, and Craigslist are all businesses that newspapers should have had the foresight to build. Instead, multinational newspaper corporations, grown fat on 30 to 40 per cent profit margins, didn’t want to mess with what they saw as the golden goose. They did not understand that the shadow behind them was the farmer coming with the axe.

The ones I do feel for are the journalists. Many journalists have been thrown out of work because their papers’ publishers and owners did not have the foresight or the conviction to react aggressively to a changing media world. In some ways there are more options now for journalists than ever before. But there is an age gap that means journalists in their 50s and 60s, who once upon a time could look forward to another 10 to 15 to 20 years of work, lack the skills needed in a new media world.

I think the model for the future is the one currently used by the Christian Science Monitor in Boston. (Full disclosure, I was part of the crew that built the original online edition of the Monitor in 95/96.) The Monitor has created a model that works with the realities of the life of its audience. During the week it publishes its news online because most people just don’t have time to read a newspaper during the week. They check news online during the day at work or home.

Then on the weekends the Monitor publishes a print edition in more of a magazine format, understanding that on a Saturday or Sunday morning people have the time to sit down and look at a print product. The Monitor is not making money hand over fist yet, but it’s doing okay and has vastly increased the size of the audience.

I wish newspapers could last forever. I wish the Red Sox would win every World Series. Newspapers are not dead yet, they’re on life support. There will still be a few “horses” left in 2030. But times change. The reality of the world is that we don’t travel by horses anymore.

People’s lives in the second decade of the 21st century are not structured in a way that encourages the survival of newspapers. It’s just the way it is.

We had our chances and we didn’t take them. I will not cry crocodile tears.

Chapter 4: The Decline of Newspapers: http://www.hks.harvard.edu/fs/pnorris/Acrobat/VIRTUOUS/CHAPTER4.PDF

How intelligence moves to the fringe of the network: an interview with author Michael Lewis, Christian Science Monitor:

Where the Monitor Is Going, Others Will Follow, Nieman Reports: http://niemanreports.org/articles/where-the-monitor-is-going-others-will-follow/