When you’re an atheist you don’t spend much time thinking about “important” religious figures. Most of them are just too silly to care about. Pat Robertson is an example.

He’s a former Baptist preacher, and Republican presidential hopeful, and a media mogul who hosts the Christian conservative show The 700 Club where he makes pronouncements like gays were responsible for the damage in New Orleans from Hurricane Katrina. 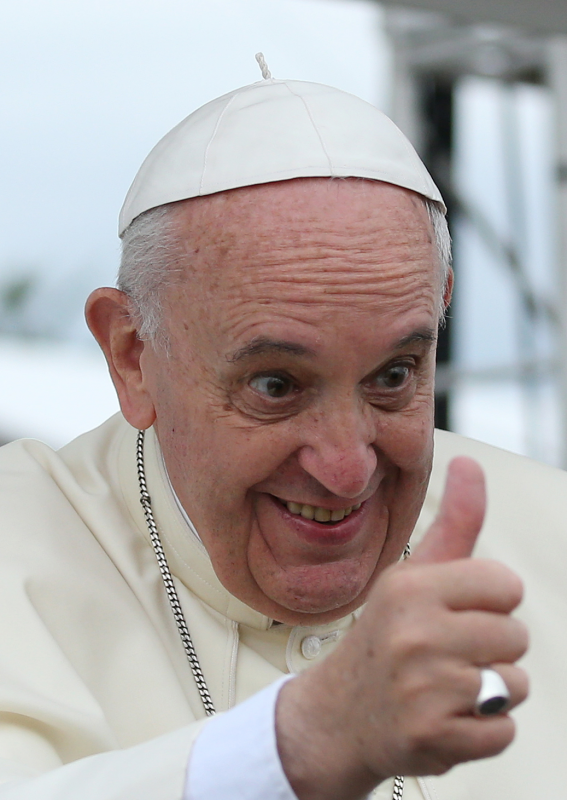 I’m not one of those atheists who tend to hate all forms of  religion. I’d like to think my approach is more nuanced.

So while I have lots of good Muslim friends, I consider the twisted hyper-fundamentalist form of Islam practiced by a group like ISIS as sort of being a modern-day version of the Spanish Inquisition on steroids.

In fact when you come right down to it I’m pretty down on almost all forms of fundamentalism: Christian, Muslim, Jewish, Hindu, pick your poison. All fundamentalists share several common traits: they think they have the only correct interpretation of who or what God is; they have no interest in reaching out to people who believe something different than what they do; they are often ready to use violence to  force others to adopt their beliefs, and they treat women like crap. I could go on but I am limited by space.

But the reality is that most people are not fundamentalists. They are just good folks who are trying to get along in the world and who may find that the idea of a divine creator helps them through their day. While I don’t agree with that and I think it’s kind of silly, I don’t really care. All of us do things that others might consider silly to help us hang in there against the vicissitudes of life

Which brings me to Pope Francis.

I don’t think Francis is silly at all. In fact I think he’s rather a revolutionary figure. With his messages of help for the poor and about the destructive nature of unbridled capitalism; with his openness to Islam; with his remarks about how fundamentalists spoil it for everybody in every religion; with his sacking of extreme conservatives both in the Church and the Vatican hierarchy, and with his decision to do away with the “Imperial” trappings of the papacy, Francis is the truest Christian to be Pope since John XXIII more than 50 years ago.

And the reason why I, as an atheist, call myself a “fan” of Pope Francis is very simple. As much as I or any other atheist might wish it, religion is not going away. At least not for a long, long time. I know the growing numbers of non-believers and those who consider themselves “none of the above” that one sees reflected in recent polls about religious preferences might suggest this will happen sooner rather than later. I’m putting my money on later. And so we as atheists have a choice: we can stamp our feet and rage against religion, or we can support those figures within religious belief systems who are fighting to make those systems more caring, compassionate, open-minded, accountable and willing to work with those who do not subscribe to their creed. And Francis is one of those figures.

Now it’s not that I think that everything he does is hunky-dory. We’re still dealing with the Catholic Church here, the same organization that took 400 years to apologize to Galileo. As someone who was raised Catholic I can tell you that nothing happens quickly regardless of who is in charge. There is a part of me that secretly fears that it is all just window dressing – a guy with a great sense of PR who won’t make the real fundamental changes that are needed.

For instance, his positions on women are sadly typical of a 78-year-old white guy. While Francis has spoken about promoting women to more senior positions within the church hierarchy, he has often described women in ways that are demeaning and extremely patriarchal.

Tina Beattie, a professor of Catholic studies at the University of Roehampton in London, this past summer wrote a column for the Guardian newspaper in which she argued that women do not seem to have a place in the pope’s vision of a Catholic church that cares for the world’s poor people. In June of this year, he dodged numerous questions from a female journalist about the position of women in the church and made jokes about female subservience.

So I look at Francis with a grain of salt. But, because he appears to be so much better than those who have come before him, you want to believe the best of him while putting those negative thoughts to the side for the moment. If Francis can make the Catholic church more open-minded, compassionate, caring and less conservative ideologically he will have achieved a great amount.

It won’t be easy. Conservative fundamentalists within the Catholic church are already mounting counter offensives and will not go down without a fight. USA Today noted in a Nov. 2 article that conservatives are saying that the church under Francis is “a ship without a rudder.” American conservative cardinals have been particularly critical. The Archbishop of Philadelphia, Charles Chaput said a recent Vatican conference called by Francis produced “confusion” and that confusion is basically the work of the devil. Cardinal Raymond Burke, former archbishop of St. Louis and now head of the Vatican’s highest court, has been even more outspoken and has made several harsh comments about Francis.

But the one key card that Francis does hold is that he is THE Pope. And according to Catholic dogma he gets to call the shots. Cardinal Burke learned this, when a few days after his remarks about the church being rudderless, Francis dismissed him as the head of the Vatican court and appointed him to a relatively meaningless ceremonial role.

So for those of us who see a new and better future for the church, and perhaps an improved relationship with groups outside the church — atheists, for instance — and if he is the man he appears to be, it is our “Christmas” wish that he stays Pope for a long time.

Tom Regan has worked for the Canadian Broadcasting Corporation and the National Film Board in Canada, and for the Christian Science Monitor and Boston Globe newspapers and National Public Radio in the United States.

A former executive director of the Online News Association, he was a Nieman fellow at Harvard in 1991-92.