Canada’s dark time might be closer than you think 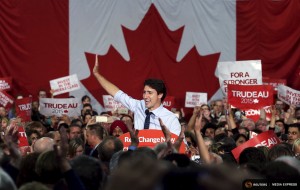 After all, the Stephen Harper-led Conservatives party made racism one of the key components of its re-election strategy, especially the idea of the registry where you could call and report on your neighbors if you thought they were engaged in “suspicious activities.” The election of the Liberals led by Justin Trudeau, his appointment of a cabinet composed of 50% women and visible minorities, his welcoming stance to Syrian refugees, reinforced Canadians’ smug notion that “we are above all that American stuff.”

Well, I’m sorry to break your little “we’re so great” bubble, but that’s not true. Over the past week Trump-inspired xenophobia has found a willing audience among Canadians.

A CBC story on Facebook, that Mexicans would not need a tourist visa to visit Canada after Dec. 1, included a headine suggesting government officials are worried about an “overflow” of Mexicans into Canada. Perhaps that gave the piece a twist that opened the door to a flood of comments, few of which could be termed open-minded towards Mexicans.

In Ottawa, a teenager was charged after an Islamic mosque, a Jewish synagogue, and a Christian church with a black pastor were hit with racist graffiti. I first heard from a friend that the word “kike,” with a very large swastika, was sprayed on a synagogue in Ottawa’s Glebe area, near where I lived in the 60s when my dad was working the federal government.

Trudeau suggested he hoped to to triple Canada’s population, from about 35 million to some 100 million. That led to predictions Canada would boost, to 450,000, the number of admitted immigrants. Instead, 300,000 are now expected because, a well-connected Canadian friend told me, the government fears “a backlash.”

Canadian media are reporting an increase in incidents of racism following the US election — officials dance around Trump as the cause, but I am convinced his rise is the catalyst.

Encouraged by the victory of racially tinged politics in the United States, the tactic has been seized as a path to victory by some candidates in Canada’s upcoming Conservative leadership convention. Emboldened by evidence some Canadians think that the government is moving too fast with its Syrian refugee program,energized by the growing public profile of white supremacist and nativist groups in the United States, Canada’s own voices of racism and bigotry are growing louder.

My son, who is studying media and politics and their effects on the broader culture, has the best description I’ve heard of what is powering racial outbursts in Canada and the US: ‘white inadequacy culture,’ the fear that white culture will disappear.

“At its root,” he told me, “I think what all these white folks fear is that they are going to be forgotten about, that their ‘culture’ will be forgotten about, when it’s really just their own fear of death and the ‘alien’ finding root. It’s a complete fiction that whites are in any way vulnerable of cultural extinction.”

But in a post-truth world, fiction can have as much, or more, force than the truth. And if the problem is, as my son put it, a fear of white inadequacy, how do we as a society deal with that? How do we find a way to calm the fears of whites who feel this way, while at the same time continuing to denounce this fear’s most virulent, dangerous forms? This is our challenge.

Canadians ignore this at their own peril. It wasn’t enough to renounce this kind of open hatred in the 2015 election.

It must be done every day, every week, every month, every year. Those of us who care cannot allow ourselves to be lulled into thinking “Well, we have gay marriage, we have no abortion law, we welcome Syrian refugees into our country, we defeated the bad guys in 2015. We can just relax.”

The 2016 election in the United States showed that this is not true. The reality is, things we care deeply about can be taken away. The truth is, the struggle never ends, the battle against those who would have us go back 50 years to a different time and a different country, for whatever reason, never ends. Yes, it is tiring to think that. But it is the reality of the world that we live in.

Is Donald Trump’s victory emboldening hate-mongers in Canada? The Globe and Mail:
http://www.theglobeandmail.com/news/national/is-donald-trumps-victory-emboldening-hate-mongers-in-canada/article32941905/

Prest: In the age of Trump, Canada might be the last defender of small-l liberal values. Ottawa Citizen: http://ottawacitizen.com/opinion/columnists/prest-in-the-age-of-trump-canada-might-be-the-last-defender-of-small-l-liberal-values

Meet the surgeon who hopes to be Canada’s Donald Trump. Washington Post:
https://www.washingtonpost.com/news/worldviews/wp/2016/11/09/meet-the-surgeon-who-hopes-to-be-canadas-donald-trump/