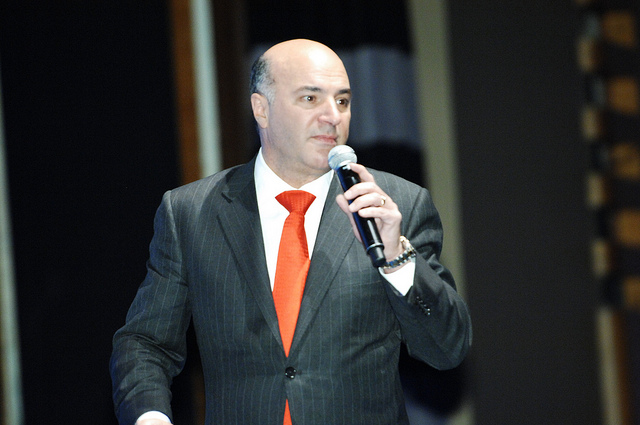 Any day now O’Leary is expected to announce his plans to run for the leadership of the Conservative party. It’s an idea he’s been toying with ever since Justin Trudeau’s Liberal party knocked the stuffing out of Stephen Harper’s Conservatives in 2015.

O’Leary’s candidacy was always back burner news, scoffed at by many because he did seem to be just a Donald Trump-clone. Awhile back, none of us thought Trump had a snowball’s chance in hell of winning the Republican Party nomination, yet alone the United States’ presidency. Well hell got very cold, Trump was elected, and now O’Leary wants to repeat that success in Canada.

Why would Kevin O’Leary believe he can lead Canada? Well the answer is easy. He’s a TV star. His role on the popular US program Shark Tank, on the Canadian version Dragon’s Den, and his many years on the CBC show Lange and O’Leary have made him a well-known figure in Canadian homes. Like Trump, O’Leary is hoping that this early 21st century celebrity status will propel him not only to the leadership of the Conservative party, but eventually into residence at 21 Sussex Dr.

Like Trump, O’Leary also claims that his status as a businessman and entrepreneur give him a leg up on the competition and show that he has the wherewithal to run the country. But also like Trump, O’Leary’s claims of business excellence are somewhat cloudy. Canadians might think O’Leary is a tough, smart businessman because of the persona he adopted for his TV appearances. But a look at his real record reveals a mixed history, including several ventures that can be called out and out failures.

Last year reporter Bruce Livesey detailed the complicated story of O’Leary’s business history. One example was O’Leary Funds, perhaps his best-known financial operation. Started with much fanfare in 2008, Livesey wrote that O’Leary was able to capitalize on his well-known celebrity status as a business guru to convince many investors to buy his funds. And at first it worked, with O’Leary Funds growing to $1.5 billion in assets.

But, wrote Livesey, “The reality was quite different. O’Leary was not even licensed to manage or invest other people’s money. Instead, he hired Connor O’Brien, a former Wall Street investment banker, to run O’Leary Funds. Moreover, by 2012, the funds were in trouble, falling to $1-billion in assets by the end of that year.”

By 2015 when O’Leary sold his company to Canoe the funds were down to $800-million in assets, due to investors pulling their money out.

Like Trump, O’Leary wants people to focus on his celebrity status and his TV persona, rather than the many potholes in his financial history.

Despite all this, O’Leary not only has a chance to win the leadership of the Conservative party, but also to one day become Canada’s prime minister. Why? He’s Trump-lite, and right now that’s the brand to be (although Donald Trump seems to be doing his best to diminish that brand).

I base this observation on a report issued this past week by the National Intelligence Council in the United States.

Every four years the NIC, which consists of the top officers at the various intelligence agencies in America, give their views of where they think the world is headed.  This year’s report – Global Trends: Paradox of Progress – is not a happy one. It predicts that climate change will continue to drive migration around the world, that growth will be flat, that more and more jobs will be lost to automation, that the gap between haves and have-nots will continue to grow, and that what has become known as “fake news” will continue to drive more and more media coverage. The result will be an increasingly angry populace, particularly in the West, which will lead to the election of more Donald Trumps —  well-known celebrities or media figures with little or no political or governing experience who capitalize on public anger about things voters cannot change.

O’Leary also has another couple of things in his favor. Unlike Trump, he does not seem to be distracted by glittery things, nor does he make outrageous sexually perverted comments. He is not taken to ridiculing his opponents as “losers,” at least not yet. And as far as we know, O’Leary has nothing to do with Russia. But have no doubt, Russian Pres. Vladimir Putin is watching from a distance, and if he thinks O’Leary’s candidacy can help diminish democracy in the West, or help Russia in some way, don’t be surprised to see a lot of fake news stories about O’Leary’s opponents appearing in Canada.

Ultimately, Canadians opposed to the kind of government that an O’Leary (or a Kelly Leitch, a controversial contender for the party leadership who has proposed screening visitors, refugees and immigrants for “Canadian values” ) would lead need to start taking that possibility seriously right now. It’s no joke. Currently, as a Canadian living in the US, I’m preparing for the worst four years I may have ever known as an adult. I don’t want to see something similar happened to my home and native land. Canadians need to press Trudeau to be a better prime minister, and help restore the NDP to political relevance. (Continuing to insist Trudeau keep his promise on electoral reform, to find better ways to elect MPs, would be a good start.)

Canada’s dark time might be closer than you think, by Tom Regan  Column

Canada was slammed in a new report on corruption. It matters because tricks –blind trusts, shell companies, anonymous accounts in tax havens — are spurring the kind of populist, enraged politics that elected Donald Trump and are behind Brexit.  Unless Ottawa ensures that Canada’s privileged classes play by the same rules as everyone else Canada, too, will experience a tide of outrage.