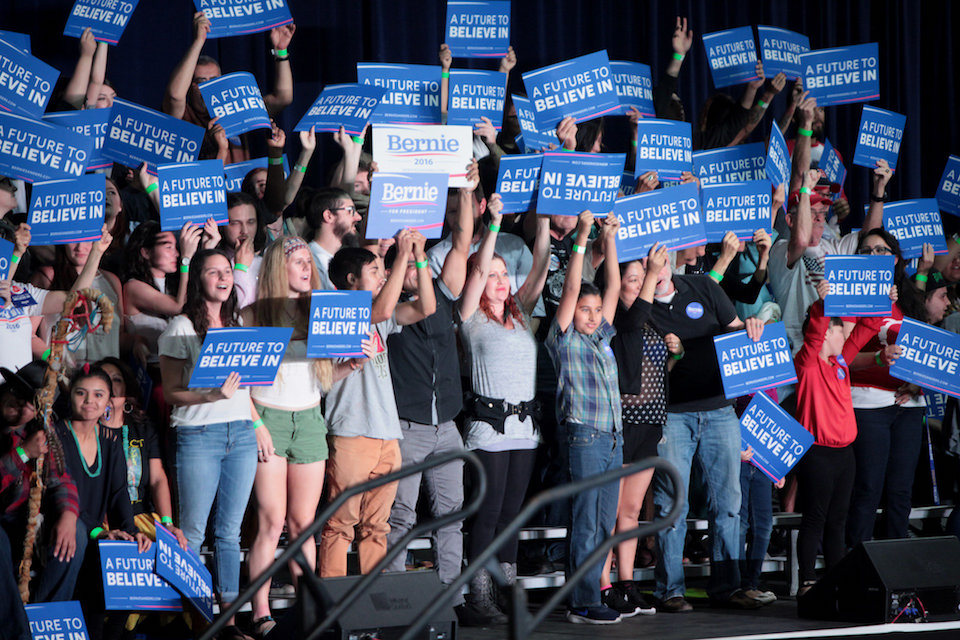 On the opening day of the U.S. Democratic National Convention in Philadelphia, I invented a drinking game. Every time I saw a black or Hispanic (heck, any person of colour, period) shown by the cable news networks of Bernie Sanders supporters, I would take a swing of beer.

It was not a surprise. The main reason Bernie Sanders was not up on that podium giving the acceptance speech Thursday night was that he attracted almost no support from African-Americans, and little from Hispanics. The reality is that angry white college students, and angry white anti-trade agitators, and angry white “I’m fed up with the political system” protestors, in a party that bills itself as the party of diversity, ain’t gonna fly – or win you a presidential nomination.

I have written of this lack of enthusiasm among minorities for Sander’s message throughout the primaries, and was eagerly awaiting a more nuanced deconstruction. It came on the Fusion website, in an article written by Terrell Jermaine Star, “How Bernie Sanders Lost Blaczk Voters.” (You could apply the same situation to Hispanic voters):

“For African-Americans, he never connected the dots from a practical perspective,” Tara Dowdell, a political strategist who has worked local, state, and federal campaigns, told me. “How would this measurably improve your life? And his colourblind approach to economics ignores the fact that this is the United States of America, where policy and economics and race are tied.”

“Put another way, it takes more than marching with Martin Luther King to win black votes.”

In the end, Bernie Sanders was as gracious in defeat as one could hope for.  He understands the moment, and acted accordingly. And as a Pew Research poll showed this week, 90% of those who backed Sanders are ready to back Clinton over Trump, for obvious reasons. (After the 2008 Democratic Convention, about 40% of Clinton supporters said they would never back Obama … which they did, of course. So Clinton is way ahead of that game.)

But the hard core supporters, the Bernie or Busters, the folks who were never Democrats and probably never will be, the folks who are more natural supporters of Jill Stein, the head of the Green Party, but who had been wooed by Sanders’ progressive ideas, still hate Clinton. Which is fine. But the idea that Clinton, for all her warts, presents the same dangers to the country as does Donald Trump is an idea so detached from reality that it’s in the realm of fantasy fiction.

And it’s a stunning example of elitism and racism – known in the US as white privilege.

This comment, on the readers’ forum at Talking Points Memos, sums up the problem: ““The Bernie or Bust supporters who say they will vote for Trump rather than Clinton can only say so because they won’t be effected much if Trump is elected president.”

In a post on playwright Brad Fraser’s Facebook page, a Canadian wondered why most American liberals were not as upset as foreigners about the DNC’s deliberate campaign to undermine Sanders.

That’s an easy one. We live here. In the end, we don’t care who won, Sanders or Clinton. But if Trump gets elected president, we Americans have to deal with it. The intellectual exercise is fine, but as the father of three girls, who has gay relatives and transgender and Muslim friends, I care about it a lot. Yea, Clinton would not be my first chose either, but when the choice is between a fascist and someone else, you choose the someone else.

And here is where the element of racism creeps in. Not overt racism of the kind trumpeted by Trump. The quiet kind that some white people just accept without even really thinking about it.

When Bernie or Bust supporters say that Clinton cheated, that “not all the votes were counted,” what they are saying is that the millions and millions of votes people of colour cast for Clinton don’t matter;  don’t count as much as their angry white votes. Now, they are not going to want to hear that, but that’s too bad, because that is what it means.

Whether Clinton wins or loses the non-support of the Bernie of Busters really won’t matter. Too many other factors are at play, and as noted above, she already has the support of many Sanders’ people. I also don’t think it will be the Bernie or Busters who will change the Democratic Party. The best thing that Sanders did was blow up the status quo and point the way to needed change. That change will come from the people who want to improve the Democratic Party, not necessarily destroy it.

But until they can find a way to make their message of change resonate with African-Americans and Hispanics – the core of the Democratic Party – their efforts will be full of sound and fury but signify nothing.

Was The Democratic Primary A Close Call Or A Landslide? FiveThirtyEight
http://fivethirtyeight.com/features/was-the-democratic-primary-a-close-call-or-a-landslide/

The Sanders movement is bigger than Bernie. Now it must defeat Trump, The Guardian:
https://www.theguardian.com/commentisfree/2016/jul/26/sanders-movement-bernie-hillary-donald-trump