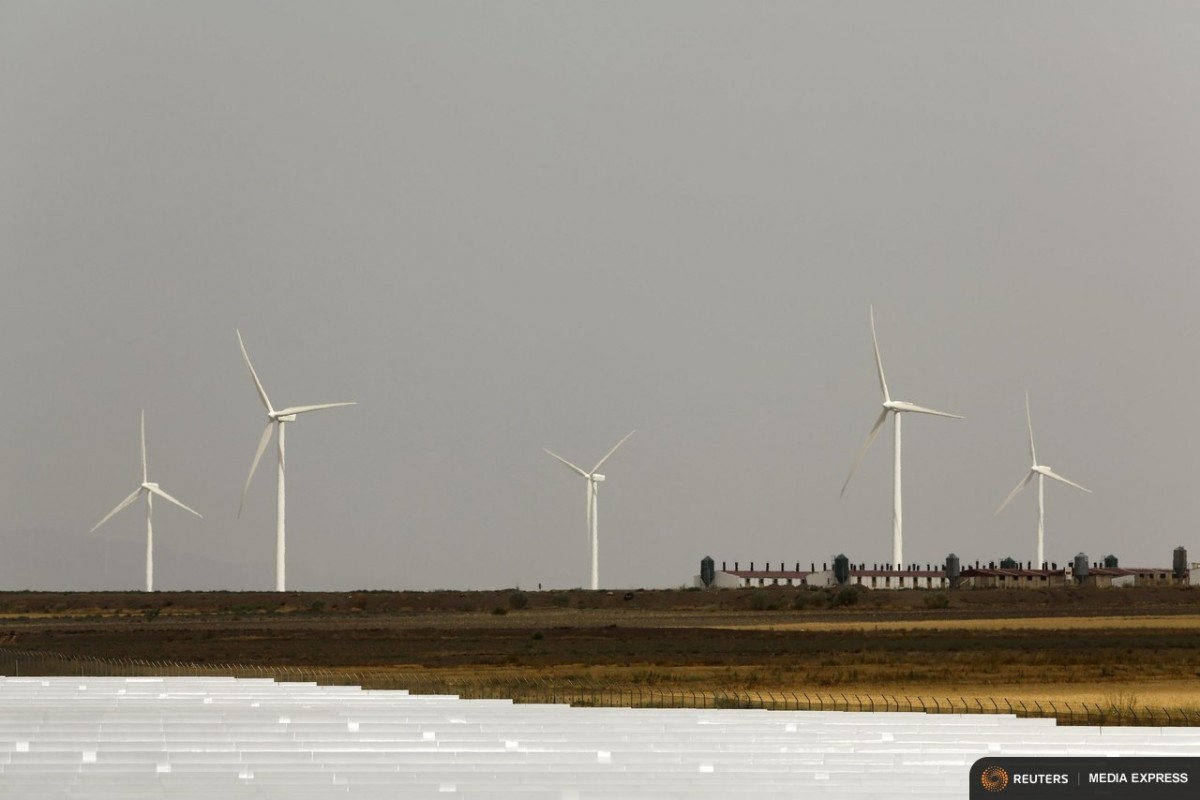 Wind turbines are seen near the Andasol solar power station near Guadix, southern Spain August 10, 2015. The plant is the biggest solar farm in the world and provides electricity for up to about 500,000 people. The 620,000 curved mirrors harness the sun’s power even after dark, and the glass alone would cover 1.5 square km (0.6 square miles) – the size of about 210 soccer pitches. REUTERS/Marcelo del Pozo

Living where I do in rural Northern Virginia, about 10 miles from the West Virginia border, it’s not uncommon to see trains pulling long lines of railcars full of coal to local power plants or towards Baltimore to be loaded onto ships or trucks, to be carried to other parts of America or the world.

In this day and age, however, the need for these trains is growing smaller and smaller. Improved solar and wind power is starting to make a difference in this country’s energy output and the jobs for these miners who fill these trains with coal is becoming more and more obsolete as the United States and the world continues to move away from fossil fuels.

President Trump, however, promised to reverse this trend. It’s part of his campaign to “Make America Great Again” by bringing back jobs to people like coal miners in West Virginia. The same is true of manufacturing jobs in the Midwest or in Pennsylvania. Areas decimated by changing global economics gladly accepted Trump’s promise that he could bring all those jobs back.

Well, I hate to be the bearer of bad news but those jobs aren’t coming back – at least not in the way the people who voted for Donald Trump want them to come back. And for many people who currently have a job in any one of several areas, and think they can just ride that job into retirement, there’s a very good chance that within the next 10 years, maybe even sooner, you’re going be out of work.

But what takes your job away won’t be that your company switched production to China or Mexico, or that an immigrant or refugee came and took your job away, or that America started to import coal from someplace like China or Russia. No, the thing that will cost you your job will be technology. Maybe something as simple as a piece of software, or as complex as a robot, or as small as a microchip or as large as a field of solar arrays – regardless it will allow your employer to lower costs and improve productivity. And you’ll be out in the street.

President Donald Trump loves to complain that China and Mexico have been stealing jobs from American workers and that he plans to bring those jobs back. And you can see why this campaign promise resonated with so many people – there are five million fewer manufacturing jobs in the United States now than there were in 2010. Bringing those jobs back is nice idea but it’s totally pie-in-the-sky and not doable. Because the truth is that even if you brought those manufacturing jobs back they would probably be taken by a machine and not a human.

There’s a lot of recent research to back this up. A study by Boston Consulting Group shows that industrial robots perform 10% of manufacturing jobs today. By 2025, eight years, they will perform 25%. Another study by two Ball State professors showed that between 2000 and 2010, 87% of manufacturing jobs were lost to technology and not to trade. If that’s not bad enough, a report from McKinsey and Company showed that 49% of current worker activities can be replaced by technology. And that number is only going to grow, particularly in jobs that require repetitive tasks. Jobs, for instance, like in accounting, food preparation, taxi driver, truck driver or even some aspects of journalism, will be replaced by machines or robots that can do the job faster and allow increases in productivity.

So why is more attention not paid to this? There are probably two answers: 1) American businesses like to make money and cut costs. Their concerns are for their shareholders and not for their employees. If making more profit means replacing humans with machines, then so be it. They just don’t like to talk about it a lot; 2) it’s much easier for an unemployed 50 year-old white guy to blame foreigners or outsiders for losing his job than it is to blame technology. The steelworker in Pennsylvania has a much easier time blaming a worker earning less in China, then struggling with the fact that technology made his job redundant.

Yet there is a way to combat this problem. It’s called education.

For instance, in late 2016 there were over 300,000 manufacturing jobs available in the United States, numbers similar to what were available before the 2008 recession. There is, however, another important factor. Most of these jobs require what are known as “high skill sets” which means that they require a level of education that will enable a worker to operate technologically advanced machinery. To go back to our steelworker in Pennsylvania, chances are he or she is not interested in returning to school to learn a whole new skill set. It’s just much easier to complain about China and Mexico.

Meanwhile, most other Americans are ignoring the writing on the wall. A study by the Pew Research Center show that 80% of Americans think that their job will existed in its current form in 50 years. It’s just whistling past the graveyard.

It boils down to this. American jobs are being lost to technology, not to trade. The answer is education and improved skills but that requires much more investment in education. And based on who President Trump just named as his Secretary of Education, the befuddled Betty DeVos, there is a serious question whether that will happen or not.

President Trump can rant all he wants about China and Mexico but that won’t stop American jobs from disappearing. And unless he faces the real issue, it’s only going to get worse.

Rise of the machines: Fear robots, not China or Mexico:
http://money.cnn.com/2017/01/30/news/economy/jobs-china-mexico-automation/

Why Are There Still So Many Jobs? The History and Future of Workplace Automation
https://www.aeaweb.org/articles?id=10.1257/jep.29.3.3

Harnessing automation for a future that works:

Public Predictions for the Future of Workforce Automation:
http://www.usatoday.com/story/money/2017/02/06/special-report-automation-puts-jobs-peril/96464788/