The U of A put on quite a pageant, featuring a processional and a recessional where dozens of colourfully robed professors streamed on stage to their seats, and then ended the ceremony by marching off stage again, as a brass band played Pomp and Circumstance – just after the university pitched students and their parents to consider themselves alumni and contribute to the university’s endowment fund, which is already at $1 billion. 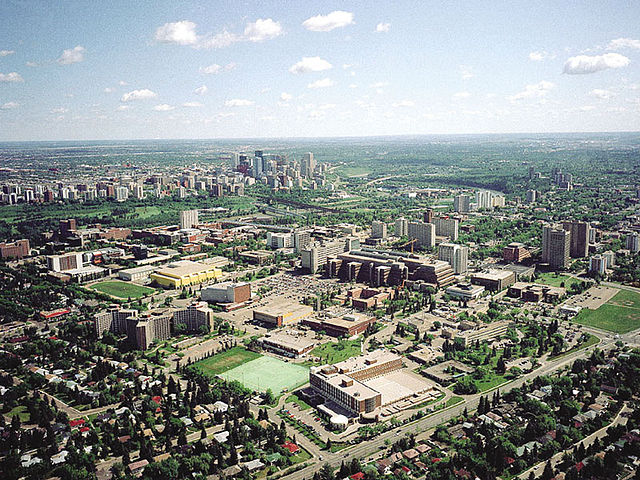 Onstage, U of A president Indira Samarasekera crowed that University of Alberta will graduate 6300 students this semester. Every morning and every afternoon during Convocation Week, a new crop of about 300 “graduands” in purchased caps and rented gowns and sashes sit through several speeches before green-robed proctors summon them row by row to snake in single file around the back of the stage. Then each steps forward centre stage and gives the silver-voiced announcer a card with their name to proclaim.

A booklet of instructions included with the gown gave our grad some hint of the smooth assembly line that pushed him and other grads along – from the official handshake that confirmed their degree, to six other handshakes that gently pulled them along to the stage corner – where they stepped sideways and smiled for one photographer, then stepped down the stairs and smiled for another, before proctors guided them to their seat.

Efficiency is essential in the two-and-a-half hour ceremony because U of A is handling twice as many students as before. Full-time university enrollment more than doubled in Canada in the thirty years between 1980 to 2010, from 550,000 to 1.2 million, according to the Association of Universities and Colleges of Canada. What with precision-drill graduation ceremonies, corporate language, well-endowed business schools and increasing numbers of B.Comms, modern universities are embracing many aspects of Big Business.

For many parents taking photos, seeing their child graduate from university has been a lifelong dream, whether as a family first or as a family tradition. “Post-secondary education families spend as much (13.5 percent of household income) saving for their child’s education as, on average, they do annually for food,” said Jonathan Champagne, executive director of Canadian Association of Student Associations (CASA).  In addition, 14 percent of parents mortgage or re-mortgage their homes to pay tuition, and one-third (33 percent) dip into their retirement savings.

Many parents still deeply believe, as United States President Barak Obama said recently, “…that in a 21st century economy, a higher education is the single best investment that you can make in yourselves and your future…”

On the other hand, Obama continued, “…and we’ve got to make sure that investment pays off.” Pays off? There’s the rub. “My favourite job ad,” said our son, twirling his cap, “was the tile store that wanted a person with an MBA to staff its counter, for $17 an hour.”

Only a decade ago, a person who graduated with an MBA could expect immediate six-figure salary offers. Now the Degree Bubble has burst. Between dumbed-down public education systems, an overabundance of graduates, and endless corporate and small business campaigns to drive down wages overall, degrees have suffered severe deflation in the seven years between 2007, when our son entered university, and his graduation this year.

Let’s acknowledge that talking about university education as a job ticket – and not as a benefit in itself – is distasteful. Unfettered learning is priceless. The conversations that go on within halls of knowledge are their own justification. And if we really want to talk economics, the social and financial profits from university research probably compare favourably with government investments or tax incentives for, say, sports, or the energy industry. We should rejoice that 70 percent of 22 – 44 year-olds have some kind of post-secondary accreditation!

Indeed, sociologists, economists and think tanks still use post-secondary education as a significant indicator of social well-being, and rightly so. “Educational attainment reflects what skills are available to society and the labour market,” according to Employment and Social Development Canada. ESDC found that, in 2012, more than half (53.6 percent) of adult Canadians had completed some kind of post-secondary education – up nearly 21 percentage points in 20 years, from about a third of adults in 1990.

Education is also the key to opportunity in a democracy, and opportunity is the key to social mobility. Even a poor child can aspire to rise in social class, by doing well in school. But until very recently, many kids only aspired to blue collar work, which requires a high school diploma at most.

A few scant decades ago, high schools taught marketable craft skills, such as automobile repair or commercial cooking or sewing. Students who preferred working with their hands often apprenticed out to future employers at Grade 10 – or, if they were lucky, got hired on at a local factory. Demand for skilled workers and union bargaining meant that a blue collar family could live a comfortable life, with security and hope for a better future – including university educations for the children. Likewise, high school grads qualified for emerging professions such as accounting and journalism which also relied on apprenticeship – on-the-job training – rather than formal schooling.

ESDC found that, among Canadians older than 65, nearly four in ten (37 percent) did not have high school diplomas. I’ll say that again. Almost forty percent of Canadians born in 1950 or earlier never finished high school.

So you can imagine that in in 1946, after World War II, earning a BA was a very big deal. Through “the Canadian GI Bill,” suddenly thousands of returning soldiers did earn BAs, changing their lives from farming or seafaring to glamourous urban jobs earning much more money. In the 1950s and ‘60s, a person with a university degree had a genuine job ticket, a pass to the middle class.

This is the background for statements such as the U.S. government statistic that a worker with a BA earns nearly a million dollars more over a lifetime, than a worker with a high school diploma. For average lifetime U.S. workforce earnings, a high school graduate usually earns $1.2 million; a BA grosses $2.1 million, and over a lifetime, on average, a master’s degree holder earns $2.5 million.

Figures like these have spurred university enrollment. By 2012, nearly 70 percent (69.2) of young Canadian adults (22 to 44), and six in ten (59.2 percent) of middle- aged (45 to 64) Canadians had earned a degree or occupational diploma or certificate. Because degrees had become so important, many of the middle-aged degree-holders had actually gone back to school in order to win credentials in order to qualify for jobs they already held.

These days, some degrees have more value than others. A B. Comm might get a job interview in a corporate setting. A B. Sc might get an internship in a business incubator. As for a Bachelor of Arts — you want fries with that?

“The college degree is becoming the new high school diploma: the new minimum requirement, albeit an expensive one, for getting even the lowest-level job….” began a story that Catherine Rampell wrote for the New York Times a year ago.

To 2014 grads, the idea that a BA could be a job ticket seems beyond belief: “… the higher supply has led to some unfortunate employment prospects. These days, it’s not uncommon to see college grads working in shopping malls and coffee shops,” says a post on a blog run by and for youth interns.

Of course, with manufacturing and a lot of office work outsourced overseas, retail is where the jobs are these days. No, really, “personal consumption expenses” drive 70 percent of the U.S. economy – of which more than half involves retail sales.

Instead of gaining security, new grads find themselves joining what’s known as the “precariat” – precarious workers who piece together their living from temporary, part-time, contract or self-employment – never earning enough to be able to pay down debt and still have a life. Although they can’t even land a job interview without a BA, almost half (48 percent) of employed college grads are in jobs that don’t really require a college education.

And the problem is global. “Forty percent of recent graduates in U.S. are underemployed,” said Canadian government of the Bank of England Mark Carney, “and youth unemployment is around 50 percent in the worst affected countries in the euro area.” Carney told the New York Times that capitalism is “eating its children.”

Last year, French and Quebec students staged massive protests against escalating tuition fees. Although student debt was a factor in the Occupy movement, Anglophones seem less likely to take to the streets.

Ironically, the very business and government leaders who encourage higher university tuition fees, then exhort new graduates to embrace entrepreneurship — which they are understandably reluctant to do. Graduating with a $47,000 debt makes any other borrowing higher risk. Indeed, young adults are going bankrupt at unprecedented rates, with 24 – 35 years olds filing for bankruptcy at a rate second only to 35 to 44 year olds, according to “Generation Broke.”

Canada Student Loans are administered by the federal government, although most provinces offer loans too. The CSLC interest rates are so high (prime plus five percent for the fixed rate) that some banks are offering Student Line of Credit programs as an alternative. The government’s advice if loan repayments eat up too much of the monthly remittances compounds the problem. They advise negotiating for lower monthly payments – which of course means paying much more interest over a longer period of time.

Other approaches to education are possible.

While grads are not the only workers caught by the job shortage – older workers suffer too – downloading the national debt onto most of a new generation and then allowing them to go jobless seems particularly short-sighted. These young people are bright, talented, creative, and ingenious. Give them security and direction, and they could achieve wonders – such as rescuing the planet from the environmental mess their elders have created. Canada has much to lose and nothing to gain by leaving them twirling their tassels and grinding their gears. 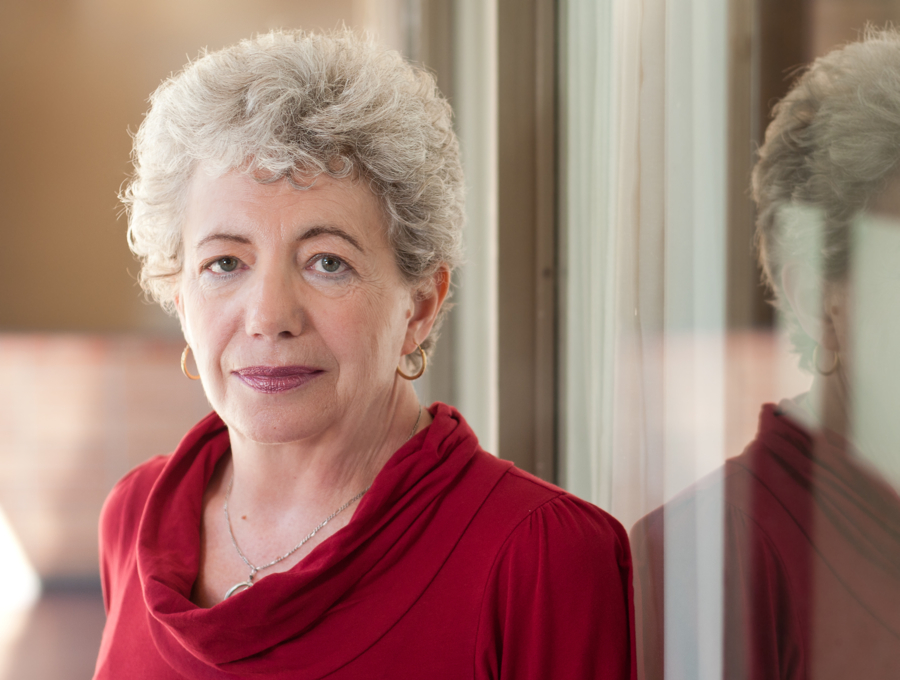