“Wine is the most civilized thing in the world.”  -— Ernest Hemingway, and if not, so what?

His text a Hemingway appreciation, “wine is the most civilized thing in the world,” Mike Sasges savours this week’s viticulture news. 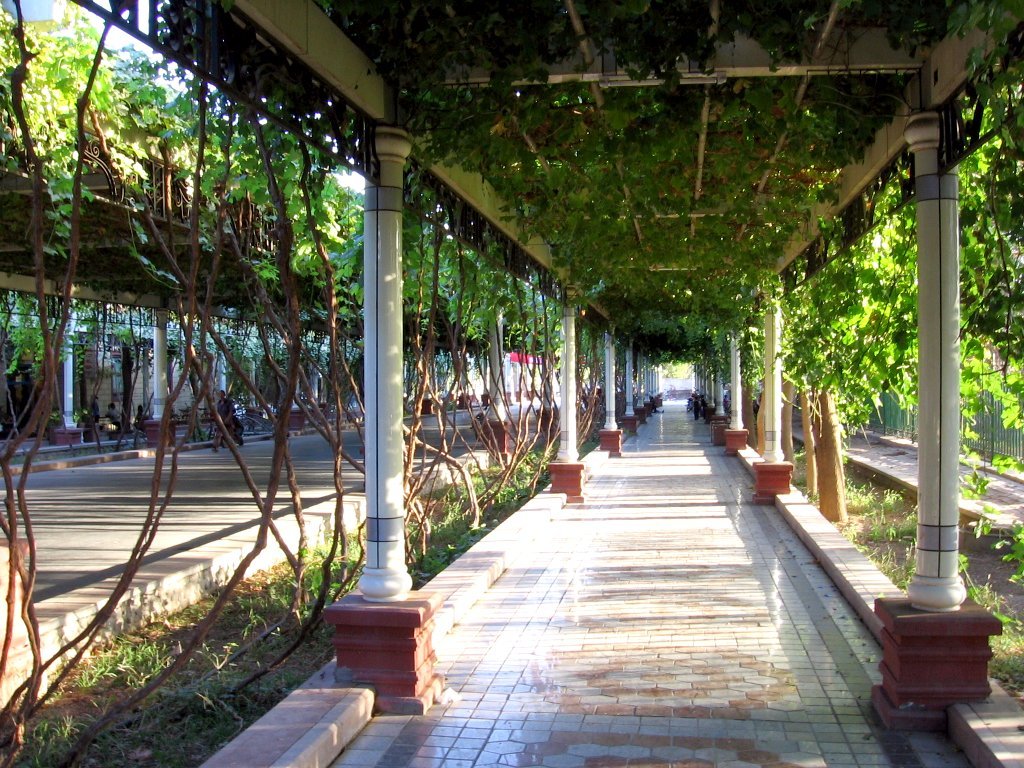 Sidewalks on a street in the “grape valley” of Turpan, in western China, are shaded by pergolas with grape vines. Creative Commons via Wikipedia

Chiang was glad to see us, and shook hands and gave us good rooms looking out on the square, and then we washed and cleaned up and went downstairs to the dining room for lunch.

There are two dining rooms in Chiang’s inn. One is on the second floor and looks out on the square. The other is down one floor below the level of the square and has a door that opens on the back street that the grapes pass along when they are run through the streets early in the morning on their way to the press.

It is always cool in the downstairs dining room and we had a very good lunch. The first meal in China is always a shock, the egg rolls and barbecued pork and ginger beef and vegetable chop suey and house special chow mein, and the fortune cookies. You have to drink plenty of wine to get it all down.

Chiang is what the Spanish call an aficionado, one who is passionate about wine. All the good growers and wine-makers stayed at Chiang’s inn; that is, those with aficion stayed there. Some of them stayed once, perhaps, and then did not come back. The good ones came each year. On his desktop, in a folder he called aficionado, were the photographs of grape-growers and wine-makers Chiang had really believed in. Photographs of those who had been without aficion Chiang kept in another folder on his desktop. They often had the most flattering inscriptions. But they did not mean anything. One day Chiang put them all in the trash. He did not want them around.

That evening, for an hour after dinner, every one in town, all the good-looking girls, the officers from the garrison, all the fashionable people of the town, walked in the street on one side of the square while the café tables filled with the regular after-dinner crowd.

Chiang and Chiang’s friend, Li, were at one of the tables. Li makes wine, and it was not really the bad wine the critics said it was, although it was very poor wine.

They had their laptops open and were reading the dispatches from Paris and London about some pronouncements the other day from the International Vine and Wine Organization.

Last year, and for the first time, only Spain had more hectares of vineyard under cultivation than China. The Spanish number was more than one million hectares; the Chinese, 799,000. The French number was 792,000 hectares, making 2014 the first year the Chinese planted more vineyards than the French.

Two years ago, and for the first time, the people of China drank more red wine than any other people in the world. The 1.865 billion bottles of red they put away in 2013 was more than double their consumption in 2008.

What happed? I asked. And if the East is Red, why?

Chiang took the first question. “The party wants China to be self-sufficient in all sectors, and viniculture is no exception.”

Li shared what he knew about the enthusiasm for red. The Chinese like the colour of red. Have a look here, old chap, he said, pointing to his laptop, read what people who should know know.

“Apart from its virtues with regard to health, which have been widely lauded as an alternative to the impact of excessive consumption of rice-based spirits, the popularity of red wine is largely due to the symbolic importance of its color,” an exhibition organizer called Vinexpo explained in a recent study displayed on Li’s screen.

“Red is a very positive hue in Chinese culture, associated with wealth, power and good luck. In business circles, these three values are fundamental. Red wine is therefore an obvious choice for business hospitality, where partners can drink to each others’ health.”

Li didn’t want me to leave his screen, wanted to me to see how the “subs” at the better English papers enjoyed the news from Paris about China’s vineyard plantings. “Zut alors! China now has bigger vineyards than France,” and “A bottle of Beijing, please: Is Chinese wine any good?” (The Telegraph), and “Rice wine? China’s thirst is for red wine,” (The Times) are vintage representatives.

I do not know what time I got to bed. I remember undressing, putting on a bathrobe, and standing out on the balcony. I knew I was quite drunk, and when I came in I put on the light over the head of the bed and started to read. I was reading a book by Turgenieff. Probably I read the same two pages over several times. It was one of the stories in “A Sportsman’s Sketches.” I had read it before, but it seemed quite new. The country became very clear and the feeling of pressure in my head seemed to loosen. I was very drunk and I did not want to shut my eyes because the room would go round and round. If I kept on reading that feeling would pass. Some time along toward daylight I went to sleep.

The English-language home page of the International Vine and Wine Organization is here: oiv.int

The French-language Wikipedia article on Chinese viticulture is rich in photographs: fr.wikipedia.org/wiki/Viticulture_en_Chine

Mike Sasges consulted “fre” ebook edition of The Sun Also Rises published on a website whose “host” is located in Beijing:  24grammata.com/wp-content/uploads/2013/06/Hemingway-TheSunAlsoRises-24grammata.pdf