On the 50th anniversary of the Easter Rising in 1966, a terrorist explosion blew away the top half of the iconic Nelson’s Pillar – a slightly smaller version of the Corinthian column in London’s Trafalgar Square – that had dominated Dublin’s skyline for 157 years.

I was sad to see it go. My father had helped me climb the Pillar’s interior spiral staircase when I was a child (168 stone steps, Google now tells me) and we agreed afterwards that the panoramic view from the top was spectacular. Down below were bustling O’Connell Street and the swans and brewery tugboats of the River Liffey. Off away to the south were the misty grey peaks of the Dublin mountains. Over to the east we could catch a glimpse of the blue-green waters of Dublin Bay. 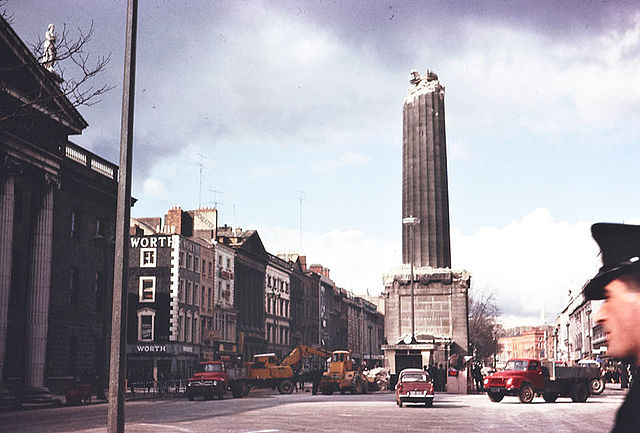 Fair Use via Wikipedia

The Pillar was the city’s focal point. All the buses stopped there. Downtown office workers ate their lunchtime sandwiches there. They met there again after work to repair to a nearby hostelry for a quick pint before heading home. It was my rendezvous of choice whenever a young lady caught my eye at the Saturday night rugby club dances. “See you on Wednesday evening, then? Meet you at the Pillar.”

Did I ever stop to think this imposing granite column was a symbol of British imperialism on republican Irish soil? Not really. To me, as to the songwriter Pete St. John, it was just a part of Dublin in the rare old times.

Others, obviously, felt differently. They came out in the early morning hours of March 8, 1966 and blew Nelson off his pedestal. Nationalistic sentiment clearly still ran high. Republican bombs in Dublin had earlier dispatched to oblivion the statues of King William of Orange, King George II and Viscount Hugh Gough. It was just a matter of time before Admiral Nelson’s day of reckoning came too.

The police never caught the culprits. I don’t think they even tried to find them. When a 67-year-old Dublin man, Liam Sutcliffe, went on the radio in 2000 to claim responsibility for the bombing, the police interviewed him briefly and let him go. This was one cold case they seemingly wanted to remain unsolved. Or perhaps, like many Dubliners, they just wanted to treat the event as more of a prank than a serious crime. Nobody had actually been injured in the 1966 blast. The normally humourless president of Ireland, Éamon de Valera, was said to have phoned the Irish Press that morning with a suggested headline for the story: “British Admiral Leaves Dublin by Air.”

Bomber Sutcliffe told the Irish Times in 2003 that he felt a grand gesture was needed to recapture the spirit of Easter 1916, when a motley crew of poorly armed freedom fighters, poets, teachers, dreamers, farmers and trade unionists went out to take on the might of the British army in what was then seen as a losing battle for Irish independence.

“The anniversary of the 1916 Rising was being marked with functions and dinners and the campaign was fizzled out,” Sutcliffe told the Times. “We thought the Rising should be marked with something a bit more dramatic.”

If indeed Sutcliffe was responsible for the Pillar bombing, he did a very clean job. The top half of the monument fell north along the length of O’Connell Street without damaging a car or breaking a window. So reported the newspapers at the time, although researchers have since insisted the damage was more extensive than originally thought. When the Irish army came along a week later to demolish the jagged stump that had survived the explosion, the soldiers blew out many of the nearby plate-glass shop windows with their plastic explosives. “It came down, but not exactly the way we had planned,” said Col. R.G. Mew, the officer in charge of the stump removal operation.

There has been no grand gesture this year to mark the 100th anniversary of the Rising. There have been more functions and dinners, museum displays, lectures, documentaries on television, special commemorative sections in the newspapers, and learned articles written by historians who view the Rising as a transformative event: the first shot fired in a war that eventually led to the establishment of the 26 counties as an independent sovereign republic.

Attitudes in Ireland – particularly in Southern Ireland – have changed. England is no longer viewed as the enemy. The Queen has come to visit and shaken hands with Martin McGuinness, the former IRA chief who did time in prison for his republican activities. Pictures of Kate and William and baby George grace the front pages of the Dublin newspapers just like they do in newspapers elsewhere around the world.

I left Dublin for Canada in November 1966, eight months after the bombing that brought down Admiral Nelson. Ireland then seemed to me like a sleepy backwater and I wanted to see what the rest of the world had to offer.

My patriotic Christian Brothers teachers had brainwashed me into believing that the English should be denounced unto perpetuity for the 400 years of suffering they had visited upon us through the yoke of imperialism. It took a few years before I could get comfortable with the idea of pledging allegiance to the Queen.

Ireland has since become more tolerant, more sophisticated, less nationalistic, more cosmopolitan. It was the first country in the world to legalize same-sex marriage by popular vote. The restaurant dinner menus are no longer limited to selections of stewed meat and two veg. The country feels now like an integral part of Europe, no longer an isolated island outpost on the western edge of the continent.

I’m relieved to see there was no grand republican gesture to mark this year’s anniversary. I still miss the Pillar. It gave our city a distinctive appearance. During the years it stood there, it provided us with a beacon for visitors as recognizable as the Eiffel Tower or the Empire State Building. After it was blown to smithereens, it left us with a diminished city core that looked like the monstrosities that pass for human shelter in Luton, Coventry, Birmingham and Bristol. There never was a defensible reason for taking Nelson out. His world had already collapsed when he was toppled from his perch in 1966.