“Mom, I want braids,” I said one day, as we walked home from my kindergarten to our apartment on the South Side of Chicago. “All the girls in school have braids. I want braids.” “Don’t you like your hair in a bob?” she countered. “Like mommy’s?” But I persisted and she gave in and let me grow my hair long. We soon learned that braids were the only way to tame my thick coarse wavy-with-a-chance-of-curls hair, so I wore my hair in pig tails most of my childhood and in one long braid until my stepmother’s sudden death in 1984 inspired a big chop in my mid-30s. 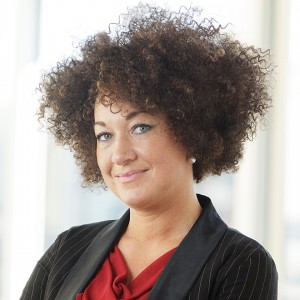 Even before then, however, I’d looked at my early class photos and realized with a start that I could never have braids like my classmates’ braids. They were almost all black girls, with what were known as (please forgive the expression) “picaninny braids”, their heads covered with short little braids of hair brushed straight and braided tightly, to straighten it into “good hair”. This practice is so pervasive among black women that comedian Chris Rock, alarmed by his daughter’s fascination with “good hair,” made a documentary titled “Good Hair” about what he discovered is a $9 billion a year industry. At one point he asks a black woman under a hair dryer with her hair in papers,“What’s your definition of ‘good hair’?” She replies, “When your hair looks relaxed and nice.” Cut to a black male hairdresser explaining, “If your hair is relaxed, white people are relaxed. If your hair is nappy, white people aren’t happy.” That’s the sort of wisdom white people don’t have to share among themselves.

Of course, I had no idea that braids had any social implications when I was in kindergarten. I just wanted to fit in. We moved and I transferred out of that school soon anyway. But I was wearing my hair in braids when the civil rights movement came along 10 years later, and indeed until I reached middle age.

These memories re-surfaced when the bizarre Rachel Dolezal story broke. Riddle me this: why would a white person pretend to be black in America? Black author and commentator Tavis Smiley asked the same question in a New York Times editorial: “I love being black, and wouldn’t want to be anything else, as if I have a choice. But let’s be clear, I didn’t volunteer for this. So, why would you pass for black?”

Basketball champion Kareem Abdul-Jabaar says her reasons don’t matter. “…you can’t deny that Dolezal has proven herself a fierce and unrelenting champion for African-Americans politically and culturally,” he wrote in an TIME magazine op-ed. “Perhaps some of this sensitivity comes from her [four] adoptive black siblings. Whatever the reason, she has been fighting the fight for several years and seemingly doing a first-rate job….This seems more a case of her standing up and saying, ‘I am Spartacus!’ rather than a conspiracy to defraud.”

My own early experience suggests that a young child would do her best to fit in and to adapt to whatever characteristics her parents seem to prefer. In a fawning profile in the East Washington University newspaper, writer Shawntelle Moncy said that as well as being a professor at EWU, “Doležal has many faces in Spokane County, including NAACP President, chairman for the Office of the Police Ombudsman — she participates in ride-alongs, observing both police and citizens’ behavior — advisor for Black Student Union at EWU and Africana Studies professor at EWU. She’s an activist wherever she steps foot, a columnist for the Inlander and a mother 24/7.”

Dolezal talked a bit about growing up in a fiercely Protestant off-the-grid household where the children hunted their own food with bows and arrows. Their family moved often, across the US and even to South Africa. Moncy writes that she “…has no contact today with her mother or stepfather due to a series of events that still haunt her thoughts today. Doležal and her siblings were physically abused by her mother and stepfather. ‘They would punish us by skin complexion,’ she said.

The Homeschoolers Anonymous website – for adult survivors of extreme (usually religious) home schooling – offered a survivor’s analysis. “Rachel was homeschooled through Christian Liberty Academy,” says a note signed by HA co-ordinator R.L. Stollar. “Her father, Larry Dolezal, worked for Creation Ministries International and was charged in 1999 with felony theft though the charges were later dismissed. We have also heard testimonies from numerous homeschool alumni who grew up knowing the Dolezal family that frequent and significant child abuse occurred in the family. The parents allegedly forced both Rachel and her older, biological brother Joshua to beat their younger, adopted siblings with plumbing supply line and two foot long glue sticks, a practice inspired by Michael and Debi Pearl’s book, To Train Up a Child. (Forced sibling-to-sibling corporal punishment is sadly not uncommon in some homeschooling circles.) Such a practice conjures up troubling images of Larry and Carri Williams, another homeschooling family that abused to death their adopted child, Hana.”

The Easterner interview says Rachel Dolezal left home to attend university in art, with a full scholarship. Then she eloped with a black man in 1999 and soon after she began raising a biracial child, who she says is her son and some reports say is her adopted brother. Her marriage ended in divorce in 2004. Homeschoolers Anonymous picks up the thread. “Now comes the latest development in the Rachel Dolezal saga: Dolezal’s older brother Joshua is awaiting trial on charges he sexually abused a black child. Insinuations have been made that the parents spoke up now to retaliate against Rachel’s attempts to get her brother charged for abuse..”

“On one level, you’ve got to say to [Dolezal], ‘you’re misleading us’, “ Rev Al Sharpton told Mediaite, “but another level, mom and dad, come on! Are we gonna have this dysfunctional family stuff play out and distract us from key civil rights causes?”

So we come back to Tavis Smiley’s question: “When God was passing out colors, who raised their hand for a life of social disenfranchisement, political marginalization, economic exploitation and cultural larceny? And that’s on top of always feeling unsafe, unprotected, subject to random violence and being hated for who you are….”

Kareem Abdul Jabbar comes back, in turn, to a central truth: “The thing about race is that, scientifically, there is no such thing. As far back as 1950, the United Nations Educational, Scientific and Cultural Organization (UNESCO) released the conclusions of an international group of anthropologists, geneticists, sociologists, and psychologists that stated that the concept of race was not a scientific entity but a myth. Since then, one scientific group after another has issued similar conclusions…..As far as Dolezal is concerned, technically, since there is no such thing as race, she’s merely selected a cultural preference of which cultural group she most identifies with. Who can blame her? Anyone who listens to the Isaac Hayes song, “Shaft,” wants to be black—for a little while anyway.”

Let Rachel Dolezal Be as Black as She Wants to Be, by Kareem Abdul-Jabbar, Time: http://time.com/3921404/rachel-dolezal-naacp-race-kareem-abdul-jabbar/
a Life to be Heard, the Easterner, by Shawntelle Moncy:: http://easterneronline.com/35006/eagle-life/a-life-to-be-heard/#sthash.1aUk3liU.2HyACdZ8.dpbs

Al Sharpton Scolds Rachel Dolezal’s Parents: ‘Are You Really Gonna Do This To Your Kid?’, Mediate: http://www.mediaite.com/tv/al-sharpton-scolds-dolezal-parents-are-you-really-gonna-do-this-to-your-kid/

Read Penney Kome’s reporting on the Alberta, Canada, election win of the NDP in May 2015:  In Notebook: Alberta poised to turn NDP orange as Tory grip on power withers , and an analysis, Canada’s Famous Five would be proud,