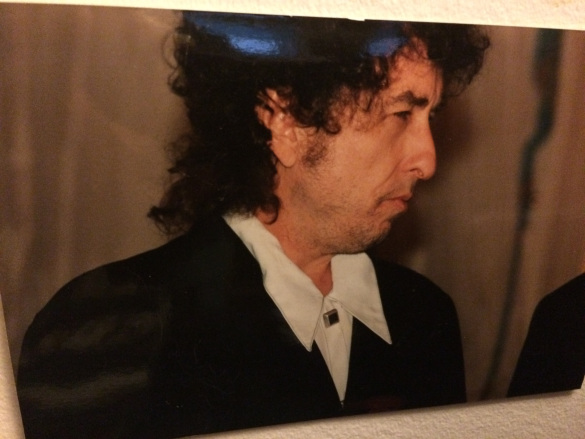 Finally, the gilded, ceiling-high white doors opened, and there he was, ambling into the opulent room, followed by France’s flamboyant minister of culture at the time, Jack Lang. He was wearing a snazzy, tux-like black jacket over a sharp white shirt, sleek dark pants and, I couldn’t help noticing, cowboy boots. As flashbulbs went off, Dylan seemed like a deer caught in the headlights. He looked haggard, eyes half open, as if he’d just been roused from bed, without a shower and“ one more cup of coffee before I go”. We were separated only by a low velvet rope. I could have reached out and touched him.

It was almost unnerving, being so close to the figure who’d been my hero and constant companion since high school, when I put on my father’s copy of Another Side of Bob Dylan for the second time, and began listening to the lyrics. (The first time I thought what I heard was a joke…)

As Jack Lang spoke briefly about Dylan’s music and “poésie”, Bob rocked nervously side to side, glancing about, twitching. He appeared “lost in Juarez” or “old Honolulu, San Francisco, Ashtabula”, an ordeal merely to remain still. Lang then reached into his pocket for the illustrious medallion and closed in to affix it around his neck. Dylan stiffened, as the Culture Minister embraced him on both sides of his cheeks in that winning Gallic manner. Awkwardly, Dylan took out a crumpled piece of paper, and muttered: “Mille mercis.” Seemingly relieved that was over, he said in English, a bit more audibly, with his hand over his heart: “A thousand thank you’s.” For the first time, he actually smiled. Briefly. Dylan stayed another 30 seconds or so for the photographers (“Bob! Bob…!”) and poof, he was gone. The Jokerman had made his escape.

He’d been before us no more than five minutes. As is almost everything about Dylan, the entire experience was surreal. One can expect something just as strange IF he appears before the Swedish Academy to pocket the Nobel Prize for Literature on Dec. 10. There’s no guarantee he will show up at all.  The night the Prize was announced, Dylan’s “never-ending tour” played, appropriately, Las Vegas. (On Oct. 30, he’ll be in Paducah.) True to form, he said not a word to the audience about anything, least of all the astounding recognition of his life’s work. And so far, not even an official statement. Is anyone surprised? If there is one constant of Bob’s oddball, reclusive life, it’s this. He has remained, from the beginning, a contrarian. As University of Toronto literature teacher Ira Wells wrote perceptively in the Globe and Mail: “It’s hard to think of an artist who has worked harder, or more consistently over a span of decades, to alienate his own fan base.” Like a true artist, and I am one of those who consider Dylan the Shakespeare of our age, he lets his work speak for itself. And what a legacy it is.

People who criticize the Nobel Prize going to “a songwriter”, miss the point. Dylan is so much more than that. His vision and lyricism over more than 50 years is out there all by itself. It goes far beyond his terrific protest songs and mind-bending rock canticles of the 1960’s. There is a reason so many books are written about Dylan by serious literary critics. For all the greatness of Bowie and Prince and Springsteen, that doesn’t happen with their music, outstanding as it is. Bob Dylan has treasured words all his life. He uses them in a way no songwriter has, before or since. (Leonard Cohen comes close, but lovely Leonard has never come close to the over-arching influence of Dylan. They are mutual admirers of each other, by the way.) Bob’s mystifying muse continues to drive him forward. The Nobel Prize is for an exceptional body of work, not for a bunch of good songs. In the words of the Academy, it went to Dylan “for having created new poetic expressions within the great American song tradition”. I couldn’t be happier over their decision.

A final note. While dismissed by many who just like his “old stuff”, Dylan’s output following his lost decade of the 1980’s is exceptionally rich and rewarding, containing some of his best songs. But they are no longer anthems of a generation. They don’t impact society the way Dylan did all those years ago. So they tend not be listened to all that much. And, as always, some are put off by his voice, now in heavy croak mode. But Dylan still knows how to wind it around his consistently-brilliant, deep lyrics. Plus, his veteran band fits him like a glove. Start with the under-rated Oh Mercy (1989), all the way to Modern Times, released in 2006 when Bob was 65, which I would put in the top five among all his albums. I could go on and on.

Never expect the expected from Bob. Frank Sinatra covers, anyone? As he sang more than 50 years ago:

And if my thought dreams could be seen

They’d probably put my head in a guillotine/

But it’s alright, Ma, it’s life, and life only.

A few years ago, I put together my list of Dylan’s Top 100 Songs (reduced a bit). It wasn’t easy. So many favourites didn’t even make the cut. Imagine, not just a few great songs, but more than a hundred. Anyway, here it is, with selections more  or less chronological. Enjoy and nitpick away.

Girl from the North Country.    Masters of War.    A Hard Rain’s A-Gonna Fall.

The Times They Are A-Changin’.    The Ballad of Hollis Brown.    When the Ship Comes In.

Boots of Spanish Leather.    With God on Our Side.    One Too Many Mornings.

The Lonesome Death of Hattie Carroll.    Chimes of Freedom.    It Ain’t Me Babe.

To Ramona.    My Back Pages.    Subterranean Homesick Blues.    She Belongs to Me.

It Takes a Lot to Laugh, It Takes a Train to Cry.    Maggie’s Farm.

Like a Rolling Stone.    Queen Jane Approximately.    Ballad of a Thin Man.

Sad-Eyed Lady of the Lowlands.    I Shall Be Released.    All Along the Watchtower.

I Dreamed I Saw Saint Augustine.    I’ll Be Your Baby Tonight.    I Threw It All Away.

Day of the Locusts.    Knockin’ On Heaven’s Door.    Forever Young.

On a Night Like This.    Simple Twist of Fate.    Shelter From the Storm.

You’re Gonna Make Me Lonesome When You Go.    Hurricane.    Romance in Durango.

Black Diamond Bay.    Where Are You Tonight (Journey Through Dark Heat).

When the Night Comes Falling from the Sky.    Dark Eyes.    Political World.

Everything is Broken.    Man in the Long Black Coat.    Most of the Time (bootleg version).

You might also wish to read these stories on F&O:

Rod Mickleburgh has been a journalist for more than 40 years, with stops just about everywhere, from Penticton to Paris to Peking. Managed a few awards and nominations along the way, but highlight was co-winning Canada’s Michener Award with my highly-esteemed Globe and Mail colleague, Andre Picard, for our coverage of Canada’s tainted blood scandal. Left the Globe, my reporting home for more than 22 years, in the summer of 2013. Have my name on two books: Rare Courage, containing first person-accounts from 20 veterans of World War Two, and The Art of the Impossible, a tale of the wild and wooly 39 months of British Columbia’s first New Democratic Party government led by Dave Barrett. Co-authored with Geoff Meggs, The Art of the Impossible won the Hubert Evans Prize for non-fiction at the 2013 British Columbia Book Awards. Currently investigating time management, without regular deadlines. Visit Rod Mickleburgh’s WordPress site, Mickleblog.  His previous piece on F&O was “Feeling the Bern.” Excerpt:

The 74-year old, white-haired politician advanced to the podium, and the roof nearly came off the Hudson’s Bay High School gymnasium. No wonder. For nearly four hours, thousands of us had been standing in line, braving a cold, miserable rain, without even knowing whether we would be among the 5,000 or so lucky enough to make it inside. As the cheers continued to cascade down from the packed, rickety benches of the high school gym, Bernie Sanders leaned forward and shouted in his hoarse, Brooklynese. “All I can say is: WHOA!”

Facts and Opinions is a boutique journal, of reporting and analysis in words and images, without borders. Independent, non-partisan and employee-owned, F&O is funded only by you, our readers. We are ad-free and spam-free, and we do not solicit donations from partisan organizations.  Please visit our Subscribe page to chip in at least .27 for one story or $1 for a day site pass. Please tell others about us, and follow us on Facebook and Twitter.